Written by SumoMenkoMan at 2:32 AM
Today was a sad day for MASH tv show fans as David Ogden Stiers, better known as Major Charles Winchester III, passed away at the age of 75.  His role fit really nicely into the show earning two Emmy nominations for his performance.  Back in 1982, Donruss capitalized on the success of the show with this 66-card set.  The complete checklist can be found here on The Trading Card Database.  Surprisingly, this pack has gum...I thought Donruss and Fleer could print cards, just not with any gum in there.  Or maybe that is just for baseball.   Also, did you know that there were 125 million people watching the finale of MASH in 1983?  It was that popular.  Anyway, grab your favorite moonshine distilled alcohol and a box of MREs....let's slice this pack open. 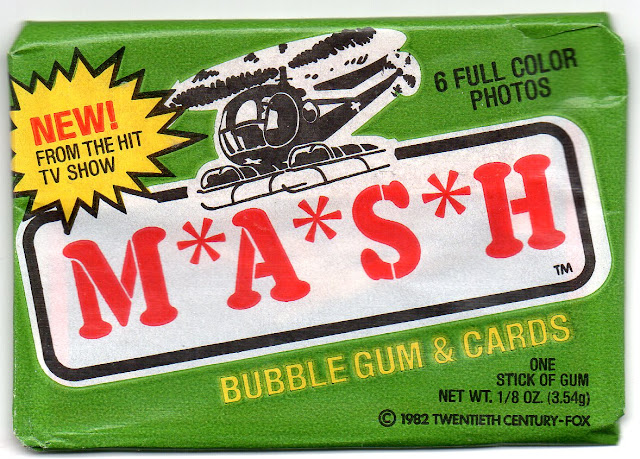 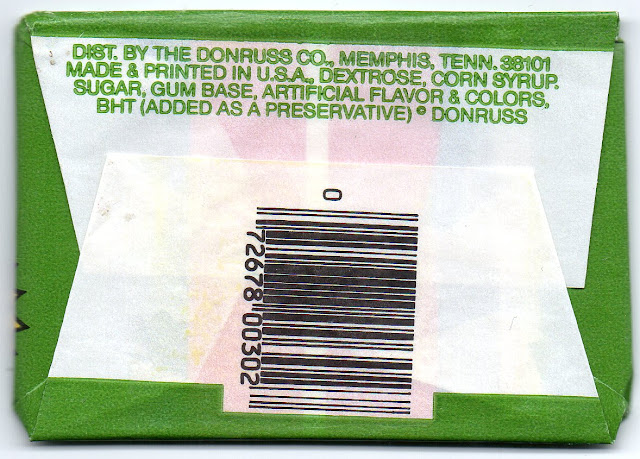 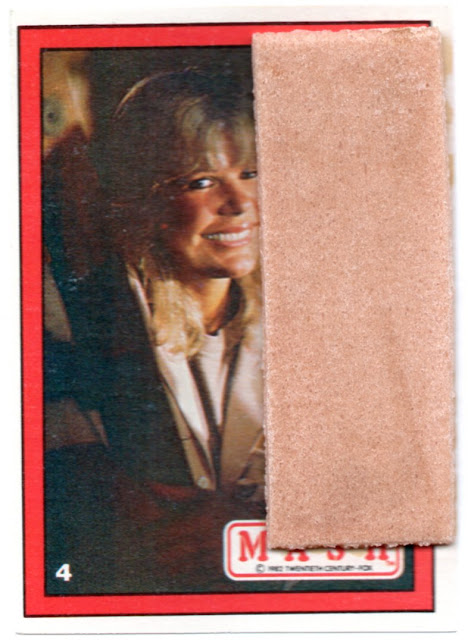 #4-Margaret (Major Houlihan):  First card right out of the gate is the gum card.  Here she is peaking out from behind this 36 year piece of sugary goodness. 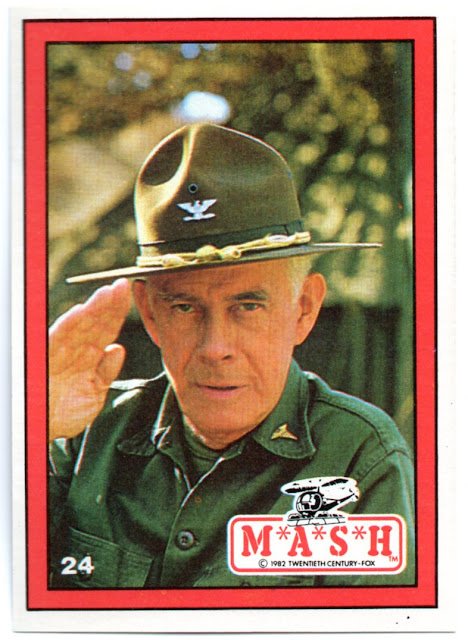 #24-Col Potter:  This is a legit card.  One of the best characters from the series.  Sadly we lost Harry Morgan back in 2011. 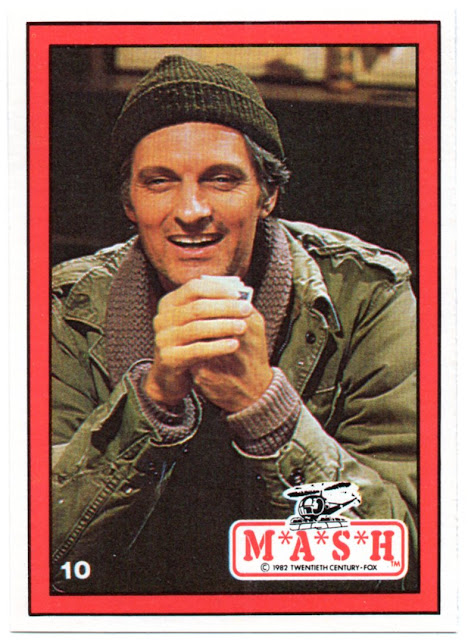 #10-Hawkeye(Alan Alda) - Alan won tons of awards for his role as Captain Pierce. 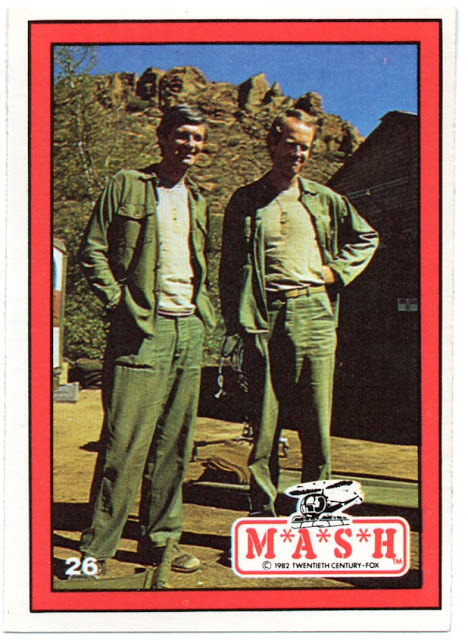 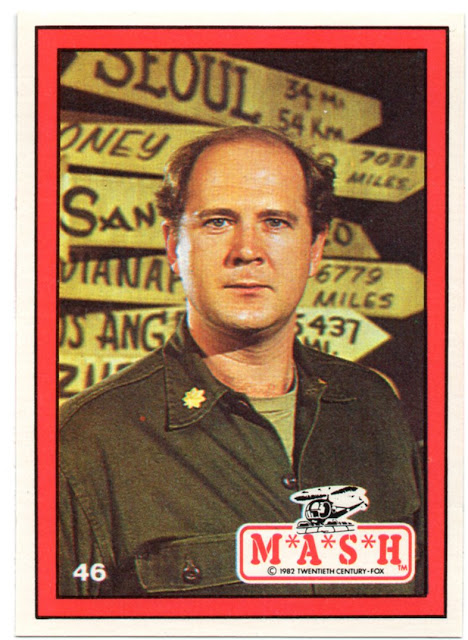 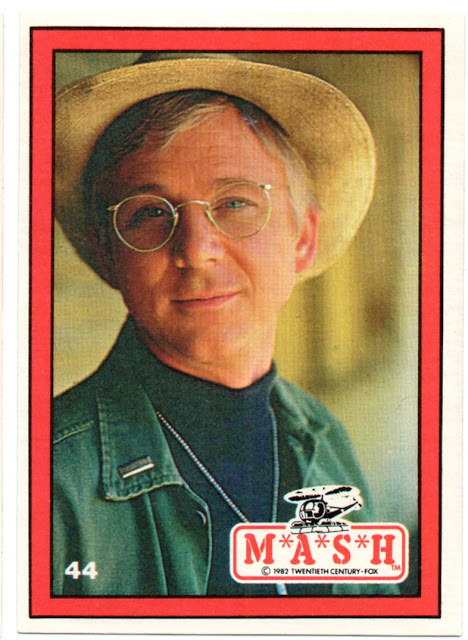 
The backs are a puzzle image, but wait there's more.  The puzzle requires 121 pieces...and each of these 121 pieces can be found with two different card fronts.  So a master sets of MASH cards is 242 different cards.  Crazy.... 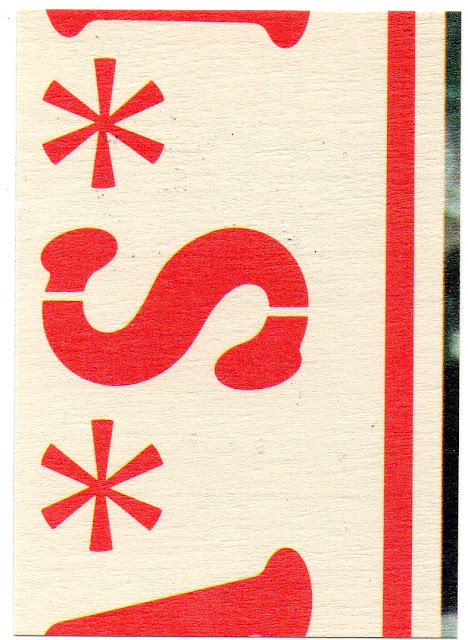 There you have it.  I hope your week goes smoothly!

Is this your blog?

Hey Dan, no I post here on occasion though.

MASH was a staple of mine as a kid. I've seen every episode so many times and I can still sit down and watch this show. It really was ahead of it's time. I hate seeing the actors from the series passing. Great post and glad you were able to pull a David Ogden Stein. May he RIP.

I'm betting it's your autocorrect's fault, but the actor's name was David Ogden Stiers, not Stein. Besides MASH he was wonderful as the voice of Cogsworth in Beauty and the Beast (1991), and as the alien scientist in the classic Star Trek: TNG episode Half A Life (worth seeing even if you're not a Trekker).

As you speculated, the no-gum thing was just for baseball. Topps had exclusive contracts with players for baseball cards by themselves, or with "gum or other confectionery products". The idea was to allow things like Kellogg's to continue. In 1980, Fleer won a case charging that this was an unfair monopoly, and so Fleer and Donruss were able to produce 1981 sets, with gum. Topps won an appeal, though, and then the companies and the player's association came up with the idea of putting something else in place of the gum as a loophole. Thus the logo stickers in Fleer, the puzzle pieces in Donruss, and later things like the trivia cards in SportFlics.

I was never into this show, I was too young to remember it well. I do vaguely remember my dad watching it. It's actually on the TV as I type this. My fiance (who is younger than I) watched it as a kid and loves the show.

I bought her a set of 90210 cards last year and she loved it. I'm going to have to find these for her. Didn't even know this existed. Thank you so much for sharing!

I watched the show in first run and was a big fan. It's one of those shows I don't tend to watch much in re-runs buy co-incidentally I watched an episode this past week that featured Major Winchester. Love Alan Alda even more for his PBS work.

Loved MASH. Some years ago I got the full set of these cards. However the puzzle backs are not correlated correctly. In other words to have complete puzzle backs you need more than just a full set. As Usual the Jeff Allender's website comes to the rescue with identifying what is what. After many years I still haven't figured out which variants I need for this set.
http://www.nslists.com/mash.htm

Brett, thanks for the catch. I updated the post...not sure what I was thinking or if the computer helped me on that one. I appreciate the background on the gum.

CaptKirk42 - I still don't have a good grasp of how the puzzle backs work.

I grew up in a household that watched MASH religiously. It wasn't necessarily my favorite show, but my parents and siblings sure loved it. After hearing about all of the accolades its received over the years, I probably need to just sit down and give it a shot again.

Why 121 pieces if there are 66 cards? I just bought a complete card set and I couldn't put the puzzle together. I'd be curious to know where you found this information, because I can't find anything about it online.