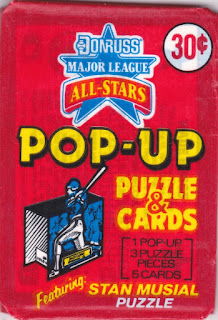 For possibly the first time since I've been posting here, I couldn't really decide what to call this set. I've always called it "Donruss All-Stars", but the pack always suggests something else. For what it's worth, someone posted a pack here at one time under "1988 Donruss Pop-Up" but that was actually the set released in 1989 that commemorated the 1988 All-Star Game. 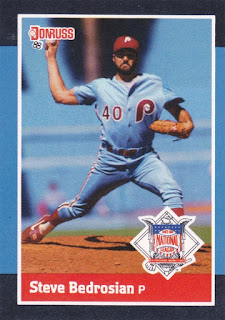 61 - Steve Bedrosian - First up is the guy they called Bedrock. As you can see, the design follows the regular '88 Donruss set closely, but the border is simplified a bit. 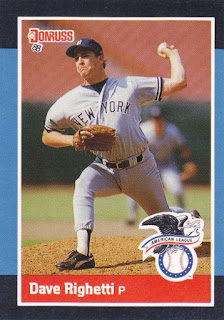 29 - Dave Righetti - Another top reliever of the day. Most of his talents were wasted, however, on some pretty unremarkable Yankees teams. 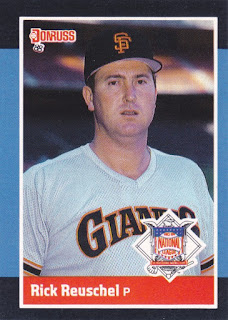 52 - Rick Reuschel - Our third straight pitcher is the ace of the Giants. Well... future ace. Where you might assume that these are photos from the '87 All-Star Game, this shows Reuschel at some other point as he was still with the Pirates at the time. The back of this card has the Pirates team name and logo and makes no mention of his late season trade to San Francisco. 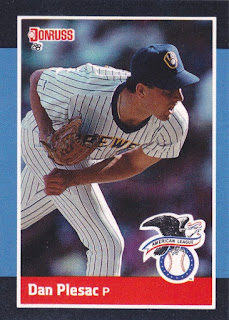 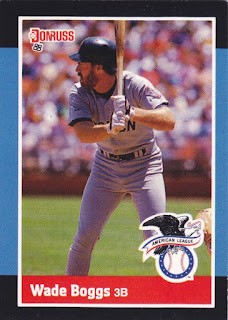 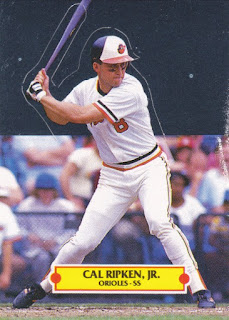 - Cal Ripken Pop-Up - Oh yes, there's more! Remember the whole "Pop-Up" thing on the wrapper? I have one of these propped up on my desk at work, but it's of Whitey Herzog from the next year's set if I recall. 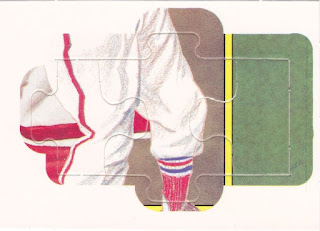 52/53/54 - Stan Musial Puzzle - Less exciting is the requisite puzzle pieces that Donruss throws in to every pack. Nothing against the Musial puzzle (it's great!), but it would be nice if they chose a different subject for a different set instead of recycling the regular Donruss puzzle.

The pop-ups would be a cool subset to collect.

Not sure I've ever actually popped one of these up. I think all of the ones I own are still flat.