Written by jacobmrley at 7:58 PM
I was putting together a page of 1980s Glossy Inserts recently and while trying to locate a 1987 rookie I found a seller on eBay that had these big ass 101-card beauties cheaper than any of the individual cards.  I remember opening a bunch of these in 1988 (they were supermarket exclusives, thanks Pathmark!) but I never saw any in 1987 - or any other year for that matter - so this will be a new way to inject more of the billions of 1987 Topps cards into my collection.  That is Nick Esasky, Jim Acker, and Bobby Witt on the fronts and backs and Eric King will be my fancy glossy rookie.

I am not going to bore you with all 101 cards but I will highlight the bestest cards that came out of this monster.  First off, third card right off the bat I got a Barry Larkin rookie card.  That made this purchase totally worthwhile.  Everything else is wood-grained gravy from here on in. Along with the glossy rookie, I also got Eric King's base card.  I think this now makes me an Eric King super collector. 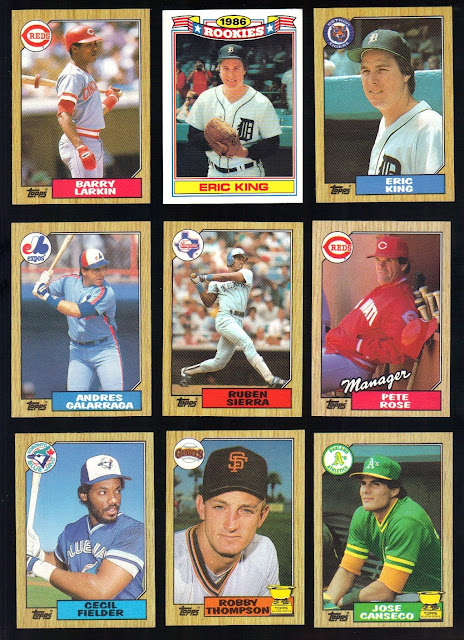 1987 was renowned for its rookie cards and I got more than Larkin, I got Andres Galarraga, Ruben Sierra, and Jose Canseco with a fancy rookie cup.  I put the other rookie cup card I got (Robby Thompson) along with Pete Rose and Cecil Fielder because I like Pete Rose and Cecil Fielder, dammit.  Plus those are a couple cards with great understated baseball photos on them too.

I got four different Mets card in here, which is normally pretty exciting except I have every Met from 1987 86 times over again.  But hey, I have always loved that Ray Knight picture and that is a great picture of Howard Johnson before he magically gained 40 pounds of muscle and started hitting 30 homers a year.  Wonder how that happened?   You also see that bespectacled players like Daryl Boston once existed. 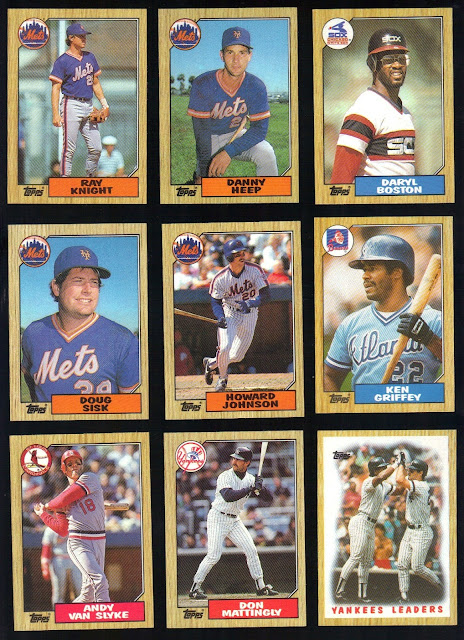 You can also see I got the wrong Ken Griffey (2 years early on that one), two different Don Mattingly cards, which would have made this a killer pack back in 1987, and while I never liked the teams Andy Van Slyke was on (the Cardinals and the Pirates teams that always seemed to beat the Mets out for the NL East crown) I always liked his style as a player.  That's a pretty cool shot of his follow through.  There were a few other cool players like Fernando Valenzuela and a Dave Parker all star card, but they just didn't make the top 18 and I can't justify a third scan of 1987 Topps.

Ah, but there is one major unresolved issue: what to do with the gum?  Now, most 30-old wax pack or cello pack gum practically turns to dust in you hands but this particular gum has been hermetically sealed oh these 33 years so it is still sturdy and in tact.  In fact, the cards still had that sort of vague magic bubble gum smell that we all miss so much from our cardboard.  Do you dare me? Should I? 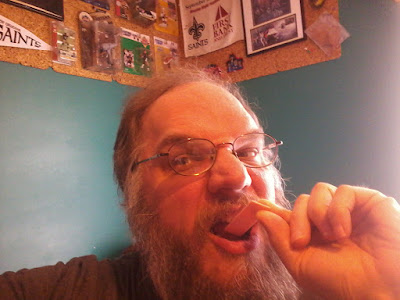 Psyche! I am no fool, no matter what day it may be.

I invested a lot of money in those packs back in the day. A "hot" pack for sure. That was close one with the gum...you are braver than I.

That Darryl Boston seems so odd to me. Almost like he has a portrait background behind him.

I can't help but love that set! As iconic as that Canseco card is, I always focus on how skinny his arms are on it!

@madding A little pink air brushing might have put this pack over the top into the hall of fame.