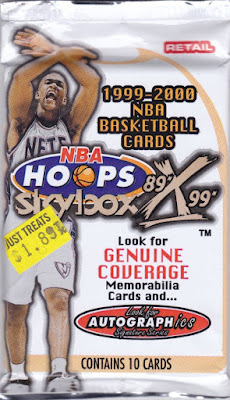 Here's a pack commemorating the ten year anniversary of the NBA Hoops brand, which had changed hands a couple (?) of times at this point. At the time, it was under the direction of Fleer. But before we get into the cards, I want to talk about the wrapper. What is going on with the unnamed Nets player here? I assume this is after his follow-through on a shot or something, but it could seriously be all sorts of other things. Is he calling desperately for the ball? Does he have sudden tremendous back pain? I also am not proud to say I don't know who this is. Kerry Kittles and Stephon Marbury were probably the Nets biggest names this particular season, but I am not positive that it's either of them. 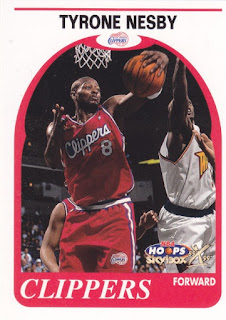 146 - Tyrone Nesby - The card design is obviously a straight-forward copy of the first Hoops set, although the fonts are a little off here as is typical with these things. 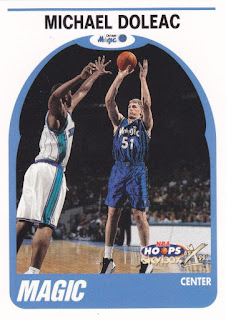 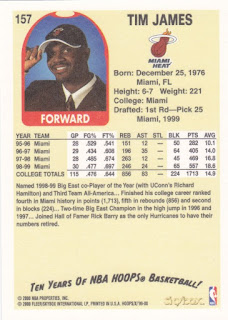 157 - Tim James - Here's a look at the back. Again, they more or less reproduce the original, adding a "Ten Years" slogan at the bottom. 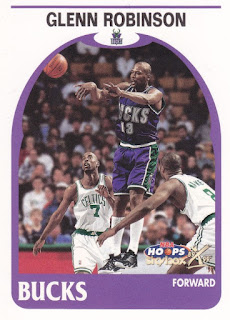 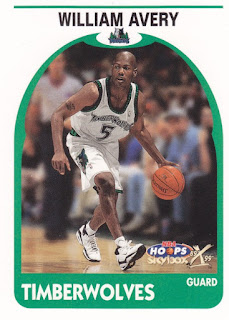 59 - William Avery - For some reason the Wolves were one of my favorite teams to play as in the inaugural NBA2K game, which came out this season. My only memories of Avery were as a video game sprite. 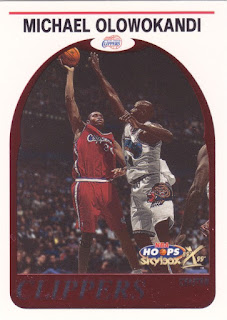 5 - Michael Olowokandi Hoopla - This parallel has a bit of a foil sheen to it. Olowokandi was notoriously a #1 overall pick and while he wasn't necessarily a bad player, his offense always held him back from any chance he had at being a big impact center. That, and, well... Clippers. 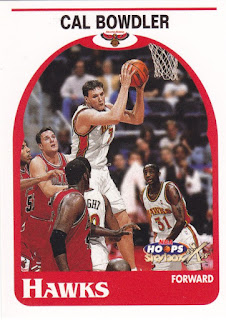 44 - Cal Bowdler - This is the first time I've ever heard this name before. 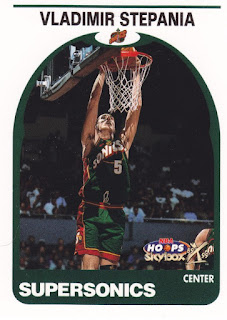 34 - Vladimir Stepania - Stepania was mostly a backup in the league, and ended his career rather early after an age 28 season with the stumbling Blazers. 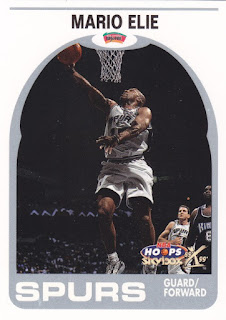 173 - Mario Elie - When I think of Mario Elie, the words "crafty dude" come to mind. Also, he won 3 titles. I wish he had been able to play with the Blazers for longer. 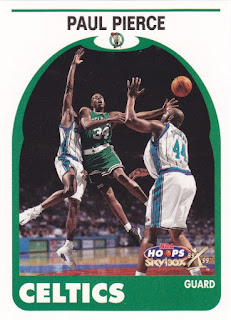 97 - Paul Pierce - Well, this pack was kind of a dud, wasn't it? At least Paul Pierce is here to give it a bit of legitmacy.

Cat Bowdler sounds like a villain in a Sherlock Holmes knock off story written by someone in the 1930s.

I've always thought of Hoops and Skybox as two different brands. The former was the normal conventional card. The latter was the goofy fun card. Combining them seems weird.

Gotta imagine that Olowokandi parallel rookie was probably worth something when these were released.

I didn't even know that Hoops Decade ever came in retail? I only ever saw, and bought, it from card shops way back when. This set produced a lot of neat inserts and parallels, most of which still look really good.

I always thought it was Marbury on the wrapper...