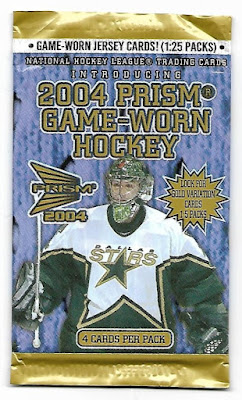 The pack says 2004 Prism, but Pacific had a habit of living in the future.  The set consists of 100 card base set plus 50 SP games used cards.  This 4 card pack is the retail version.  The hobby pack had one Game-Use Jersey per pack. 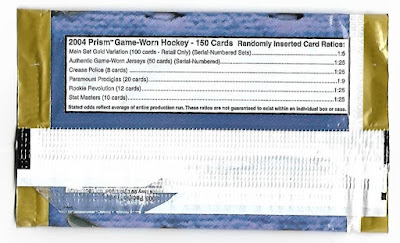 These cards are shiny.   The base have a sort of teal foil.  The team logo is scattered throughout the foil background.  My Scanner doesn't pick it up very well.   I really like the design of base card fronts.  The shiney isn't overpowering and the bottom framing gives off an Art Deco vibe. 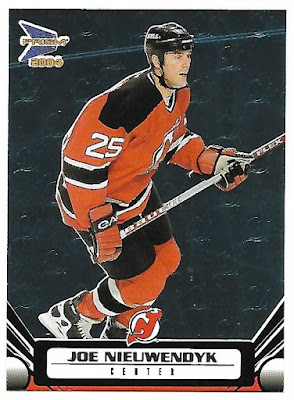 #64 Joe Nieuwendyk -  Joe won his third career Stanley Cup in 2003.  Each time was with a different team.  The line behind Joe's head is on the card.  It seems like a printing error since other cards I see of this one don't have the line. 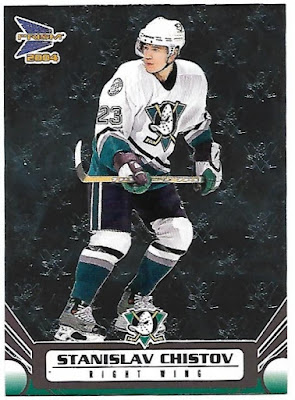 #1 Stanislav Chistov - A promising rookie had a short career and it was all downhill after this card. 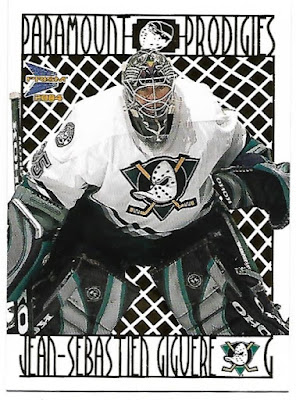 #2 Jean-Sebastien Giguere Paramount Prodigies - An insert card, seeded a one every nine packs.  In person, the netting and fonts are a shiny gold.  Much nicer card in person.  I like the Art Deco style of the letters.  I believe the symbol between "Paramount" and "Prodigies" is a hockey helmet with a full cage.  At first I thought it was an Owl. 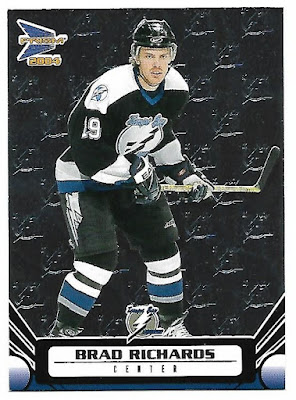 #91 Brad Richards - We got a recent Cup winner in Nieuwendyk, 2003, and we also get the next Cup winner in Richards.  Richards not only won the Cup in 2004, but was also won the Conn Smythe trophy, as playoffs MVP. 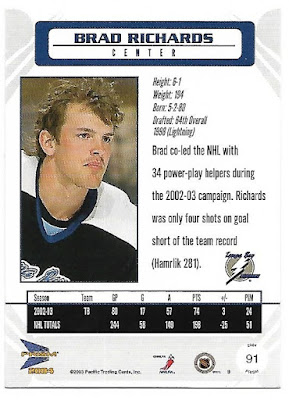 Here is the back of a base card.  Fairly plain compared to the shiny fronts.  +1 point for using a different picture on the back for the head shot.  All three base cards I got in the pack had a head shot on the back.  -1 point for only having on season of stats.  The back could be confused with Panani.