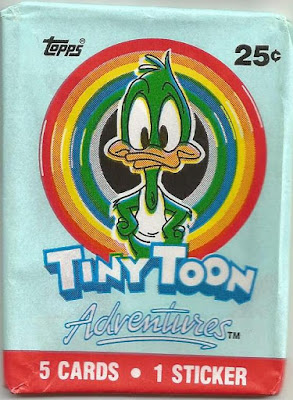 In 1991, cardboard connections to anything and everything were in full effect. Topps released a card set based on the TV show "Tiny Toon Adventures," which featured Loony Toon characters as kids, basically. Each pack has 5 cards and 1 sticker.

The cards themselves feature a blue border with an inset image of the character or scene. The vertical insets look like a photograph placed in a photo album with little black decorative accents. The horizontal ones do not feature the little black "holders." The card number appears on the front of the card in a rainbow circle. 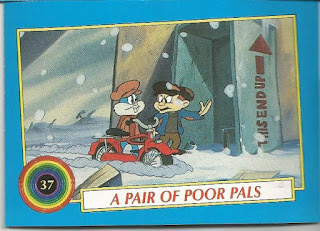 I did not get a scan of the backs, but they feature a story that is told in series from card to card and each back story relates to the image on the front.