Written by SumoMenkoMan at 6:00 AM
While browsing a card shop down in Florida last year, I ran across 9 packs of these U.S. Customs Service Canine Enforcement Program cards.  Each cellophane pack contains three cards and one sticker as shown in the photos.  Capitalizing on the hype of the trading card industry in the early 1990s, this set highlights different U.S. Customs dogs that were employed to help stop drug smuggling into the United States.  The backs are pretty neat as they detail the dogs breed, weight, and history with the Treasury Department as well as the Most Notable Drug Seizure.  They also measure 2.5" x 3.5" on standard trading card paper stock.  My cards say these are the 1994 series, but I see on eBay that there is a 1991 series for sale with at least 81 cards in that set.  There are also cards all the way up to 1999 and, according to the article below, were fairly popular at the time..  I found this great article on Dog Crazy Books (www.dogcrazybooks.com).

In the early 1990s, the Customs Service began giving anti-drug talks at schools and they would take one of their dogs along to give a demonstration of their abilities. The handlers wanted something that they could hand out to the children and the first trading cards featuring the Customs Service dogs were born.

In 1991, the first series of trading cards was released. These came in cellophane packs of nine and there were nine sets comprising 81 cards in all. They also included a Customs Service sticker. The cards gave the dogs name, the place where they worked, their tatoo[sic] number, breed, age, weight, the year they began customs work and their largest or most notable seizure. It also included an 800 number for reporting suspicious activity.
A second series of 24 cards was released in 1992. Response was so great that another series of 81 cards, these with a blue border, were released in 1994. Series were also released in 1995, 1996, 1997 and 1999. These later series came in packs of four cards.
In 1992, the Customs Service searched for a corporate sponsor to underwrite the expense. Nabisco signed on and one card was included in Milkbone boxes. I do not know if they sponsored the subsequent series.
These cards launched a collecting craze when they came out in the 1990s. The Customs Service repeatedly said that this was a non-commercial venture and that they wouldn't sell the cards. That didn't stop others from selling them. One man even went public with his search, offering $500 for a complete set. Some people began to collect cards which featured a certain breed, while others aimed for cards showing dogs with the highest seizures or those who worked in their hometown. 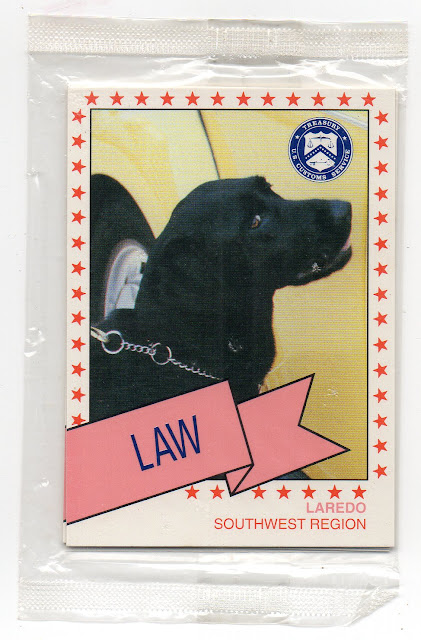 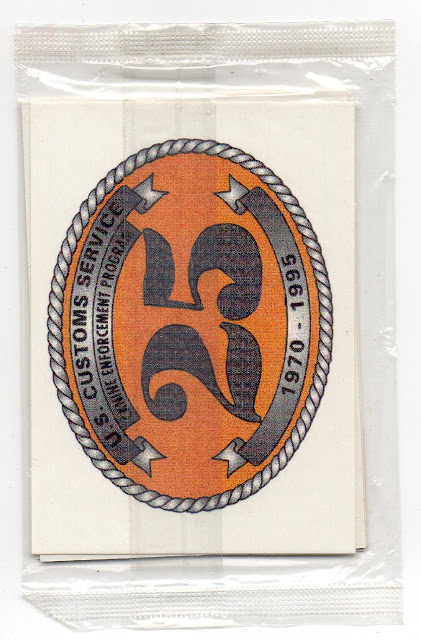 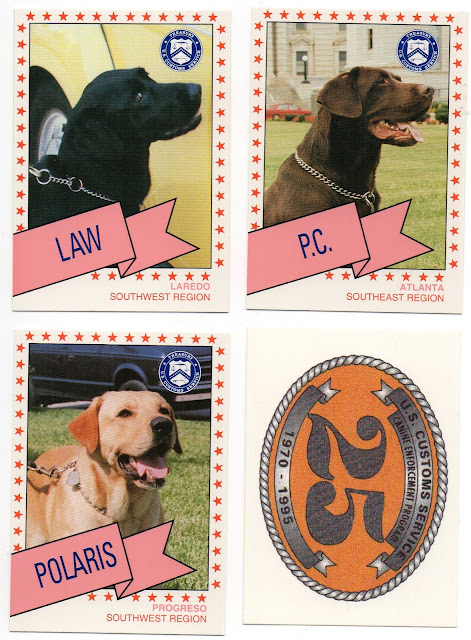 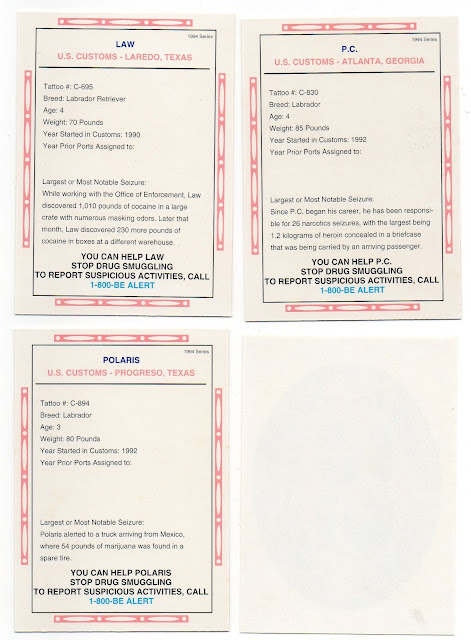 That's pretty cool, I had never seen these before. One of if not the most embarrassed Ive ever been was at a car show years ago, they had a drug sniffing dog there giving demonstrations and after the show he came over and started sniffing my pocket...I had just finished lunch while watching the show and shoved the hot dog wrappers in my pocket!

Nice story....dogs will always be dogs. Ha! It would be cool to have the complete run of these sets.

U.S. Customs service dog trading cards? Gotta love the 90's! Any post about dogs is a HOF post in my book. Cool set.