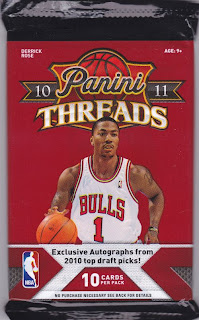 It's a new year, so we may as well do it up right and start things off with some new product. I do wish there was a brand new baseball set to write about, but it seems like there isn't much baseball on the shelves right now during the offseason besides the flashy chromey stuff and Topps Update which has already been well covered by now. 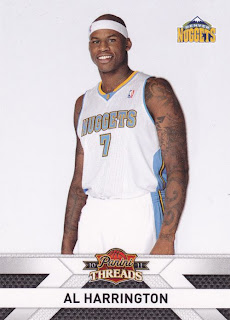 111 - Al Harrington (Harrington had the requisite amount of tattoos to become a member of the Nuggets this past offseason. His numbers have declined steadily since his career year a couple of seasons ago with the Knicks.) 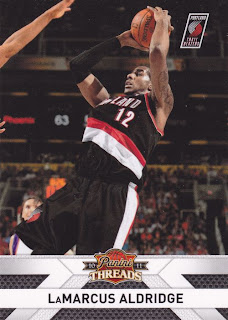 68 - LaMarcus Aldridge (Before the Blazers got Greg Oden, Aldridge had become an instant fave of mine. Since Oden is more of an idea than an actual NBA player at this point, and Aldridge is still undervalued by the league, I should seriously consider collecting the hell out of his stuff.) 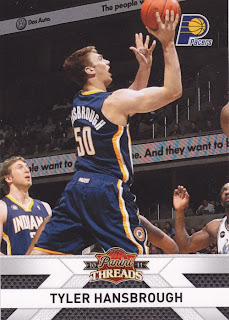 125 - Tyler Hansbrough (Someone give this guy some playing time so there might be some takers for his jersey auto that I pulled a year ago.) 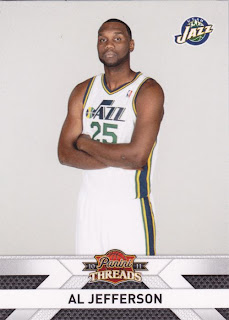 83 - Al Jefferson (I always get Al Harrington and Al Jefferson mixed up. Luckily, this one also switched teams in the offseason.) 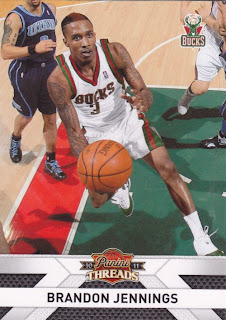 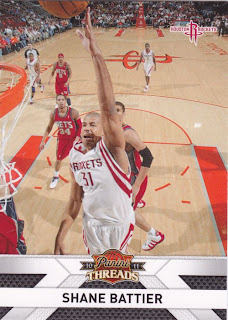 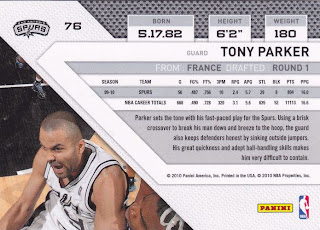 76 - Tony Parker (If you were to say that Tony Parker was on the wrong side of 30, you would be wrong. He just happens to get hurt every season. Watch... now it will happen!) 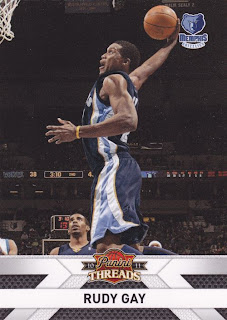 133 - Rudy Gay (Another underappreciated player whose career could likely benefit from a change of scenery.) 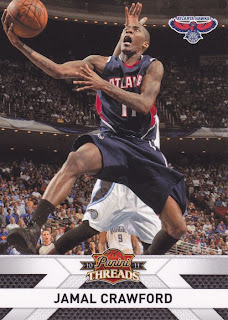 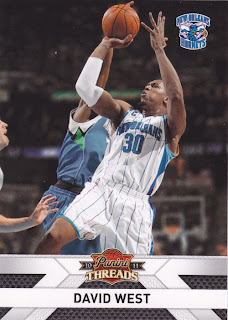 49 - David West (This franchise is on life support. They never should have been allowed to leave Charlotte.)

Anyone that would cheat on Eva Longoria is stupid. Really, really stupid.

For some reason, I don't know why but I love the Panini Threads logo.

Amen on your comment about the Hornets leaving Charlotte. Now that I've found that I can watch Bobcats games down in SC where I live I'm exploring the idea of buying a basketball pack or two. The game has a changed A LOT since I really followed the NBA, but it appears Panini has done a great job w/ this set. The photos are great!

A downside is that it is practically a total design copy from Football threads. Sure, these days Topps saves effort and money by copying their base design across sports, but at least theirs tends to be a little more interesting. This threads design is a bit static, but at least it's clean and legible. IMHO, the Threads design easily is the king in what is an overall smelly stable of card designs.

As far as NBA franchises, there are at least eight I can think of that are on life support, and just on the front side of useless. That league really should contract--it shouldn't be in the zillionaire subsidized-hobby maintenance business.