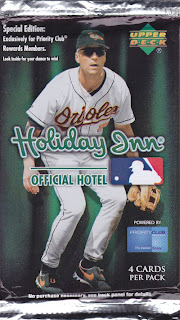 If you were staying in a hotel, and they handed you a pack of baseball cards, wouldn't you be extremely confused? Now, just think about how someone who doesn't even collect cards (and that's most people, folks) would think. They had a stack of these weird promotional packs at a card show I went to a couple of months ago for only a quarter a piece, so I grabbed the whole stack. Here's one of the packs. 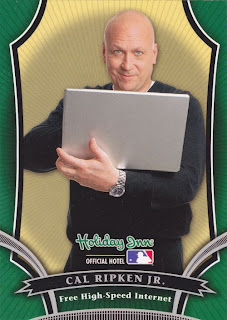 3 of 4 - Cal Ripken Jr. Free High-Speed Internet (Each pack contains a Ripken "insert"/sweepstakes card that is pure comedy gold. Along with this internet one, there's one with awkward bald Cal and his Priority Club card, one with dreamy bald Cal bumpin' CCR on his new iPod and one with creepy bald Cal holding a bunch of pillows.) 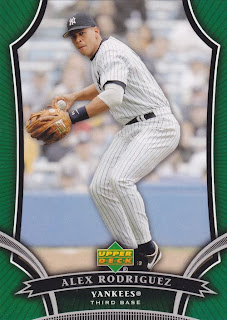 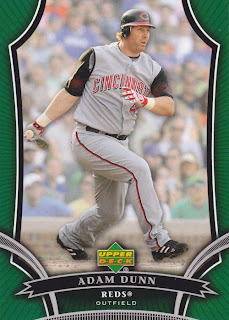 30 of 60 - Adam Dunn (They look more or less like a generic small peripheral set that Upper Deck could have released just about any time in the mid-'00s.) 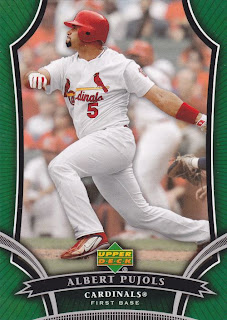 56 of 60 - Albert Pujols (The game's best player has gotten off to a bit of a slow start so far this year.)

I just got the Morneau in a trade recently (never heard of them before); any chance you have the Mauer and would want to trade it?

I'd be interested in that Ripken (or any other Ripken) plus any Braves in the set.

If you would get another Pujols card, could you send it along in a future package for me? I have the Ripkens from the set, but don't have the Pujols. Thanks...

bigbluekt: I can certainly set aside the ARod card for you. Let me know what else you like to collect. I'd prefer to send you a team bag or two. I don't care about book value, but if you're still interested in working out a trade, I have some wantlists at cardsoncards.blogspot.com

rhubarb: I didn't get a Mauer, unfortunately, just the Morneau.

Colbey: No Braves, either, but I'll send you a couple of the Ripkens with your next package.

TSHenson: I'll check on the Pujols. I can't remember if I have it already or not.

AJ: As long as you throw in some Domino's Pizza Quarterback Challenge cards.