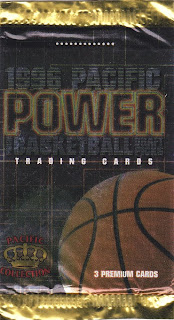 I had no idea what I was getting myself into when I picked this pack out of a dollar bin recently. I knew that it had something to do with basketball and I knew that it hadn't been posted here yet, so I just went for it. 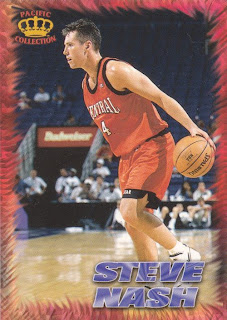 RR-35 - Steve Nash Regents of Roundball (It's pretty remarkable to get a current NBA player out of a draft picks pack that's 15 years old. I'm not sure what's up with that "Central" jersey he has. There certainly aren't many spectators hanging around for whatever this game was. At least Nash has been enjoying himself lately.) 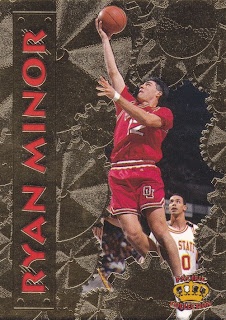 PP-32 - Ryan Minor (Is this the base card? I have no idea. The "Regents of Roundball" cards are listed as an insert with approximately 2 cards per pack. These packs only contain 3 cards. Minor was drafted by the Philadelphia 76ers, but opted to play baseball instead. He actually made the majors as corner infielder, appearing in 142 games in 4 seasons with Baltimore and Montreal.) 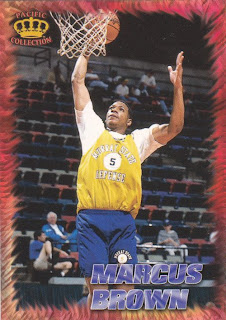 RR-5 - Marcus Brown Regents of Roundball (Brown was a Blazers draft pick, but he didn't stick around long. He also played a handful of games with Detroit before embarking on a long and successful overseas career which continues to this day.)

You forgot the most interesting factoid about Ryan Minor -- he is the player who replaced Cal Ripken, Jr. in the game that ended Ripken's Ironman streak.

I'm curious about Nash's Central jersey too... I followed him while he was a Bronco @ Santa Clara... but never heard of Team Central.

I think it has to do with when he played in the 1993 Canada Games. Seems like the most logical choice???

bigbluekt - Oh... that would make sense. Didn't consider that.

That doesn't really explain it. "Central" wouldn't really have any significance. I think participants represented each province, not a region. And the photo doesn't look like it's from 1993. Nash was still a teenager then. I'm guessing it was from some college "all-star" type showcase game that no one cared to attend (as you can see by the background.)