Written by Jafronius at 11:45 PM
Greetings!

﻿So when does the Hot Stove season officially begin?  Once the World Series is done?  When the winter meetings begin?  Not sure.  Us Cubs fans are certainly interested in what Theo Epstein and his team can do.  Hopefully the majority of fans are reasonable and will not expect a huge turnaround in the first year.  Fans have waited 103 or so years, what's a few more? 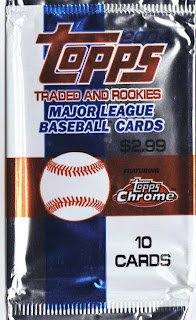 ﻿
﻿Ten cards per pack, featuring Topps Chrome.  It does not say how many Chrome cards can be in a pack, but the back says a Chrome Refractor Parallel is 1:12.  Let's see what we get:

After eight pretty decent years with Reds, Sanders proceeds to spend a year each in San Diego, Atlanta, Arizona, San Francisco, and Pittsburgh before winding up with St. Louis.
﻿ 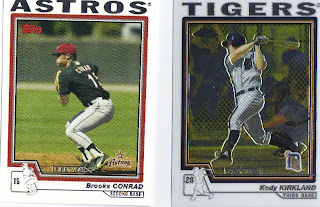 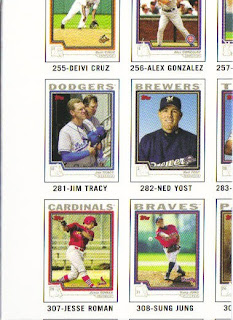 Here's something that confuses me (big deal, I'm confused by a lot of things).  The 10 checklists in the set are a part of a huge puzzle where you can assemble an image of the entire 2004 set.  This is the only pack I have so I don't know if every pack has a checklist.  It also appears to be random, i.e. the 10 Traded checklists are not the last 10 cards of the puzzle, as evidenced by this checklist holding images from Series 1. 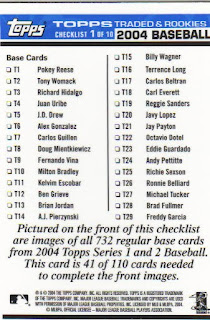 ﻿No #:  Checklist 1 of 10 (back):  Here's the back.  Holy crap, you need 110 cards to complete the whole thing?  There are 10 checklists for the Traded set, so there's a 100 cards left.  I checked my 2004 cards and I don't have any other checklists.  How often were these things seeded?  Are there really 50 checklist cards for both Series 1 and 2, or did they use other cards for the puzzle?  Does anyone have the complete puzzle?

Also, seriously, Topps, Pokey Reese is the first card in the Traded set?  There were no All-Stars you could have used?  I mean, Carlos Beltran and Andy Pettitte are right there on the checklist! 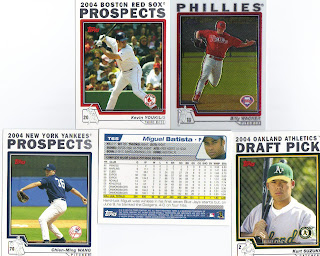 Nice group of cards to end the pack.  Me thinks the Chromes I got are not the Refrator Parallel.  Showing the back of the Batista card since the front is pretty boring.  Also, the picture they have for Miguel is the same as the front of the card.  The other cards have a different shot.

Anyway, that's the pack.  Looking forward to Hot Stove season, whenever that starts.  Thanks for reading!

Email ThisBlogThis!Share to TwitterShare to FacebookShare to Pinterest
Labels: 2004 Topps Traded and Rookies

I bought a blaster of these once, so I have some of those checklist cards. Very weird.

I believe the Hot Stove season started officially when Jim Thome signed with the Phillies yesterday.

Nice pack. If people actually chased base cards, that one would be a winner.