Written by Jafronius at 11:53 PM
Greetings!


So, it appears madding and I have been trading sport card volleys and everyone else is content to watch.  I'm new to the game, so perhaps this is the equivalent to the off-season here at APTBNL. 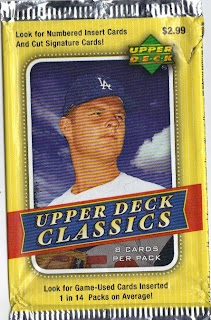 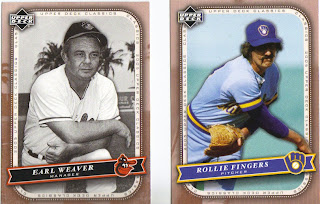 I wonder if the backgrounds for the cards in the set were photoshopped.  I mean, it appears Rollie's pitching on the beach or something.  In any event, it's a nice start, especially since I don't see many Rollie-as-a-Brewer cards. 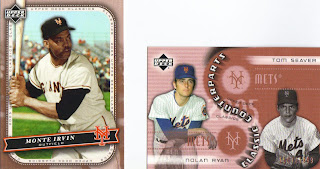 The serial number's on the bottom right corner of the card.  It's almost hidden there; it took me a while to realize that it was numbered.  The back of the pack says these are seeded 1 in every 14 packs. 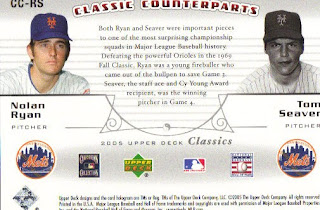 Here's the back of the card for those who are interested. 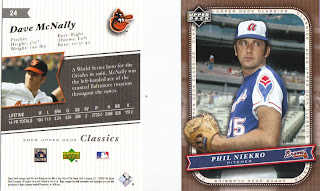 Not very impressed with the card backs.  The picture's the same as the front, and there's just a brief career summary and lifetime stats.  The team logo for that era is prominently displayed, though...and by the way, welcome back, cartoon Oriole! 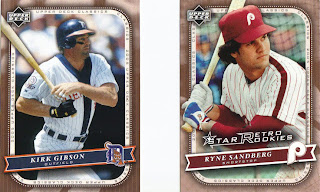 The Ryno Retro Rookie ris ra rinner, er, winner of this pack.  The pack says the RSR's seeded one in every 4 packs.  Other Rookies include Mickey Mantle, Mike Schmidt, Nolan Ryan, Ted Williams, and Tony Gwynn.

Anyway, that's the pack.  I would have definitely gotten more if there were more to get.

Hope everyone has a great Thanksgiving.  If I remember right, K-Mart's having a 20% off sale on trading cards.

I am thankful for finding this blog, as the contributions of all of you has made it possible for someone like me to see cards from packs I would never have bought (and in some cases, thankful I didn't buy them when I had the chance).  Thanks for reading!

I don't think I've ever seen a Ryne Sandberg Phillies card before. Not bad.

I bought a box of these back in 2005 and I've been collecting autographs on them TTM.

They look great with a signature on them, but they really aren't that special.

I have a complete base set. The color red really pops on these cards,
http://canthavetoomanycards.blogspot.com/2009/08/red.html