Written by Jafronius at 12:11 AM
Greetings!

Hope everyone enjoyed the Super Bowl, whether it's the game itself, the commercials, or Madonna's Halftime Show (hey, there could be a reader).

Found this pack at the LCS a while back for a buck.  Looks like the pack has "increased" in value, since the faded Rite Aid sticker appears to say $.69.  Hope I don't get jipped.  Here's some 1993 Topps Football! 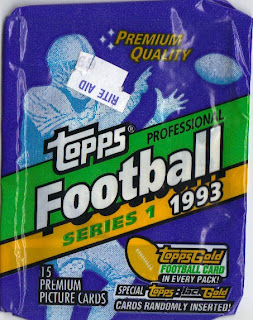 The Cowboys won that year, beating the Bills (this was during the 4 consecutive appearance streak by Buffalo, with Buffalo losing all 4 contests.  That's gotta hurt...a lot).  Let's see what we got:

Showing the back of the Hamilton card; the front image is of him taking a breather with his helmet half off.  As you can assume, I'm not real big into football, so I can't tell you much of anything on the non-stars.

Turns out I didn't have to scan the back of Keith's card.  Topps was still doing their ToppsGold thing, so I get a Schlereth sandwich (for the uninitiated, the card is the same on the front except the name, team, and Topps logo are gold...GOLD!!!).  The ToppsGold card came one per pack.

Love him or hate him, getting a 3rd year Favre card is pretty good.  Win for me!

The big rookies in this set are Drew Bledsoe, Michael Strahan, and Jermone Bettis.  At this point, Rodney's two years away from letting the wife bring home the bacon.

Anyway, that's the pack.  Getting the young Favre makes the pack worthwhile.  More later...thanks for reading!