I don't know what to say about this one.  Suffice it to say that these packs probably frequent many a repack box, waiting to greet an unsuspecting young baseball card collector.  Said card collector then went to an adult and asked, "what is this?"  The adult then has to console the young collector and convince him / her that the industry has gotten better since these cards were first released.  Here's some 1992 Confex The Baseball Enquirer! 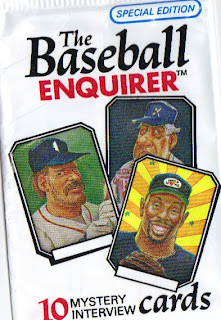 I see no need to write something up for this pack, so I'll borrow from the interweb.  Here's an brief write up on the set (someone wrote about this set?), as well as a checklist.  The pack even made an appearance on our sister site (?).

Here's the back of the pack, and the highlight of the whole thing: 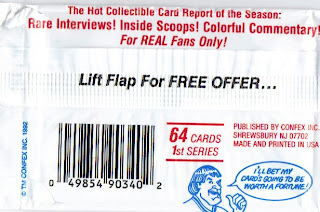 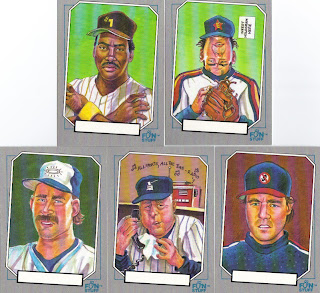 Here are the backs of the cards, simulating an "interview" with the unnamed player.  Hilarity ensues: 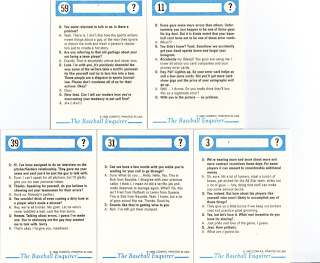 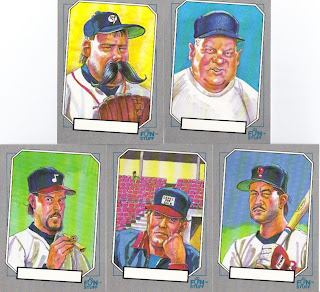 And here are the backs: 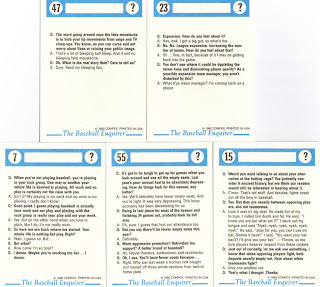 And that's the pack.  They may have been topical (and maybe even funny) back in the early 1990's, but it doesn't hold up nowadays.  True junk wax.  Two parting thoughts:

1.  The top of the pack says it's a "special edition".  I wonder how awesome the regular edition is.

B.  The back of the pack says it's the "1st series".  I'll leave it to you guys and gals to hunt down and post a pack of the second series.

Email ThisBlogThis!Share to TwitterShare to FacebookShare to Pinterest
Labels: 1992 Confex The Baseball Enquirer

part of me likes this as something like flash cards, but I wouldn't consider them collectible.