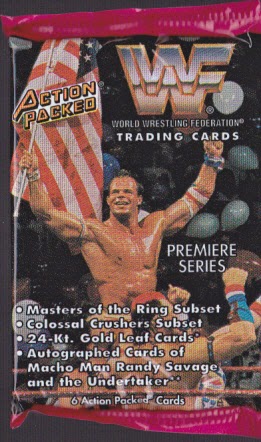 Wrestlemania 30 is tomorrow and who's watching?  Who remember the brand Action Packed? The cards with round corners, "3D" printing, and claims of printed in gold. After football and NASCAR they armed themselves with WWF (at the time) license to print cards. The pack contain 6 cards. The cover is from Summerslam 93 when Lex Luger celebrating his win against Yokozuna via countout. Interesting note on back of the pack.

They offered second chance sweepstakes and one of items you must do to enter is supply your social security number. Old fashion way of ID theft. 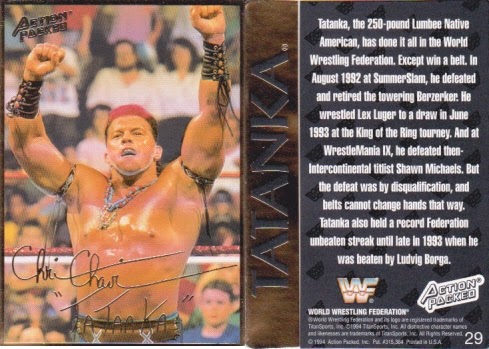 29 - Tatanka - funny how his real name is on the "gold" printed signature. Was "undefeated" for over year and half til he met Ludvig Borga and made the loss column for first time ever. Turned bad guy in 1994 joining Ted DiBiase Million Dollar Corporation and stuck around til 1996. Returned around summer of 2005 til early 2007. 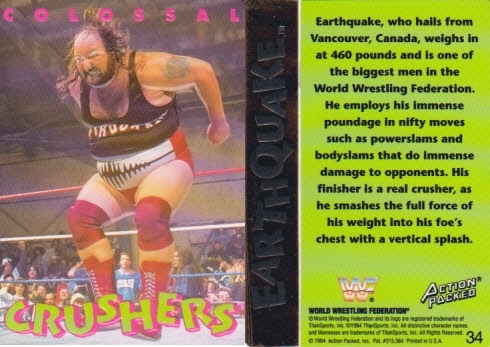 34 - Earthquake (Colossal Crushers) - John Tenta, my first ever favorite bad guy. When I started watching in 1991 I saw him sit on his opponent thinking it was coolest thing ever. He wound up WCW in late 1994 to 1997. Returned back to WWE in 1998 being part of Oddities wearing a mask name Golga. Sadly passed away from cancer in 2006. 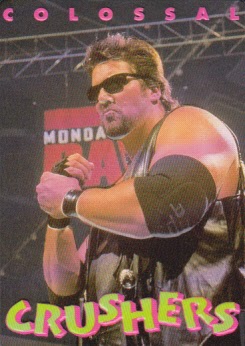 31 - Diesel (Colossal Crushers) - the wrestler known as Kevin Nash. He became champion in 1995 where he happened to be lowest drawing champion in company history. Went to WCW in 1996 along with Scott Hall forming revolutionary and successful New World Order group with Hulk Hogan. While there he played backstage politics (along with many) that sent WCW from top to the bottom that WWF bought them out. Made several returns to WWE but never that successful. Also one of biggest BS'er in wrestling. 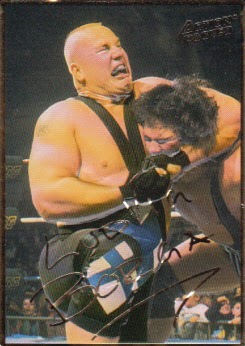 6 - Ludvig Borga - Before making his way to WWF he was piling his trade in Japan under his name Tony Halme. He gave Tatanka his first ever WWE loss. Played the usual boo seeking anti-American bad guy. He left in early 1994 after suffering broken ankle. Was part of Finland parliament from 2003-2007 where he called then president a lesbian. He committed suicide in 2010. Even legendary good ol' Jim Ross didn't have kind comments about him. 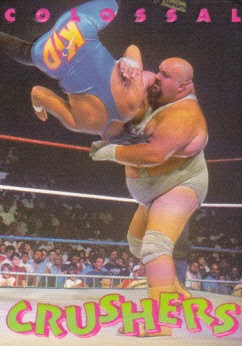 33 - Bastion Booger (Colossal Crushers) - poor Mike Shaw getting saddled with another Wrestlecrap worthy gimmick. He played as a giant fat slob to perfection. He was gone by summer of 1994 and made one-time appearance in 2007. He died of heart attack in 2010. This pack is getting depressing. 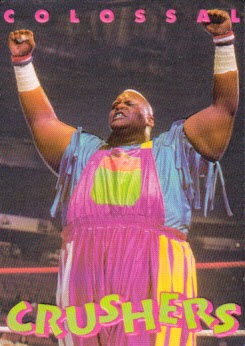 35 - Mabel (Colossal Crushers) - this pack is officially depressing. Mabel went on as Viscera then to Big Daddy V. He passed away in February on a heart attack.

Depressing pack as four of six wrestlers passed away.

Who's ready for Wrestlemania?

I'd love to find a complete set of this product. I miss busting Action Packed products.

Intrigued by the set, but man your draw had Death's touch all over it!