Written by JediJeff at 5:30 PM
With the over 30 packs I have scanned to post, it was interesting that the ramdomizer came up with the number one. Enough to know that yup - it really does create a random number. It's possible cards from this pack were posted in the past, but the images on the post are lost. Sure, we all know the cards, but let's get them visually back on APTBNL. 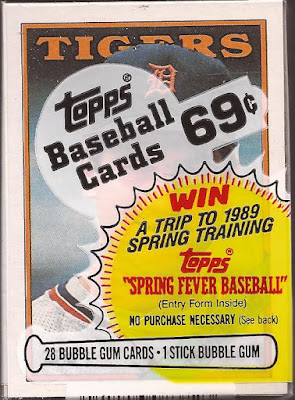 28 cards, and a stick of gum, for under 3 quarters. As the old timers say - "those were the days". As this was a cello pack, you knew the top and bottom card you were getting. I got this from a repack box, so I didn't choose a stinking Tiger. And I don't recall the bottom card, though I believe I scanned them in order, so logically it should be the card on the right of the last scan. Lots of cards, so we are going through them fast.

So the top card was that Mark Thurmond. Not sure a lot of people were clammering to grab a pack with his face on the front. Hey look - it's a Glavine rookie.

Templeton is the only decent of these three.

We hit the middle of the pack. All Star card of the Wizard of Oz and the stick of gum. The ad card offered a special 10 card set of glossy and prospects for a buck twenty five and 6 of the ad cards. SIX!

MOOOOOOOOOOOOK! And a Dodgers hot image.

Nice Turn Back the Clock of Stan the Man. And I think Witt was trying to pull off a Musial impression.

ZZZZzzzzzz. If my research is right, that is Wally Joyner and Jack Howell on the Angels Leaders card. Again.... Zzzzzzzz. 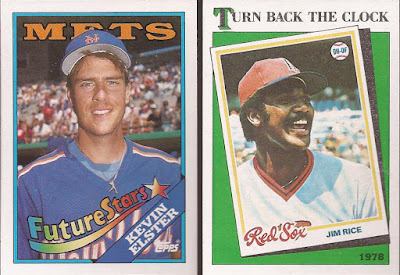 And we finish up with a Future Star of Kevin Elster and a Turn Back the Clock of Jim Rice. Elster didn't really "star" in the league but did make it 14 years, though only playing full seasons in 3 of those. 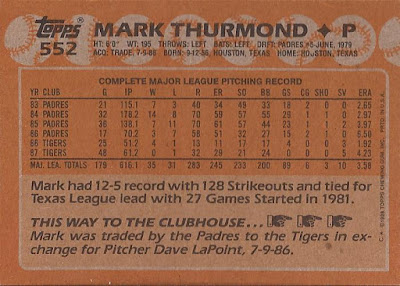 Just in case you are too lazy to pull an '88 card from your box to see the back.

Anybody that doesn't love that Jay Baller card with all the sleaziness visible is a filthy commie who hates baby Jesus and mom's apple pie.