Written by JediJeff at 5:30 PM
With each year UD puts out it's SP Authentic release. I'm a sucker for this set, though I actually never built any year. Still, it's a nice mid level set and you get decent hits in the boxes. The stars of the release are the rookie autographs - on card and clean. 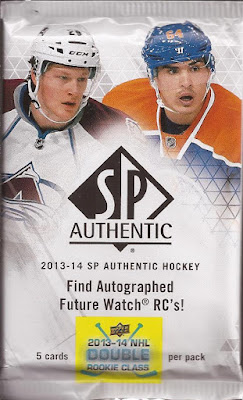 As you recall with the half season, 13-14 was double rookie class. MacKinnon and Yakupov get the poster for the product. Five cards in a pack. Here we go.... 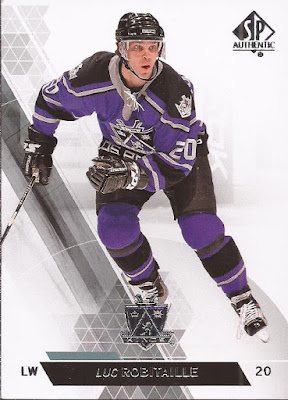 Yup - you get some retired players in SP Authentic. These were God awful Kings sweaters. With SP Authentic, you get a white background, though with this year's release they added some linear and polygonic (is that a word - it is now) images behind the player. Foil for the UD set logo, team log and player name. Boo! The card has an Olympic feel to it, or is it just me? 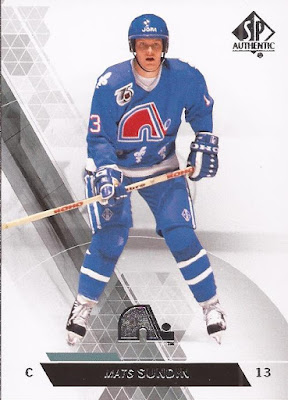 OH BABY!!!! The glorious Whalers uniforms get the due they are deserved, but people forget the glorious Nordiques and their fantastic sweaters. Let's put the Avs into a Winter Classic and have them dress up like this. Just once. Please? Mats is rocking what appears to be the Mikita bowl on his head. 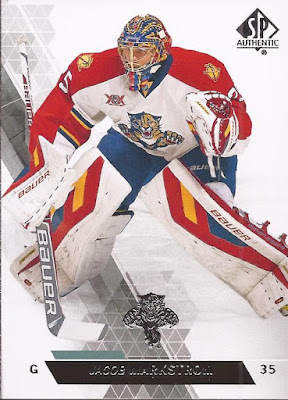 It's nice to see the Panthers having a great season so far. The Hawks won the 2010 Cup with Stan Bowman as the GM. But that team was built with the hard work of Dale Tallon, who left the organization just before the 2009-10 season to become the GM of.....the Florida Panthers. The man knows how to find talent, just like he could identify the location of a blocked shot. 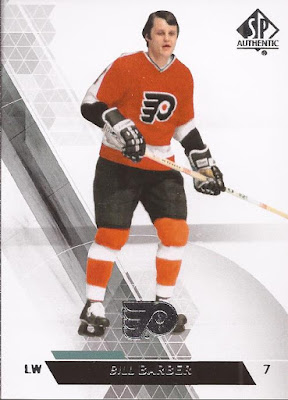 Barber - one of the stars of the feared Broadstreet Bullies of the early 70's. Barber used his stick to put the pucks into the net and not to viciously slash players like another member of the LCB line. 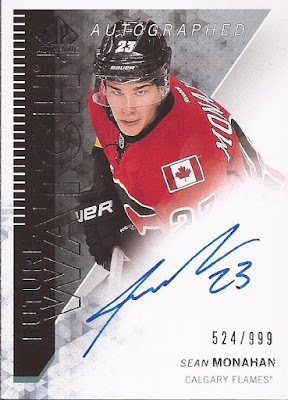 Nice! Did get one of the Rookie Watch autos from the box. Sean Monahan was the 6th overall pick a couple years ago and turning into a decent player for the Flames. I think I sold this card already. Or traded it. I know I no longer have it though.