Written by JediJeff at 5:00 PM
I ripped a box of this a couple year's back, so let's have at it again. 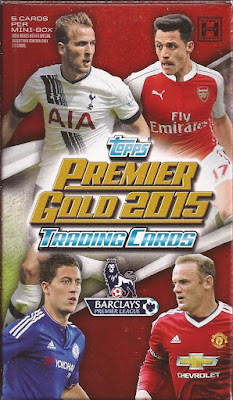 Look at this like Topps Museum. Five cards in a mini box, with a guaranteed hit or either an autograph or relic. I do think auto relics are available as well. Quite the representation on the cover, with Rooney for ManU, Sànchez for Arsenal (though, I swear that looks like Özil), Kane for the Spurs and Matić for Chelsea. 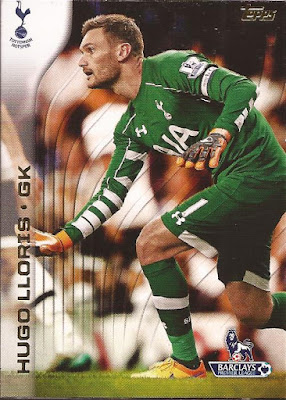 Bit of a busy card, but like Museum, who cards too much about base. Lloris is the keeper for the Spurs and also helped get France into the Euro final. 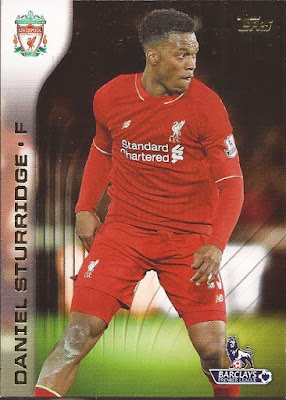 Sturridge is a steady forward for Liverpool and a member of the English National team. 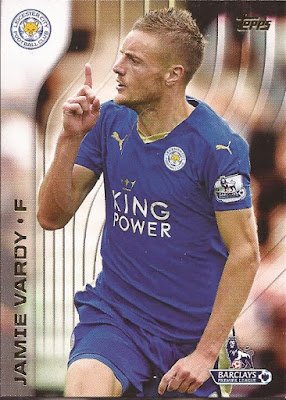 Nice pull with the almost golden boot winner for the Premier league, Leiscester's favorite Vardy. Arsenal tried to steal him away in the off season, offering a crap town of money (22 million pounds), which tripped off his release clause. But Leicester made a nice offer bad and Vardy resigned. From a guy playing basically pick up soccer (division 8 club in England) to a player making over 5 millions pounds per season. 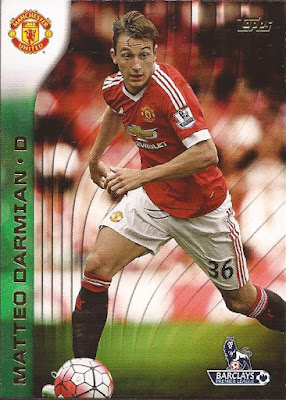 ManU defender Darmian. Note the green - this is a parallel numbered to 99. With Mourinho taking over the manager spot in Old Trafford, there is talk Darmian's days are numbered. Before I show my hit, here's the card backs. 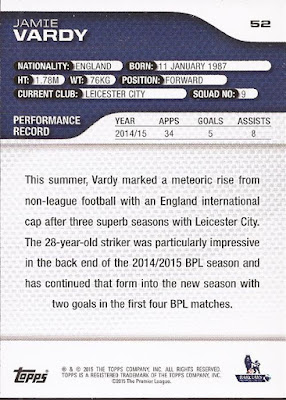 Even the back of Jamie's card mentions his rise in the English football leagues. And my hit? 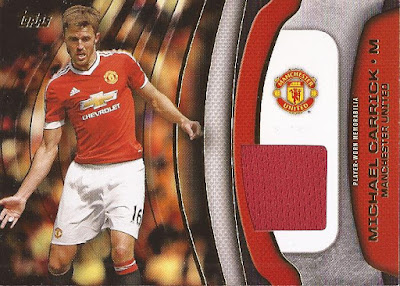 Ugh. As a Chelsea supporter, this one hurts a bit. Carrick may or may not be back this coming EPL season. There are hints he may be retiring.

I'm looking for a card- any card- from Hotspur. I'm a direct descendant from the man who the team was named after.

Nice pack with the Sturridge and Vardy cards! I wish they had a retail version of this set.