2012-13 Panini Past and Present Basketball 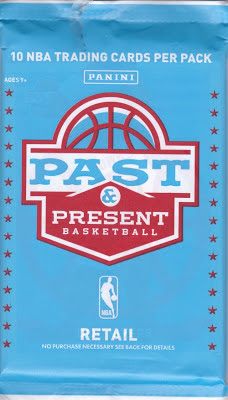 It seems like hardly a week goes by that there isn't a new Panini NBA release on the shelves. This latest endeavor is an attempt at a Heritage style set that makes use of both current players and players of the past, which is surely something no other NBA set has ever attempted. The cards are given a faux-retro design and a cardstock that reminds me of something you would have seen in a product 5 to 10 years ago, which is actually a good thing in this case. 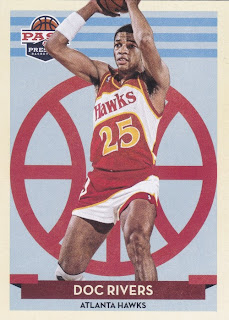 101 - Doc Rivers - Rivers is currently the Boston Celtics head coach, but is shown here in his playing days with the Hawks. 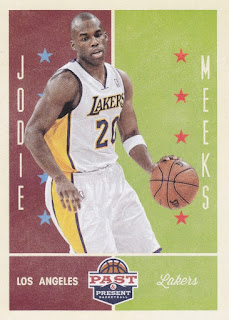 62 - Jodie Meeks - This set employs a few different card designs, and while I like the design on Doc's card a bit, this one doesn't quite work for me. It's not helped by having a lousy Laker on it. 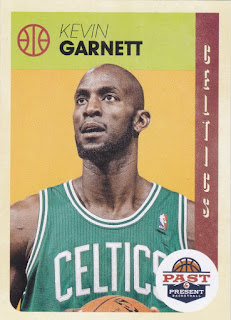 18 - Kevin Garnett - Garnett has been around so long that I clearly remember Craig Kilborn fawning all over him. I think this design is a little better than the previous card, but not quite as good as the Doc Rivers card. 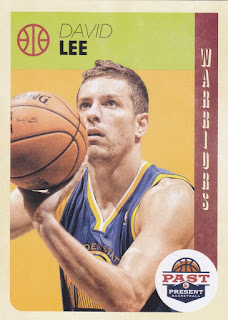 23 - David Lee - The Warriors were this season's Cinderella/darling team type, but that usually fails to work out well in the end. The Spurs/Heat Finals matchup that virtually nobody wanted is looming. 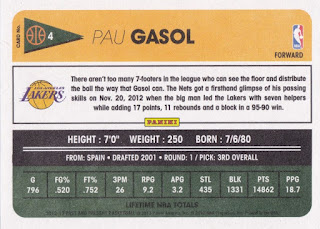 4 - Pau Gasol - The backs of the cards all have the same simple design, eschewing the typical Panini design for something with a little more brevity. 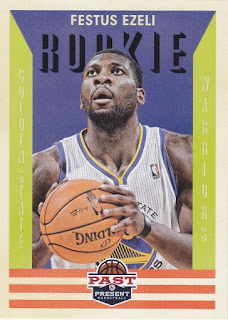 156 - Festus Ezeli - I thought about making a Festivus crack here, but I won't. Ezeli started a bunch of games for Golden State but barely played any minutes, something that seems to be a strange phenomenon reserved for centers that have limited offensive skills. I'm not sure if all rookies use this same design. 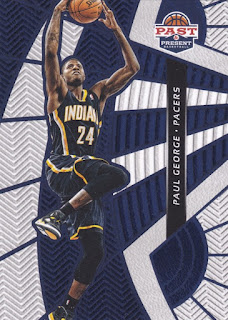 7 - Paul George Treads - George has been one of the breakout starts of this NBA season. This insert is a really nice work of art, using thinner cardstock with some fancy glossing that accentuates the "treads" on the design pattern. 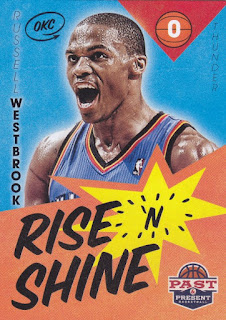 70 - Russell Westbrook Rise 'n Shine - This is another insert, but it's a very large insert set at 100 cards if I'm not mistaken. It's also quite cartoonish. The Thunder certainly missed Westbrook when he went down in the playoffs, but they sealed their fate before the season even started by trading away James Harden. Just sayin'! 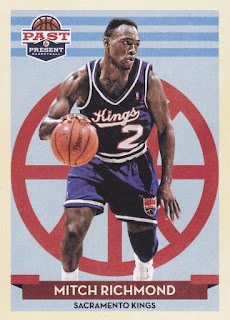 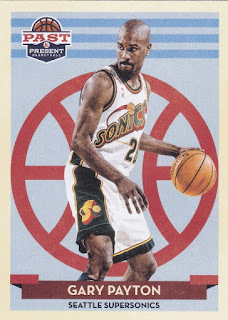 Email ThisBlogThis!Share to TwitterShare to FacebookShare to Pinterest
Labels: 2012-13 Panini Past and Present Basketball

So you didn't get any Trailblazers either, huh?