Written by --David at 6:00 AM
As part of the pack-a-day season break I'm doing, several readers have donated packs to the cause. Workman41 bought several packs and them delivered to me. The 1982 Fleer Baseball was one of those.

I did not scan the wrapper, but I scanned all the cards that came from the pack. These really took me back to my childhood. Before we get into that, though, let's look at some of the cards. Each pack had 1 sticker and 15 cards.

The sticker (in this case, a Yankees team logo) was on the top of the pack. The cards themselves feature a rounded corner border in the featured player's team colors. The player name, team, and position appear in a solid-fill oval centered at the bottom front of the card. No where on the front does the manufacturer appear. 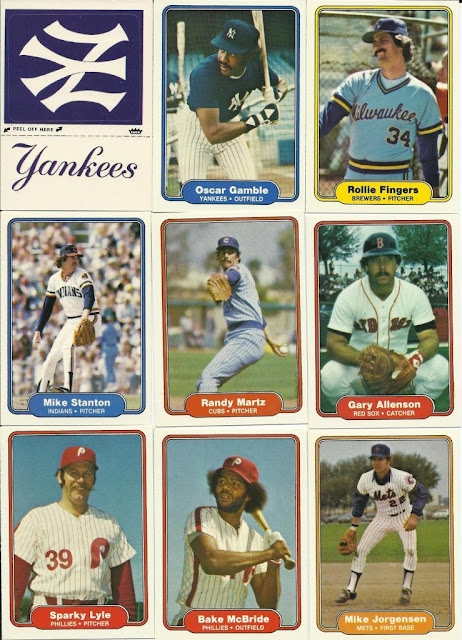 As you can see, we pulled some cool players of the day! The photography was pretty bad by today's standards. I would venture to say they were bad by 80's standards as well. Haha! That doesn't mater, though, because the uniforms and hair styles ensure there is no mistaking the era in which these were taken! 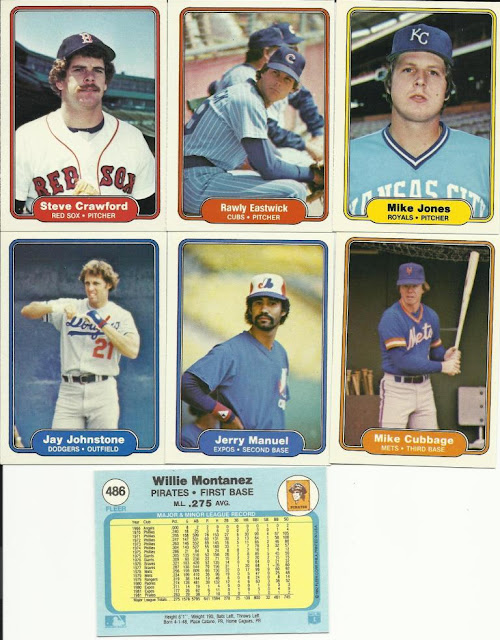 I think what sticks out the most to me is not the quality so much as the distance of the photo. Very few close-ups and even those still appear a bit further than we see today. Though the Mike Jones card is pretty close, comparatively. I also show you an example of a card back. The back features a light blue border (on all cards) with card Number, player name and bio, team logo, and stats for the player's career (essentially, though not always).  Fleer was notorious for having errors on their cards - from duplicate card numbers to incorrect stats to misspelled names. I have not checked to see if any of these are of an error variety.

When I was a kid, my friends and I would go to the local "Dairy" store and buy cards. After we picked out the ones we were keeping, we'd start flipping the ones we didn't want.  We didn't do the sideways toss. We held the cards by the long edge, raised our hand to at least forehead level, then thrust downward releasing the card so that it would flip end over end to the ground. We tried to "aim" the toss as to land on the cards already thrown, but this rarely worked. The rule was that face-down cards were fair game. If your card landed on another card face-up, you go all the cards your card touched. If your card landed face-down, it stayed there.  Any cards left on the ground after everyone had tossed their cards were returned to their original owners and/or traded.  We flipped a LOT of '82 Fleer.

I think the photography is much better than most of todays cards who are almost always extremely dull.

The pack of '82 Fleer I bought on eBay a few months ago didn't have a sticker inside. Hmmm...