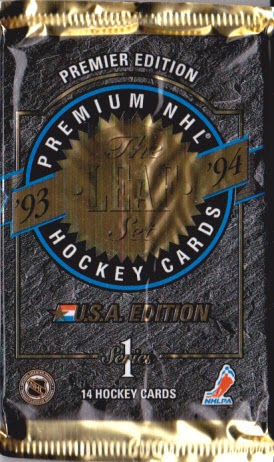 Leaf first venture in to hockey with 14 cards a pack. Mario Lemieux on the cover of their set. Series 1 consist of 220 cards and inserts 1-5. Their insert sets feature Lemieux, All-Stars, rookies, goalies, and hat tricks split in two series. At the time they offer Lemieux poster after sending 10 wrappers to them. 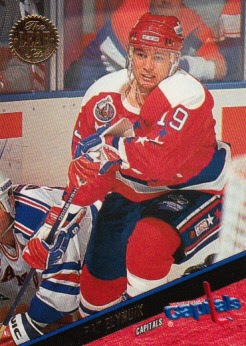 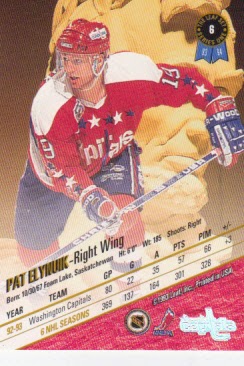 6 - Pat Elyniuk - I like how on back of the card they put city landmark as background behind the player. It brings out "They represent this city" outlook. Back of Elyniuk card has statue of Abraham Lincoln from Lincoln Memorial in DC. Strange seeing Elyniuk in different jersey other than Winnipeg Jets. Another note one of my favorite cards was his 92-93 Topps Stadium card. 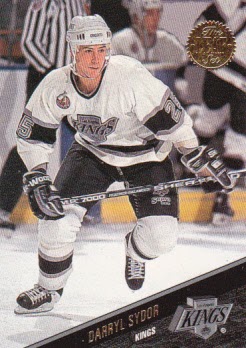 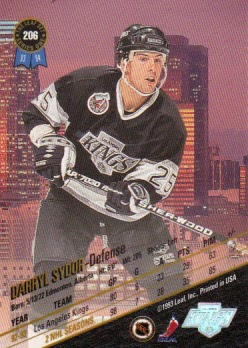 206 - Darryl Sydor - LA skyline in the background. He spent 15 years in the NHL. Currently assistant coach of Minnesota Wild 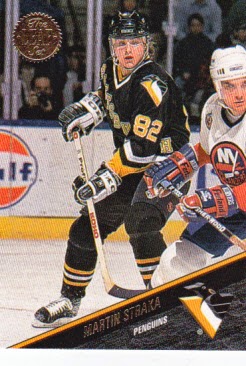 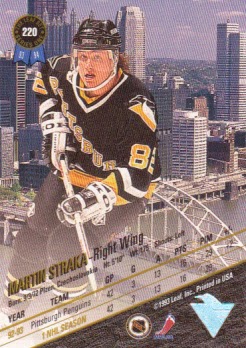 220 - Martin Straka - I remember that skyline of downtown Pittsburgh. Having been there few times I know it was taken on top of Mount Washington Incline. Straka last played in NHL in 2007-08 before spending his remaining six years of his career in Czech league. 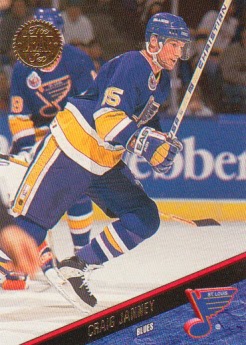 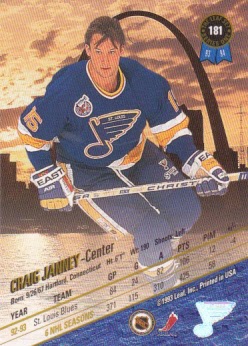 181 - Craig Janney - St. Louis Arch in the background. This his first full season with Blues the fans sang the blues over Janney/Adam Oates trade which Bruins got the best deal. 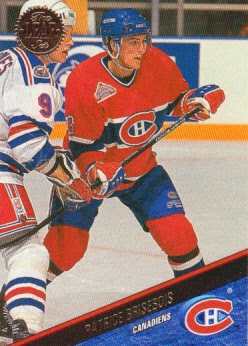 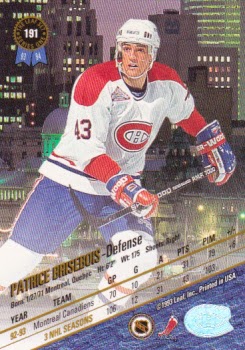 191 - Patrice Brisbois - defending Adam Graves at the Rangers zone. Montreal skyline on back of his card. 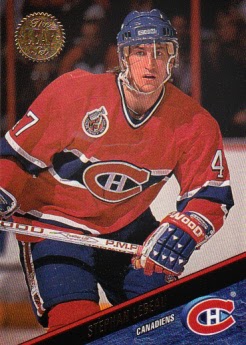 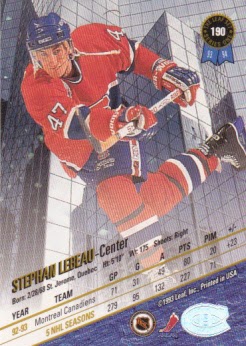 190 - Stephan Lebeau - different Montreal skyline shot on back of Lebeau. I like they put him firing a shot as he was trying break one of glass windows. 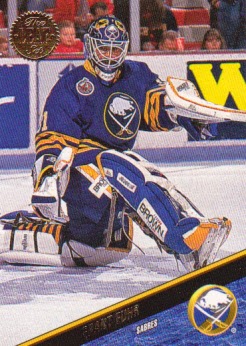 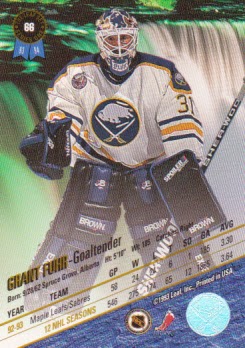 68 - Grant Fuhr -Hall of Fame career with multiple All-Stars and Stanley Cup wins. During this time he split time between Toronto and Buffalo. Back of his card featured lovely Niagra Falls. 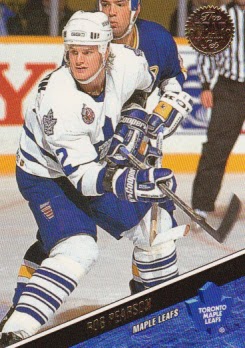 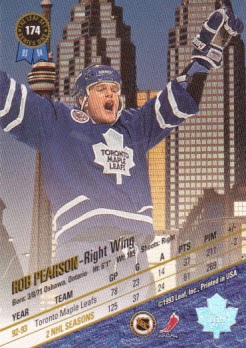 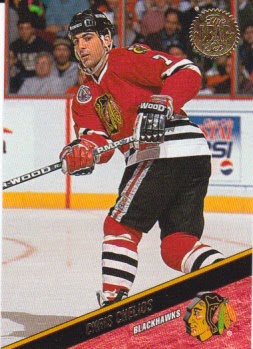 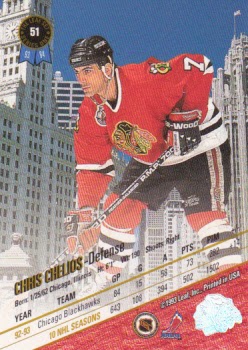 51 - Chris Chelios - one of greatest American players to play in the league. Hall of Famer played 27 years in the league. By time he called it quits he was 48. Recently put out his autobiography. He's in faceoff zone behind downtown Chicago skyline. 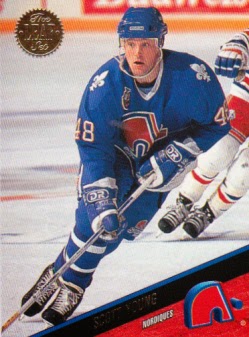 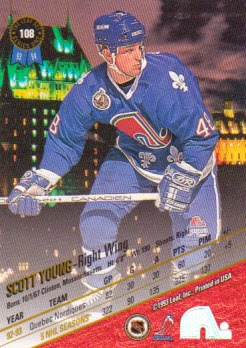 108 - Scott Young - looks to be skating down the ice with a puck. Quebec City skyline on back of his card. 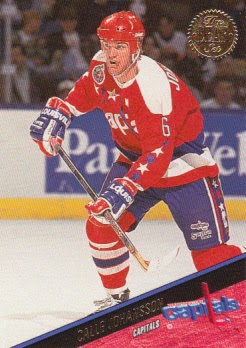 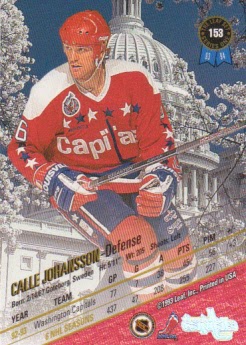 153 - Calle Johansson - Another Capitals card, but with different background. Capital building featured on back of his card. 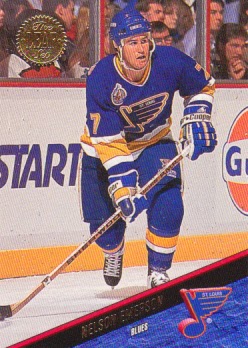 75 - Nelson Emerson - background on back of card same of Craig Janney. He's looking to pass the puck. 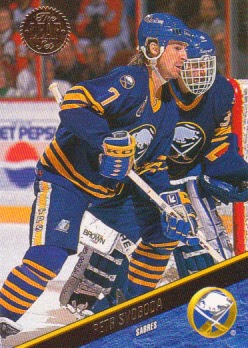 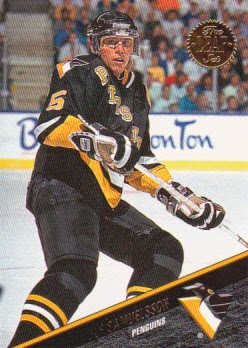 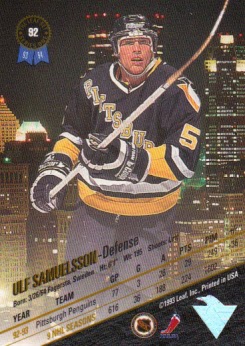 Leaf fires a shot and into the goal for this design.

Classic. This is also one of my favorite baseball designs too.

Nice pack. Chelios is in front of the Wrigley Building and Tribune Tower on North Michigan Avenue by the Chicago River.

Baseball version is one of the greatest looking sets ever. Nice to see the hockey was on-point too. Great post.