Written by JediJeff at 5:30 PM
Random.org selected yet another hockey pack from my scan folder. I would guess at least 40% of the scanned folders are from that sport, so not a huge surprise. And I have 4 more hockey packs I just grabbed in a repack that are missing from APTBNL, so more will be added to the queue.

Enough about what's on deck. Today, we are talking goalies. The Between The Pipes release from In The Game focuses on the net minders on the ice. 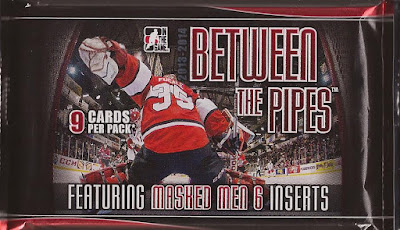 9 cards in the pack. There are a few insert sets, but Masked Men is the most popular from previous releases. Relics and autographs are possible pulls from the packs. 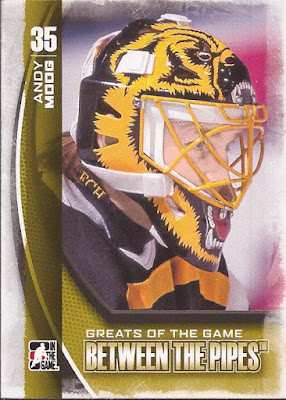 ITG products have no license, so when you get a release focusing on a player from the NHL, you get a close up portrait. However, considering the intention of the set, this is a good thing. Pretty generic card layout. No foil, which is a lovely thing. Clear, easy to read player name and jersey number. 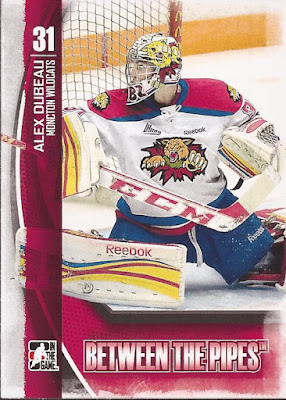 ITG's license is with the CHL, so you get full views of the logos and team names with the clubs. The set is just 150 cards. It's broken out with 23 at the front of NHL stars called "Stars Of The Game", the middle 57 being of the goaltenders from the CHL teams, and the last 70 of retired NHL goalies. 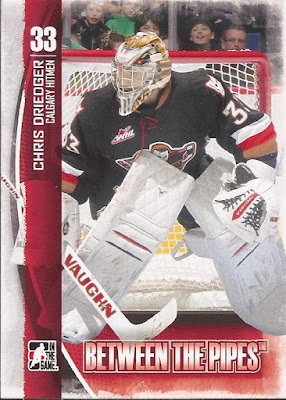 Not a lot of household names in the base section of the set. 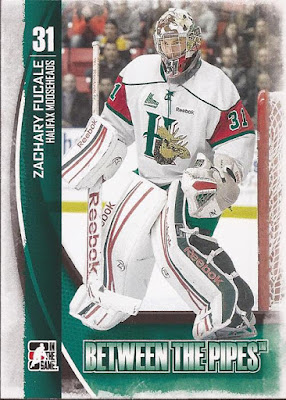 If there was someone that had a collection of goalie masks, this is the set for them. 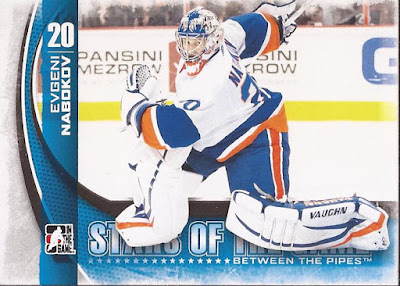 You can see the slight difference between the Stars Of The Game section of NHL 'tenders to the Great Of The Game with the first Moog card. And that is some primo image selection to avoid the NHL license. 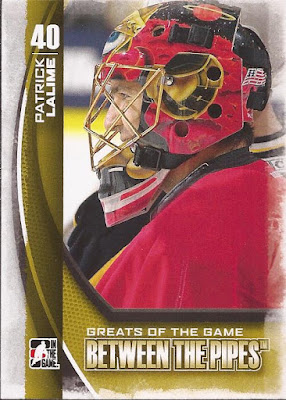 I do believe the front of Lalime's mask here had Marvin the Martian on it. Yet another license to avoid by ITG. 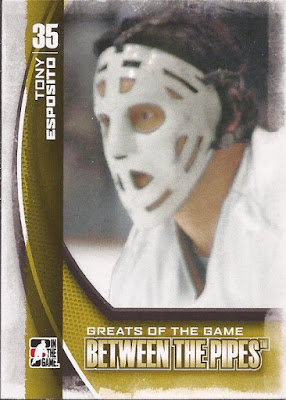 YES!!!! The Great Tony O for my personal collection. There is probably a small amount of photoshop to take off a few identifying logos, like the crossed tomahawks that appear on the Hawks shoulders. 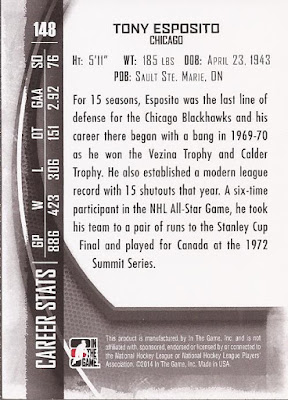 Very plain backs. Full career stats, though they do mention the full team name the player was a member of, as well as other NHL names. Surprised they did not get dinged for that. 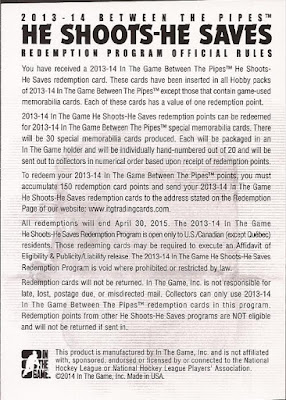 Yes, one of the 9 cards I got was an ad. You can collect them and redeem for special memorabilia cards. The front is a puzzle piece... 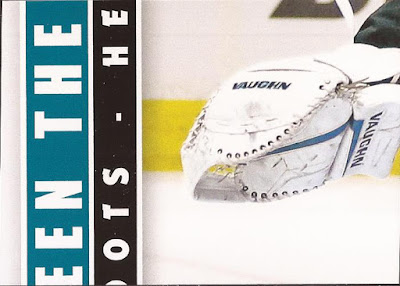 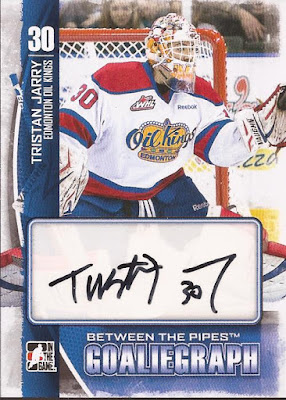 Well how about that? Sticker auto, but the ITG design frames it well. Tristan Jarry was drafted by the Pens in 2012. After winning some acclaim fronting the net with the Oil Kings, he was promoted to the Penguins' minor league club in Wilkes-Barre/Scranton for the 2015-16 campaign.

Email ThisBlogThis!Share to TwitterShare to FacebookShare to Pinterest
Labels: 2013-14 In The Game Between The Pipes

Yes, I definitely did buy a box of this. It was easily my most missed product of 14-15. Driedger was called up by Ottawa when both Lehner and Anderson went down, but got stuck behind the Hamburglar's insane run.

Tristan Jarry rocks a Tom and Jerry theme with his mask, and it is more visible on his Masked Men card.

Jarry has auto's in this? On to eBay I guess lol