Written by JediJeff at 3:03 PM
I am on a mission - scan folder clear out. So you will be seeing me every other day for a while. I WILL GET THIS SUCKER CLEANED!

Hello, it's me again. And for today's post, we get more hockey. I actually have a LOT of hockey in the folder, plus a few packs of hockey to get scanned out. At least it's the season, so the posts tie into the time of the year. Today, let's view a pack that came from a discounted blaster - 2012-13 Upper Deck hockey series 1. 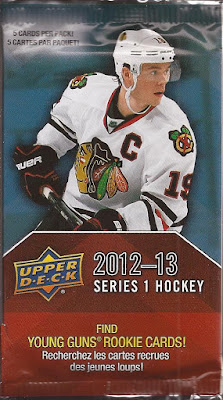 Found this blaster at WalMart a while back for $8 I think. No brainer purchase. This is a set I missed out on and I would like to go back and collect. Even though the Kings secured the Cup the 2011-12 season, Toews got the cover shot. As much as he is my boy, I really think the manufacturers should look towards the champions of the previous season and make someone from that team the star of the wrapper. Anyway, 5 cards per pack (blaster, remember?), and while hits are possible, you are also looking for rookie cards from the popular Young Guns insert. 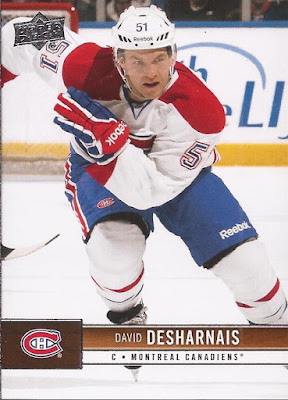 Again, this is a set I missed, and I really like the design. The only foil is the UD logo and some ot eh lines in the badge at the bottom. Otherwise, very simple and clean style. The name is easy to read, as is the position and team name/logo. As always, Upper Deck knocks it out of the park (rink?) with the image selections. 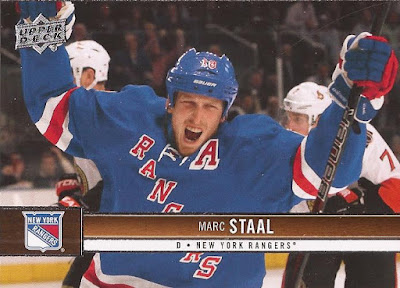 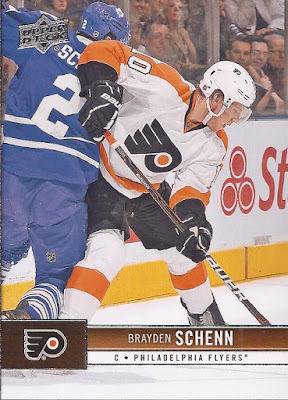 This is why the single company license is a bad idea. We, as consumers, will put the pressure on the manufacturers simply by avoiding what we don't like. Throw 100 sets at us and we'll let the makers know what works by where our money goes. 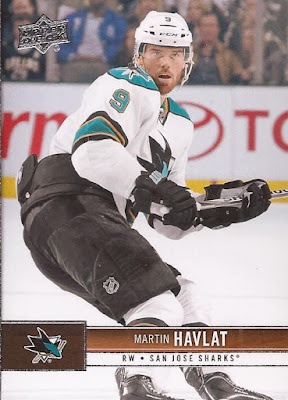 The well traveled Havlat, the Rickey Henderson of the NHL. Currently, he is trying to make the roster in Florida. 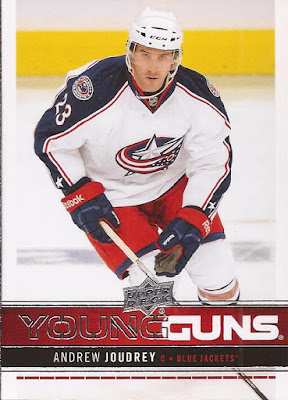 Here is one of the Young Guns inserts. Not very young gunnish as Joudrey played a single game in the NHL with Columbus, and is currently taking the ice in the German hockey league.