Written by Jafronius at 5:24 PM
Greetings...

Hope everyone is enjoying their weekend.  If the Blogger Scheduler does it's job, this auto-post is being published on the exact minute of my birth 40 years ago.  Yes kiddies, ol' Jafronius turns 40 today.  Not sure what I'll be doing, but I wasn't going to worry about putting a post together.

In the baseball world, there's lots of folks born on this day.  Terry Pendleton played for 5 teams.  Lee Elia's the mouth behind a legendary rant (NSFW, duh).  Shoeless Joe Jackson may or may not have been involved with the Black Sox Scandal.  Night Owl has a blog.

It's a good thing I don't have a quest to collect cards from all ballplayers born on this day...out of 39 players born on July 16th, only 11 played in the last 40 years.  That means a lot of vintage, which means, uh, no.

When you hit those numerical milestones, one tends to think about their mortality.  Unless you're a Time Lord, I assume.  It's a pack of Doctor Who Timeless! 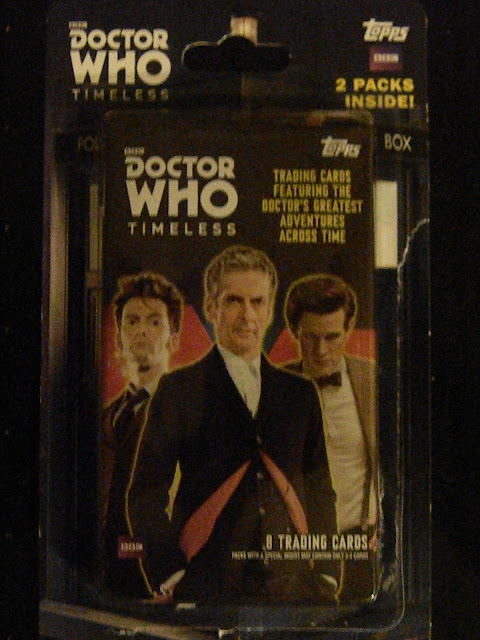 I was wandering through my local Toys R Us last week and saw these just hanging there.  I never expected to see retail packs of this stuff (I didn't see last year's debut set anywhere but in online box breaks), so I forked up the 5 bucks for these 2 packs - both packs come sealed in this TARDIS-looking card back.  Here's the back of the card to show you the odds of pulling cool stuff: 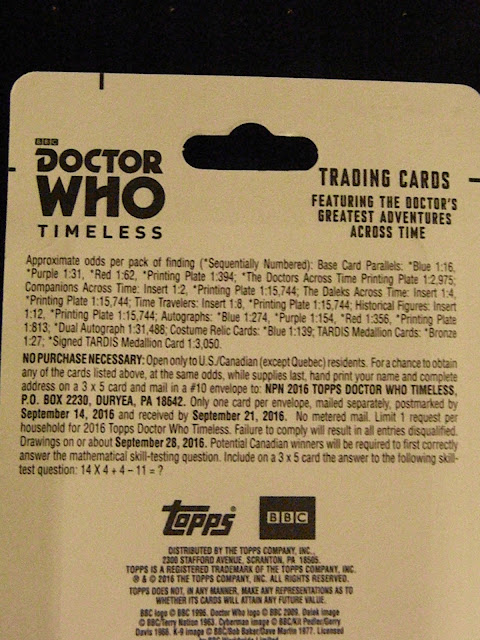 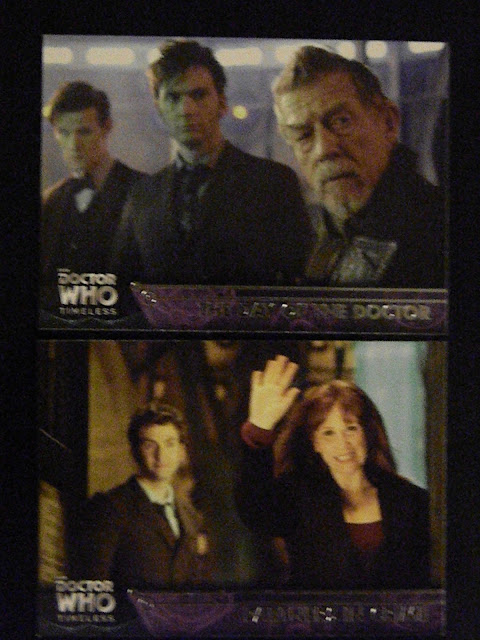 First off, you may be wondering about the quality of the images in this post.  I apologize in advance, I took pictures of the cards instead of scanning them in.  Some turned out better than others. 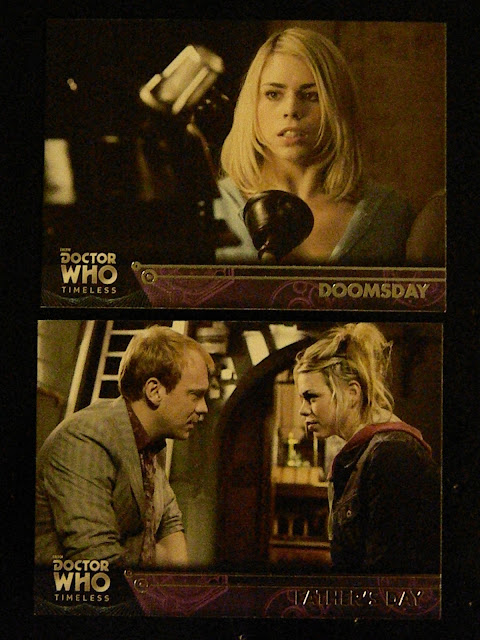 Here's a link to the checklist for those who are interested.  It's a 100-card base set, with all cards from various episodes over the show's 50 years, in air-date order. 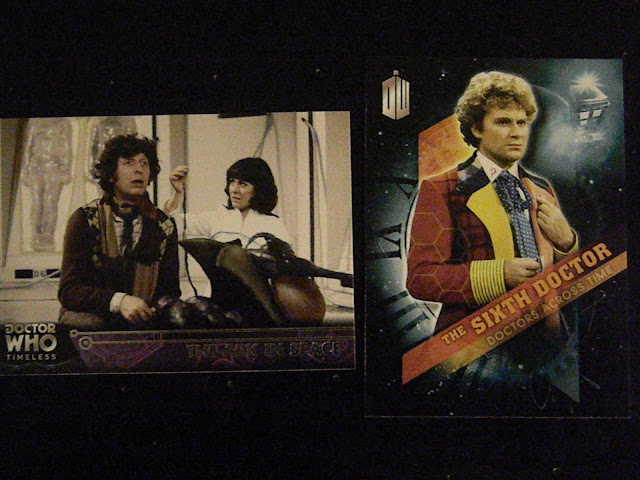 The pack does not give odds on the Doctors Across Time insert set. 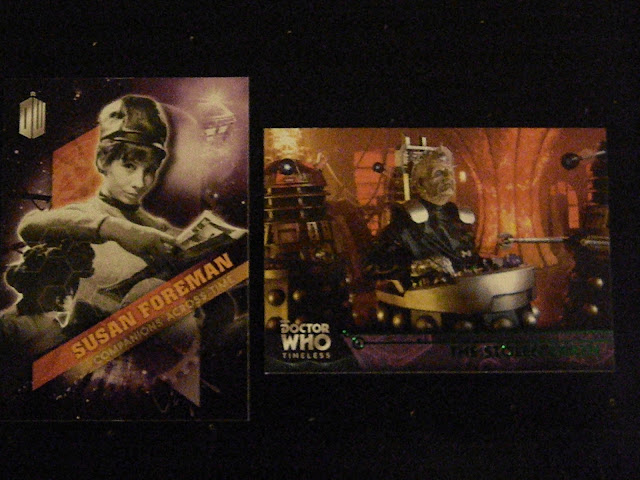 The pack says the Companions Across Time insert comes 1 in every 2 packs.  The Green Parallel comes in every pack, from what I learned from the interwebs. 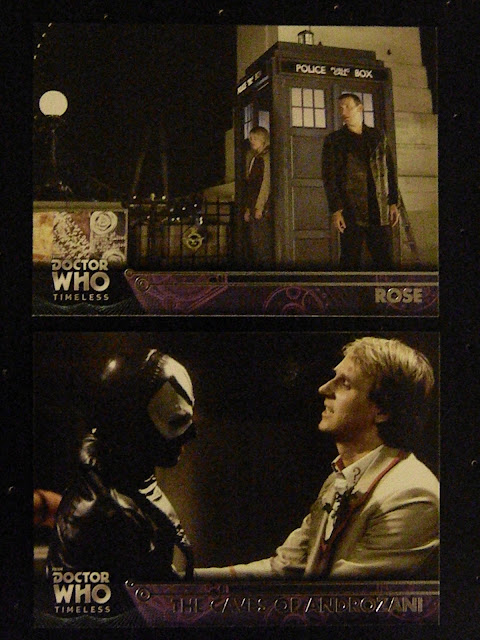 The episode title is in silver foil, making it just barely readable even when looking right at the card. 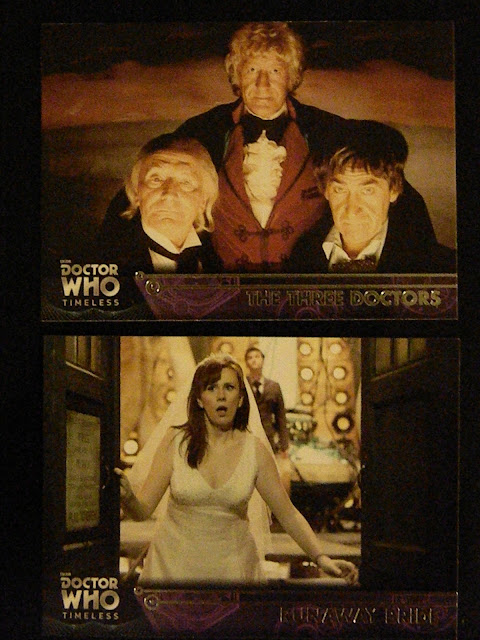 I don't think the image they used for The Three Doctors came from the episode itself.  I think it's a promo shot they did back then.  That's too bad.

Topps did a poor job with proofreading some of the episode titles.  It's a minor nitpick, but the actual title is "The Runaway Bride."  The back of The Stolen Earth refers to "A Christmas Invasion" instead of the real title "The Christmas Invasion." 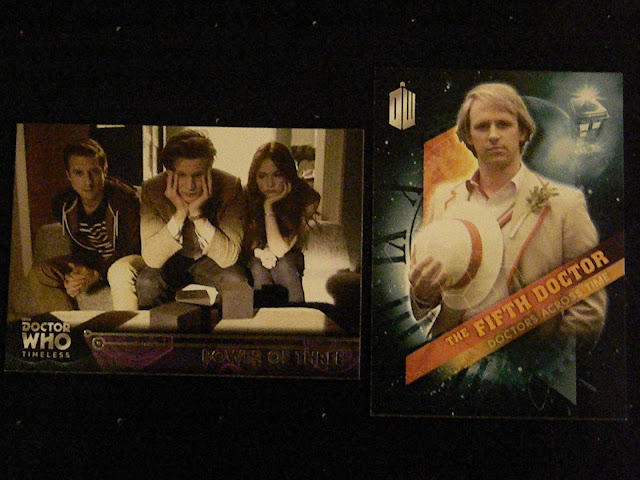 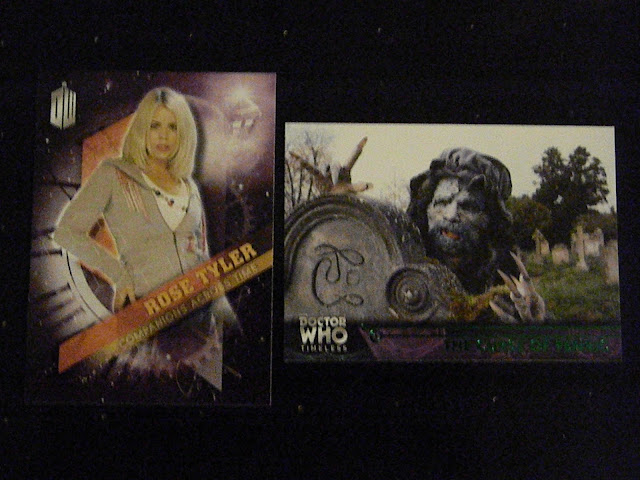 And of course here's some backs: 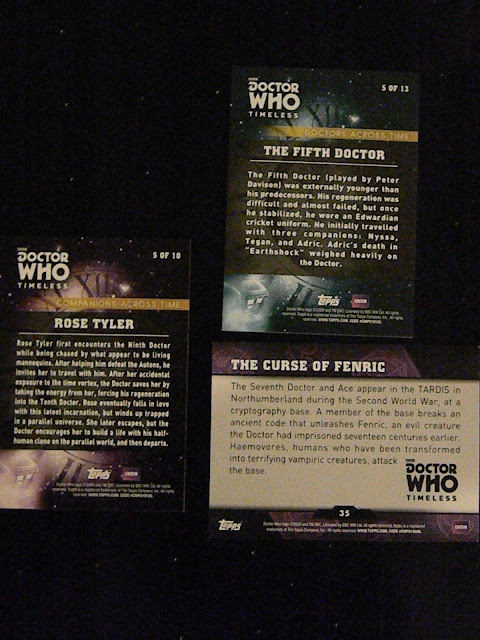 Just a simple episode summary with no extra scenes from the episode itself.

Anyway, those were the packs.  Don't think the $5 price tag is worth it, but hey, birthday!  Enjoy the rest of the weekend, and thanks for reading!

Damn - no K9 appearance with Doctor #4 and Sarah? BOOOOOO Topps!

Might need to buy a master set of this product on eBay if the price is right. I haven't watched it recently... but a few years ago, I couldn't get enough of the Doctor