I don't know if there are non-fate pack versions of Opening Day, but at my local Walmart, it was either this or a multipack box. Truth be told, for the price, it probably would have been better to get the 8-pack box. Ah well, I chose this one.

I don't know what the general consensus is on the like/dislike of the 2017 Topps card designs. I'm a bit torn, personally. I think the design has cool potential, but the weird 3d design of the card's elements make it look like a stretched Photoshop job versus the cool effect Topps was probably hoping for. They're not "bad" to me, just not... eye-popping, I guess.  FWIW, I do like the borderless graphics. 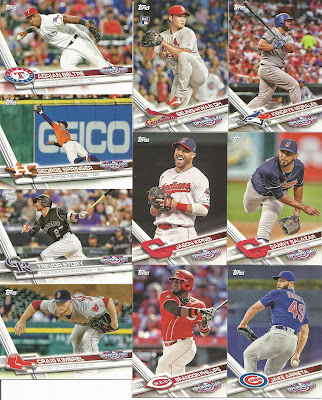 The cards themselves feature a full-length (or width) image, the Topps logo in an upper corner, the position, team logo, player name, team, and OD insignia. Everything but the main image and the Topps logo are skewed to appear as though they are a 3d "plate" (for lack of a better word) that has been laid on top of the image. 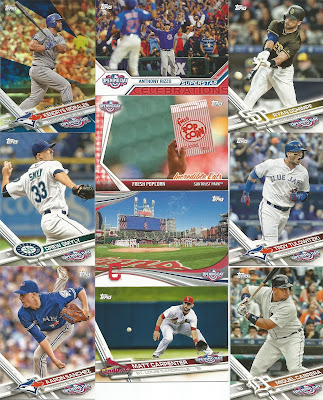 This pack has three inserts. Mine include Incredible Eats "Popcorn," ODB (Opening Day Ballparks?) Progressive Field, and Superstar Celebrations. My pack also included a foil version of the Kendrys Morales card with "April 3, 2017" stamped on it. 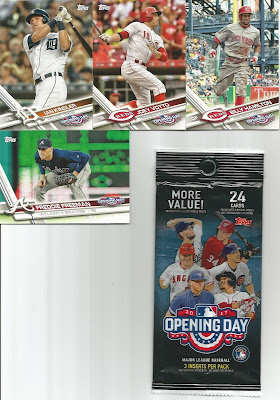 The backs of the cards are colored in the team's primary color (or so it seems to me) with various 3d-looking bits (player name, team, card number, position) at the top. The card features bio info, the #toppsbaseball hashtag (welcome to the modern era), a short tidbit about the player, and a box full of stats. The inserts have information related to the insert image depicted on the front. 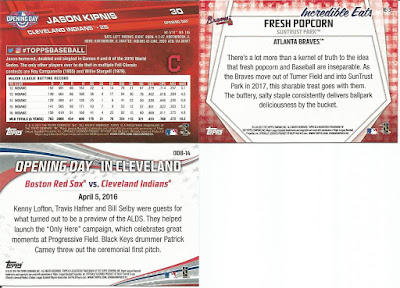 I have to say, the images on the front are very high quality (at least in my eyes). They are crisp and clean pictures of the player with a nice blurred background. With Opening Day just around the corner, it seems fitting to be busting open a pack of these to get those first day butterflies flitting.