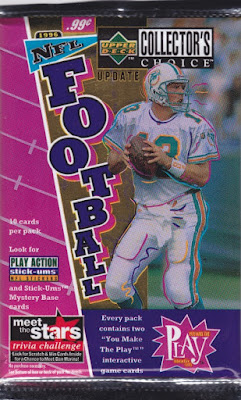 March Madness may be in full effect, but I scanned this pack of football cards awhile back, so football is what you get. Football! Tough guys! Yeah! 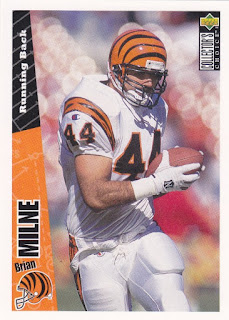 U156 - Brian Milne - Boomer Esiason and Anthony Muñoz are some Bengals that I know. This guy isn't one of them. 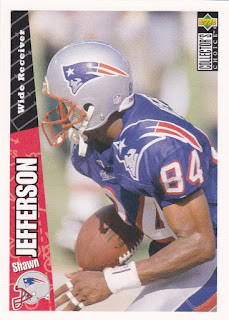 U168 - Shawn Jefferson - This is back before they were the Hated Patriots and just the Unfortunate Patriots. They would make it to the Super Bowl for the second time this season, coming up short again. 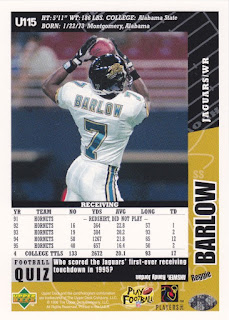 U115 - Reggie Barlow - Here's a look at the backs of these cards. No one really remembers this, but Jacksonville made it to the playoffs a bunch of times in the '90s after making their debut in 1995. Now they are one of pro sports' worst franchises. 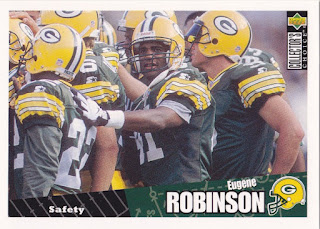 U140 - Eugene Robinson - Longtime Seahawk safety joined the Packers in their championship year. 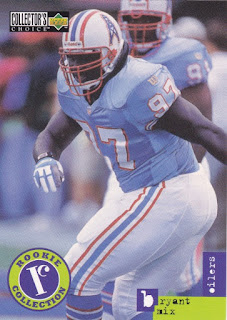 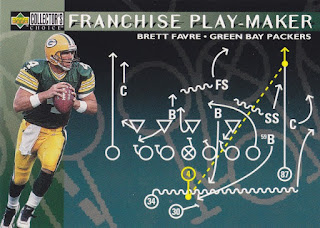 U72 - Brett Favre Franchise Play-Maker - Anyone know what play this is? Or how to run it? 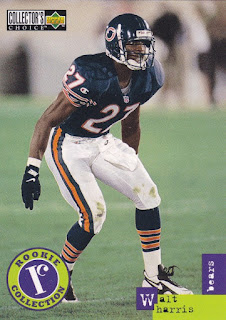 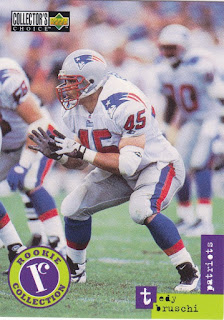 U43 - Tedy Bruschi Rookie Collection - Bruschi would figure prominently into the Patriots future run of Super Bowl titles, but he was just a rookie here. 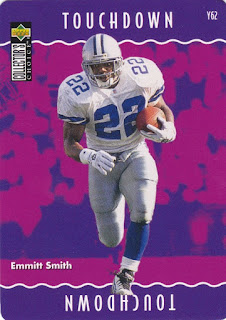 Y49 - Emmitt Smith You Make The Play - As mentioned on the wrapper, each pack contains two of these game cards. 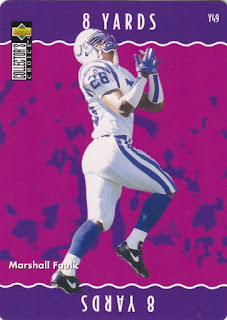 Y49 - Marshall Faulk You Make The Play - I believe there's something like this in one of the MLB Collector's Choice sets as well, but I don't remember them being so... bright.

Are those two Pats available for trade?

Brian Milne's name rang a bell immediately. I thought I knew why so I GTS and was right. He had cancer and I remember that it was a story.

Per wikipedia: "Milne enjoyed a fine career at Penn State University, where Head Coach Joe Paterno held a scholarship for Milne as he recovered from cancer treatments as a teenager. Milne's most outstanding game as a member of the Nittany Lions came in early November 1994 at Illinois, where he scored three touchdowns (including the game-winner) in Penn State's largest comeback victory under Paterno. Penn State went on to beat Oregon in the Rose Bowl to become the first Big Ten team to earn a 12-0 record, finishing second in the polls.

While at Penn State, Milne was also a member of the track & field team. He was a national class discus thrower. Milne threw the 2k discus over 63m/207' for an American Junior Record."

I was very sad about that particular Rose Bowl.

I'm setting the Pats cards aside.