Written by Fuji at 5:04 PM
Basketball is like chocolate ice cream.  I liked it as a kid, but there are so many other options out there, I'd be okay if never watched (or ate) it again.  Sure.  I'll complete my annual March Madness tournament bracket and check ESPN to see how my picks fared.  But that's about the extent of my basketball fandom these days.

However basketball cards are a completely different story.  Although I don't pursue them as much as I did six or seven years ago, I'll still add a card or two whenever the opportunity for me to add some cool cards to my collection arises.

Back in March, SumoMenkoMan generously donated a bunch of packs to my unopened Japanese wax pack collection.  Here's one of the packs he sent: 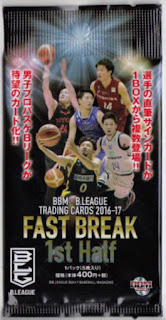 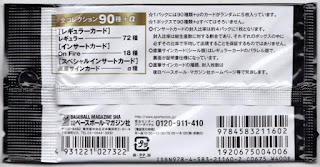 What you're looking at is a pack of 2016-17 BBM Fast Break (1st Half) trading cards, which features basketball players from Japan's professional basketball league: B League.  I honestly don't know much about the league, teams, or rules... except for the fact that Yuta Tabuse (the first Japanese national to play in an official NBA game) plays in the League and has a card in the set.


Let's see if I was lucky enough to pull him:

Garrett played two seasons in the NBA and was a D-League all-star a few years ago.

Shimura led the Sendai 89ers in steals and played in all 62 games for them this past season.

Dozier was the last player drafted in the 2009 NBA Draft, but it doesn't look like he played in any regular season games for them.  He was the second leading scorer this past season for San-En NeoPhoenix.

Okada is a shooting guard for Toyama Grouses who averaged 7.5 points per game.

Kawamura was the Yokohama B-Corsairs' assists leader this past season.  In 2009, he attempted to play in the NBA Summer League, but I wasn't able to find any stats for him.

Unfortunately, I didn't pull a Yuta.  However I was able to learn about five other guys playing in Japan's B-League.

The overall card design is solid... especially the card backs... although it seems like they're missing player statistics.  What about you?  Do you collect basketball cards?  Would you purchase packs of this product?

Like I mentioned earlier, I'm not into basketball anymore.  But I was very excited to rip into this pack and add these cards to my Japanese trading cards binder.  Thanks Ryan!

Thanks for posting this! I love the packs and design. I think the players statistics are missing because this is the first year of the B.League. I'm not sure they count the other leagues as part of their B.League stats, but I may be mistaken.

I can't believe I forgot to post this. Duh! I have a spare Yuta Tabuse base card if you want it Fuji.

SumoMenkoMan - Thanks for hooking me up with the packs! I tried to figure out the show B League thing and it was kind of confusing. Three divisions with a ton of different teams? Lol... I was kinda lost. But the lack of stats thing totally makes sense if this is their first season.

Billy Kingsley - Honestly... you should reach out to SumoMenkoMan. He's the true Yuta Tabuse Super Collector :)

He helped me get boxes of both series 😀