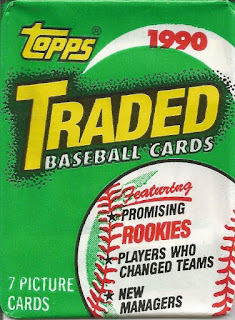 Here, we have a pack of 1990 Topps Baseball Traded. The pack is actually the paper/wax kind! And, that green wrapper is very bright, just begging to be bought! How could I resist?

The cards themselves are pure 90 Topps: The colored borders, the pseudo-gradient fills, the very inconsistent player images... I mean, compare the Noboa picture with the Reardon. Heck, compare ANY of the others to that Reardon. My main gripe is not with any of that, though. I wish the Traded versions actually said which teams they came from and when (you know, like they did in various other Traded sets/subsets). For the sake of the public, I went and did a little research.

Olson was traded from the Twins to the Braves. Noboa hadn't been traded from the Expos to anyone. In 1990, he was still an Expos player. Why is he in the Traded set? No idea. 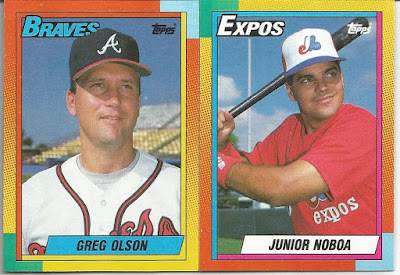 Hamilton was a Brewer before and then became a... Brewer in 1990. What? Harkey? Same deal, but with the Cubs. John Russell moved from the Braves to the Rangers. Whew! An actual traded player. I was starting to get worried there.

Don Slaught came to the Pirates from the Yankees. Jeff Reardon had been a Twins player and was moved to Boston. I guess the Twins were getting rid of several players in 89-90. We pulled two trades coming from Minnesota. 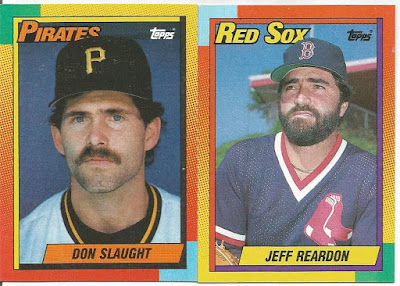 No idea why players who didn't actually move anywhere are featured in this set, but there ya go!

We'll, as it says on the pack, Topps Traded always included rookies, so I assume guys like Noboa fit in there. Some of those Traded sets ha every valuable rookie cards.

Hmm, maybe. But, the back of the card shows him already having played for them previously. Maybe it wasn't enough games to constitute actually "playing" if that makes sense.

Lot of orange and red in those borders. The 1990 Topps baseball design is my favorite ever for the sport. I'm actually collecting them just because of the design, I'm not a baseball guy.