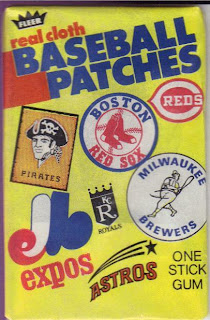 I was poking around eBay, looking for unopened boxes and wax packs and came across this little dandy - a 1974 Fleer Real Cloth Baseball Patches pack!  I'm not even sure in 1974 that I was collecting these.  Of course, I was all of about five at the time, so that might have something to do with it, too. 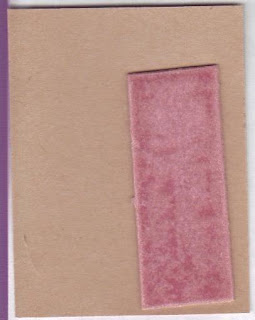 The pack comes with "one stick gum," and let me tell ya, it sure does!  That gum is STUCK to the insert that separates the patches.  I tried to peel off the gum, but it would have none of that.  I'm sure I heard, "I've been here since before the Bicentennial, and I am not about to let go now, Sonny!" 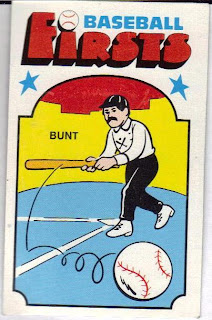 In addition to the patches (2 per pack, evidently), there was a card from the "Baseball Firsts" series.  I got bunting (3 of 42). On the back, it tells how balls that landed fair first then rolled foul before reaching the base were still considered fair in the 1870s.  Dickey Pearce became quite adept at bunting the ball to take advantage of the rule.  Naturally, the league changed the fair-foul rule since it gave the batters a distinct advantage. We can't have anyone with an advantage now, can we? 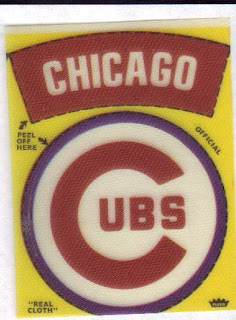 The Cubbies are the first patch out of the pack.  It is a VERY frail thing.  I don't know if that is because of age or how they were made, but I felt like I should have been wearing little white gloves.  The color is remarkable bright on this one!  In true 70's fashion, the centering is off, so the patch is actually cut off at the bottom. 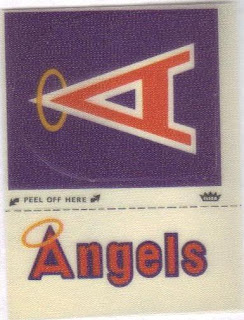 The Angels aren't so bright, but that's my fault.  Apparently, I had the thing upside down on the scanner so what you really see is the BACK of the patch.  I have no idea if one was to iron these on, sew them on, or just "look at them."
All-in-all, this was a fun step back in time!  I'm sure these will end up in one of my giveaways at some point, going to some lucky collector(s).

Pretty interesting pack. Cool that you got the Angels!

Who would have thought that the Expos, Astros, and the beer-barrel-belly Brewers logos would have made the front of the wrapper?

I totally get the Red Sox, and the Pirates and Reds were winning teams back then. Those others, though? Weird.