Written by Twitch at 5:53 PM
Target finally restocked the $1.59 pack bin when I was in there recently, and with stuff I can post here! Pulled some nice stuff too, so look for the three packs that haven't been posted on here yet soon. The subject of my post today is not from the $1.59 bin, though it was purchased at the same time, and is no less awesome. 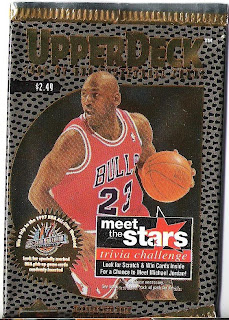 Like a blast from my collecting past, I couldn't pass up this pack starting at me from a $3.99 clamshell of older and most likely crappy basketball cards. It helped that there was a Joakim Noah RC also staring at me too, but this is why I got it. I collected basketball when I first started really collecting in 1996 (I got baseball cards here & there as early as four years prior, but didn't actively collect them then), and this came along when I was really kicking it into high gear. This is also the beginning of the era where Upper Deck really found their groove and just made more unique and better looking cards than anyone else, across all sports. I'll let you be the judge on whether they had figured it out yet with this release though.

Also, the random cards inside the clamshell were much less crappy than I was expecting too, so that was cool. But that's a post for my own blog. Someday. Maybe... Anyway, here are the odds, even though none of these will be appearing in the pack, sadly (because most of them are pretty bippin' amazing): 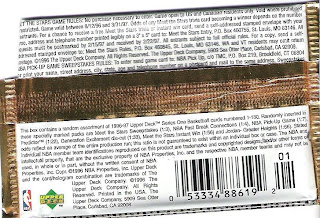 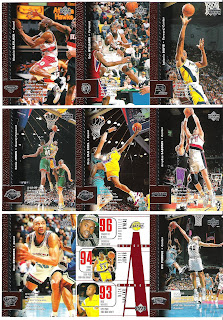 The scans don't do these any justice at all. The foil is actually a really bright bronze. Thus the "your mileage may vary" if they'd found their stroke by that point.

Mookie Blaylock
Eric Williams
Antonio Davis
Eddie Jones- unsuccessfully attempting to dunk on Shawn Freakin' Kemp, but successfully drawing a foul probably.
Nick Van Exel
Arvydas Sabonis
Blue Edwards
Lakers Building a Winner- They did have their stroke on this subset at least. The red part has a subtle foiliness to it, a hint of shine that's almost more like glowing.
Will Purdue 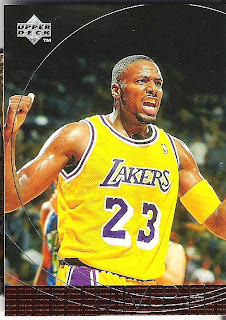 The Game In Pictures "Triumph"- Another cool subset with better use of foil than probably anything that has come along in the last five years. That would be Cedric Ceballos. He appears on the back of the Building A Winner card too.

The photography is amazing, whether you like the design or not. And the front is only the beginning. Check out the backs! 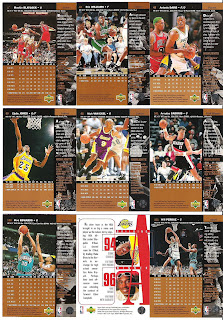 Full stats, a second decent-sized action shot, a blurb and career highlights. Great use of space. And hey look, there's Kobe hiding on the back of that building a winner card! The red on the back isn't foil and lacks the glow. 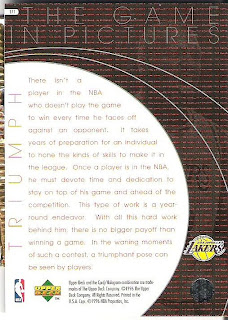 There be the back of the triumph card. I like the idea of the set. Like a less nonsensical (but not quite as insanely pretty, though still nice) version of Emotion.

In summation, 40% of the pack was Lakers. Fortunately their insufferable reign of terror was only being built at this point in, so I'm okay with this. And I think the cards look good even without requiring the use of my fierce '90s nostalgia filter (seriously, best decade ever!). Only card I'll be keeping is Eddie Jones, because I was a fan of both him and Shawn Kemp back in the day. Man, has it really been almost 15 years since these cards came out???
Time keeps on slippin'...

Would love the Sabonis card if you're not planning on keeping it yourself.