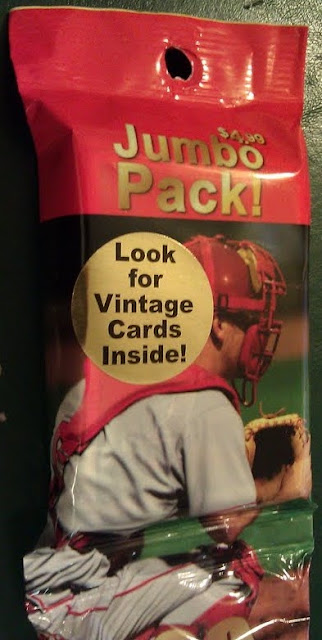 I've seen these now with white, black, and red wrappers...it seems that the red and black versions are newer and contain way more vintage cards than in the earlier versions.  Rather than bore you with all the cards here are a few of the highlights.

There really is no greater feeling when writing this blog then when I come upon great cards that I had no idea existed AND pulling them from a cheap repackage...who wouldn't like to find a Willie Stargell in their pack.


In total, there were five 1977 Topps in my pack with this being the highlight, Kent Tekulve's third year card.

How about a Craig Biggio rookie card for good measure?
If you've never opened one of these packs, let me warn you that coalation of the cards is not the greatest.  Typically this means that you get three copies of a 1987 Ed Lynch and his many, many chins.  But in this pack I got three Jim Rice '85 Donruss, a set which I have probably fewer than 20 cards of.

The pack warned me to "watch for vintage cards" and it didn't disappoint.  Here are the other four '77 Topps I pulled...all were in great condition.

If the baseball card monopoly has gotten you down I would recommend giving these a try, but only stick with the black and red versions. The white version doesn't seem to have as many vintage cards in my experience.

I just wrote about these (for like the fifth time).

I don't recall any white versions. The ones to stay away from around me (unless you get lucky and pull a relic) are yellow.

I also haven't had collation issues like that. Once every third pack I've had one with 2 of the same card. That's it.

I really like the vintage ones. Have pulled 2 '68s out of those.

I have read multiple Night Owl posts about these wondering which repacks contained the vintage cards. Thank you for posting the package.

Tekulve's eyes gotta be airbrushed on there. No way that's legit.