Written by Jafronius at 10:11 PM
Greetings!

Long time reader, first time poster, so be gentle. After following the site (and several of the blogs) for a few months, I decided to jump into the fray and partake in your reindeer games after unearthing several boxes of random packs. I never got around to filing them away with the rest of my cards, but my inactivity may be to the site's benefit. So, yeah, I planned it that way, yeah, that's the ticket.

For my inaugural post, I decided to go with the very first pack of anything I bought. Hey, it was bought over 25 years ago, but since it was just a pack, I figured it counts. I humbly present for your review, a pack of 1985 Transformers Action Cards! 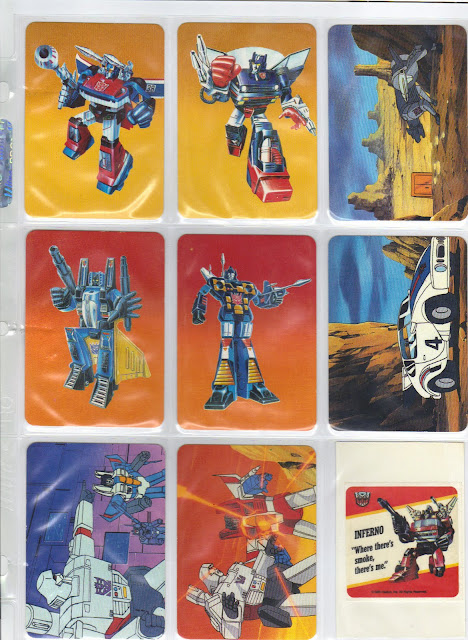 From what I could gather from the interweb, these cards were produced by Milton Bradley (no, not that guy). There were 192 cards in the set, consisting of the box art for most of the "Generation One" Transformers and stills from several first season episodes. The eight card packs also came with a sticker. The sticker had the box art image for one of the Transformers as well as that character's motto. 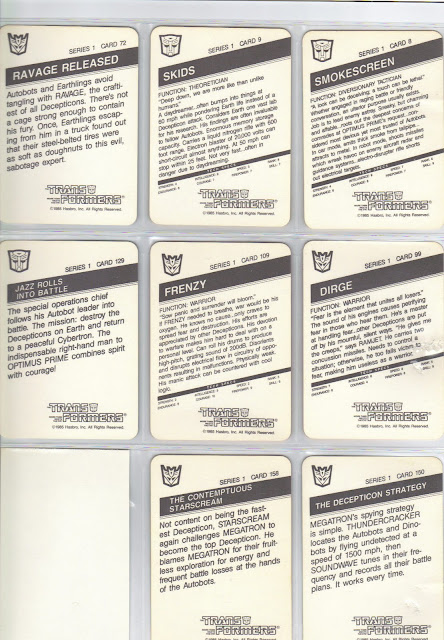 The backs of the character cards gave a summary of the "Tech Specs," which was the character's bio found on the back of the box. The backs of the episode cards gave a generic summary of the scene on the front. They also referred to these cards being from "Series 1," but there was no Series 2 ever made, sniff, sniff. Finally, this pack was bought in Canada, but it appears the set was not produced with French subtitles.

I found it funny that my younger self did not want to waste the sticker, so I taped it to a paste of construction paper. Yes, I said taped; closer inspection reveals the sticker is still on the paper it came from!

Anyway, hope I didn't bore you all with this post. Next time I'll scan the cards individually (25+ year old cards deserve to rest in their page, in my opinion). Thanks for reading!