Written by Jafronius at 2:55 PM
Greetings!

Will the sophomore effort be as good as the rookie post? I doubt it. But here it is anyway...2002 Topps Series 1!!! 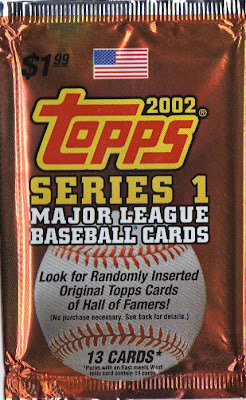 Will there be a randomly inserted original Topps card of a Hall of Famer in this pack? Well, no:

I remember when Jaret Wright was supposed to be a big deal. I like the Negro League Stars jersey Cedeno's wearing. They should have more pictures of players in the alternate jersey; it adds some variety to the team sets.

#155 Omar Daal
#210 Hideo Nomo
#208 Marquis Grissom
By this time, all 3 players above have been well travelled. Nomo's in the middle of the 1 team per year tour.

I like the card backs, clean with a picture of the player and complete stats. Anyone try to get the hat? The back of the card says you have to find a Team Sticker Card randomly inserted into packs; on the card, there's a small sticker you'd use to fill in the spots on the Race Card. Get all the teams on the Race Card and you can mail it in to get a baseball hat of your choice. I don't remember getting a Team Sticker Card.

Oh, and the America United We Stand card is not an insert. It is shiny, though.

Hunter's entering his prime here, and Paulie's a couple of years into it.

FYI, the checklist boarders are white. Was 2002 supposed to mimic the '89 Topps design? All you need is the team name spelled out on the wave.

Anyway, that's the pack. More later eventually. Thanks for reading!