Written by Dan at 2:05 PM
This could be the first post of the year, why not? After spending a night out on New Year's Eve and (for this year anyway) the night after New Year's Eve, what comes to mind first? It's not overwhelming exhaustion because you're usually too tired to think about that. It's not about the one that got away because most of the time at parties like that, there's not much chance anyway. For me, at this point, there's one thing, filling up on greasy food at a late night stop. It can be chicken and waffles, breakfast omelets, milkshakes of enormous size (with fries for dipping), or what have you.

In the '90s, Denny's was a purveyor of a certain atmosphere of 2 am breakfasts, the grand slam, and packs of baseball cards included for a small addition (usually 59-79 cents) to the cost of the meal. Let's see what the 1995 edition looked like.  The checklist was one card of one player from each team (only 28 in 1995). 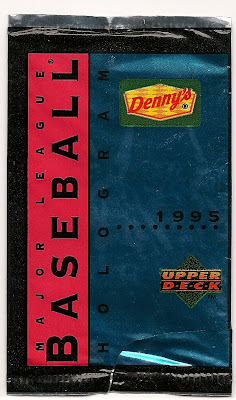 Here's the wrapper.  Ooh, a hologram.  It's not just a card...it's a hologram.  Does this mean that the player image can be projected into the subspace and becomes an illusion or does it mean it shines in strange colors when tilted? 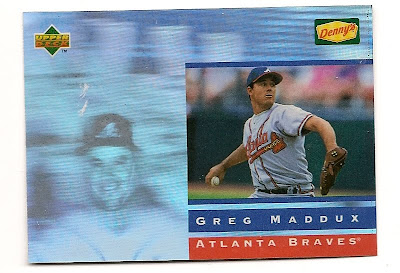 It looks like Greg Maddux wins. The hologram on the left is actually kind of strange.  When the card is tilted from left to right, Maddux has a smiley face and then a stern face.  This must have been because of the strike and winning the Cy Young award.  It's hard to reconcile those two emotions.

Email ThisBlogThis!Share to TwitterShare to FacebookShare to Pinterest
Labels: 1995 Denny's

I remember these. I had the Maddux card!