Written by Jafronius at 3:44 AM
Greetings!

I posted some Episode 1 Widevision cards yesterday.  Nowhere on the package did it say it was Series 1.  Is it a surprise that there was a Series 2?

Good thing there wasn't a Series 3; they can't fit a third character on the wrapper.  This is still an 80 card set, with a couple of Chase Card subsets.  Let's see what we get: 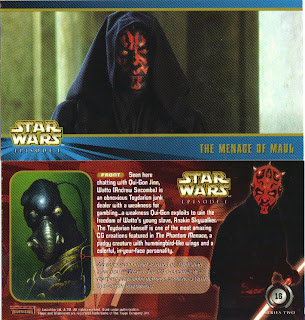 The front of the Watto card is a picture of  Qui-Ron Jinn and Watto in his junkyard.  While the Series 1 cards followed the movie plot, the backs of the Series 2 cards were more on general or behind the scenes information. 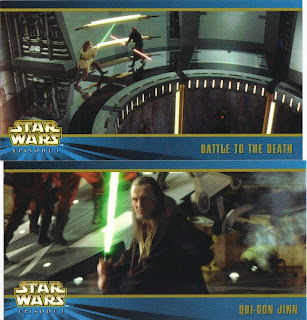 The first few cards in the set were reserved for the major characters in the movie (#1 was a Title Card).  Again, the base cards from Series 1 followed the movie, so there were no base cards there dedicated to the characters. 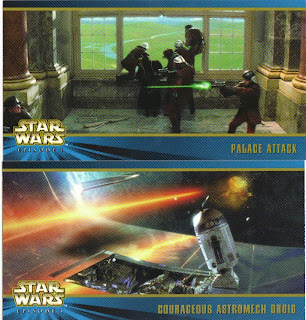 The cards are glossy and follow the established Topps Widevision format.  Series 1 had red borders while Series 2 has blue borders. 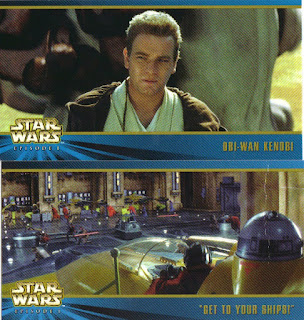 That's the pack.  Another bummer that I didn't grab one with a Chase card in it.

I hope everyone has fun tonight and that you all have a Happy New Year!  Keep up the great work on the blogs and keep posting here!  Thanks for reading!