Written by Jafronius at 8:42 PM
Greetings!

A long time ago, in the same galaxy, the Toys R Us in town used to have large repack theme boxes.  There were Pokemon and Yu-Gi-Oh boxes, but what caught my attention were the Star Wars boxes.  It was something like ten bucks for 20 packs.  The focus of my purchases were the old Star Wars CCG packs (and if you're all good little boys and girls, I'll get around to posting some of those packs), but they filled out the box with other packs as well, like these...2002 Topps Star Wars Episode II: Attack of the Clones! 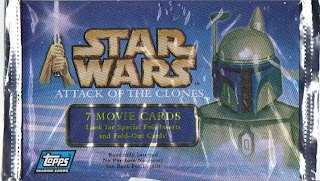 According to the interweb, there were 100 base cards, 10 silver foil cards, 8 prismatic cards, and 5 panoramic cards.  They came 7 cards in a pack, and the packs were graced with several characters from the movie (this pack has Jango Fett staring me down).  Let's see what we get: 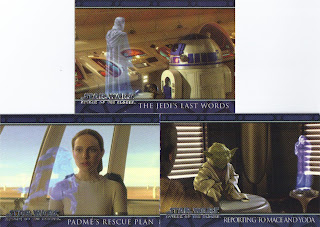 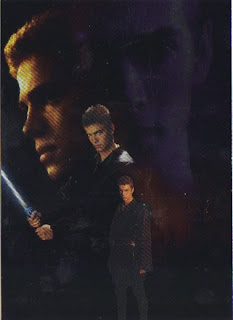 The Silver Foil has a ratio of 1:2, so not very exciting.  Less exciting is the back, so I didn't even bother to scan it.  It just gave the name of the character and the subset number.  It is shiny, though. 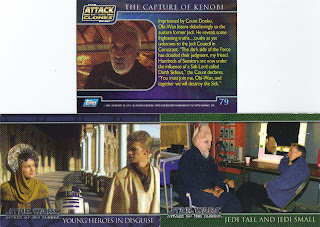 The front of the Kenobi card is the scene where Obi-Wan is suspended in mid-air with Count Dooku interrogating / taunting him.

That's the pack.  The card quality is good, with decent pictures and enough info on the back.  In my younger days, this would definitely be something I would be trying to complete.  Who knows, I may already have the whole set, based on the number of packs they used as filler.  More later...thanks for reading!