Written by Jafronius at 1:50 PM
Greetings!

Hope you all are enjoying your weekend.  If I got the Blogger scheduler down right, this post is going up the same time as the world-wide premiere of "The Day of The Doctor", the 50th anniversary episode of the longest running sci-fi show in history, Doctor Who.  The BBC is airing the episode at 7:50PM their time, and since it's a simultaneous release, we here in Chicago get to see it at 1:50 PM Central time.  I guess in Australia, it airs at 3:50 AM Sunday morning...yikes!  They are even screening the episode in theaters in a 3-D format.  As you can tell, it's a pretty big deal for fans of the show.

Anyway, to commemorate this occasion, here's a pack of 2011 BBC Doctor Who Monster Invasion Extreme!


I got a pack of this and a pack of the debut release last year at the 2012 Chicago Comic and Entertainment Expo (C2E2).  I don't think there has been many Doctor Who card sets released since the show's return back in 2005.  Not sure why either.

The magazine the cards are derived from appears to be cancelled, as is the website devoted to the game.  Therefore, all you need to do is gaze with wide-eyed wonder at the cards from the pack.  Geronimo!

Here's three of the "adventure cards."  Again, it appears you need to use the stats on the character cards to see who will win the face off.  Just like in the last set, you get the nod to the classic Who with the Sea Devils card (the episode aired back in 1972, when Jon Pertwee played the 3rd Doctor).

The shiny card is the rare card in the pack.  Just like before, I have no idea if only the rare cards are foil.  The card backs are slightly different than the premiere set: 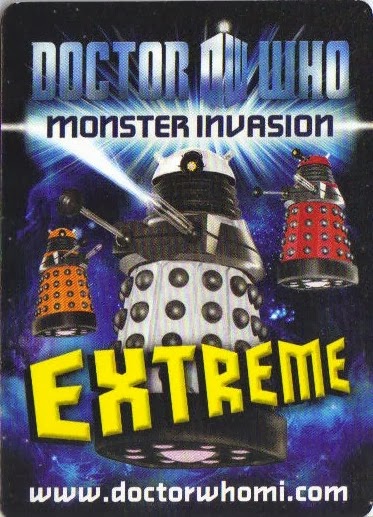 Anyway, that's the pack.  Enjoy the rest of the weekend, and happy 50th birthday to the good Doctor!