Written by Jafronius at 11:56 PM
Greetings!

I hope everyone's doing well and enjoying the holiday season.  I've got the rest of the week off (use 'em or lose 'em), so of course there are big plans to get lots of stuff done around the house.  And as usual, I'll be lucky to just be able to get one thing done - in this case, get the unused Christmas decorations back into the dark and scary crawlspace.

Here's another pack of a set we've all seen on the site before, and fitting my M.O., I'm putting it up because it's in a slightly different configuration.  It's a pack of  2006 Upper Deck Series 1 & 2 Combo!

I found a discounted box of this a long while back and thought it was an interesting concept.  Perfect for the buyer who didn't get around to getting these packs when they were first released, right?  That's how I rolled, because Upper Deck was still 3 bucks a pack and why would I buy them at that price when good ol' reliable Topps was a buck cheaper?  Of course, there'd be no inserts or parallels or relics or anything cool like that, just a pile of base cards when it was all said and done.

As the box said, there were 5 packs in the box, 32 cards per pack.  The packs were clear so you can see the first card and the last card.  There were also Season Highlights cards, exclusive to the box.  I took a pack and scanned the cards that caught my eye.  Here's what I got:

And here's the fronts and backs of the mascot and Season Highlights: 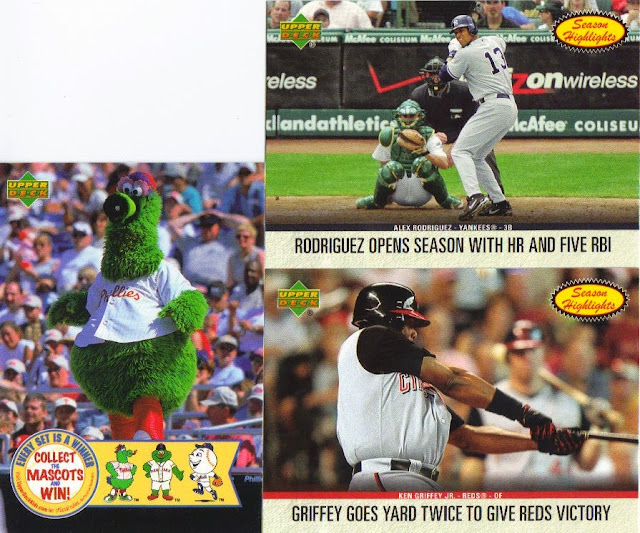 Anyway, that's the pack.  Enjoy the rest of the week, and thanks for reading!