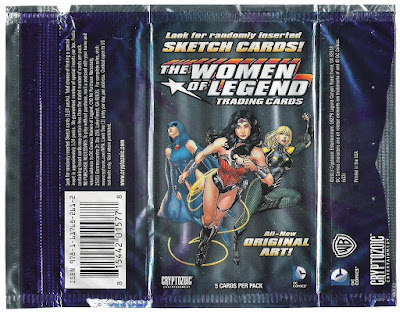 BIG HUGE EDIT: This post was scheduled to go up on the Fourth of July... 2015.  But it didn't post and I forgot about it until now.

As mentioned in that BenchWarmer Eclectic post, I also bought a box of this stuff.  For having such a huge sketch collection, this box provided only the third one I've ever pulled on my own, which you will see amongst the handful of packs I set aside for this post.  I will also add where you might know some of the more obscure characters from. 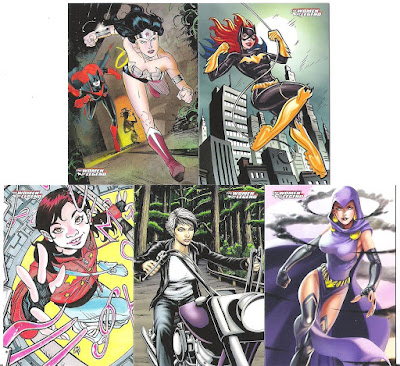 We'll start it off with an all base pack, because Raven was in it.  I can't verify whether or not the art is All-New ORIGINAL ART or not, but there are plenty of different styles going on to keep it interesting.

Now for some insert & parallel packs.  This has a Katie Cook sticker in it.  You should get two of each of the inserts per box, and a half dozen foil parallels.

This one has a foil parallel.  They look much, much better in real life than they do scanned, which is something I'm sure you've never heard about a foil card before. :P

Duplicate Damsel (Legion of Superheroes), Zatanna, The Engineer (The Authority) Foil Parallel, Fire (Justice League International), Indigo & Star Sapphire... You can just read the back from the dupe in the to get a vague idea of them.  The Green Lantern mythos went all sideways (not necessarily in a bad way) a few years back. 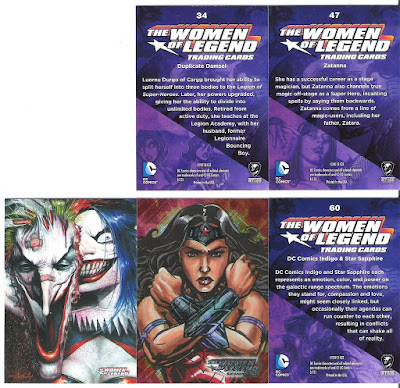 Lotsa duplicates here.  The base set is only 63 cards, so there are a lot of 'em.  So you get backs for them.  The insert here is Gail's Picks (as in bigtime celebrated writer Gail Simone) of Wonder Woman. 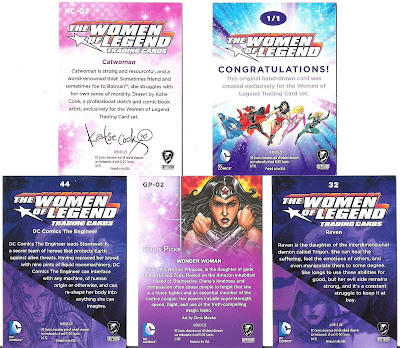 Here are the insert & hit backs & stuff, and I'll leave you with a closer look at the sketch card: 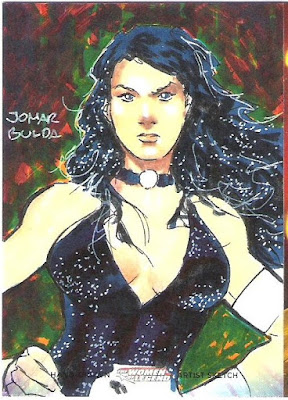 I really like this sketch card.  I like the character, and Bulda one of my favorite sketch card artists, and he's one I didn't have yet.  So yeah, this is pretty rad.


That's all for this one, fanboys/girls/somewhere in between/none of the above.  As always, thanks for stopping by.

I really like this product. You got a nice sketch card in the box, which always helps. I don't think I have a Bulda sketch yet, but he's on my list of artists to seek out.

There is a ton of that Marvel stuff in that buyout I did last month. Getting ready to start posting (have to scan them first) some of the inserts/promos and parallels and then on to the sets and singles. i didn't realize just how many Marvel sets was out there.

Raz- He's great! He's towards the lower end of the price scale (last time I checked anyway, it's been awhile), but the very best stuff I've seen by him is a bit reminiscent of Melike Acar.

John- I am very much looking forward to this! :D