Written by JediJeff at 6:08 PM
This set name is quite the mouthful. As Topps has done in the past couple of Olympics (summer and winter), here is another set released for the quadrennial event. 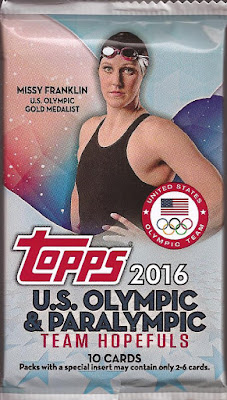 As Billy at Cardboard History pointed out (and I never thought about), there are just focusing on the US team. Also - it's not really the team, but possible members of the team. I guess to get them out in time they would have to put in the athletes they feel will make the team. But it's still a crap shoot. I am with Billy on his thoughts that it's just USA in the set. A larger set that pulls in the other countries would be a nice thing. Let's face it - the US sucks in ping pong. So barring some miracle, or a really drunk worker at Topps, we'll never see that sport represented in this set.

But I have digressed from the purposed of this post - showing cards. I picked this up at Target. Not sure if the hobby version has more cards be pack. The set is small - only 75 cards. But you get relics, autographs and parallels. 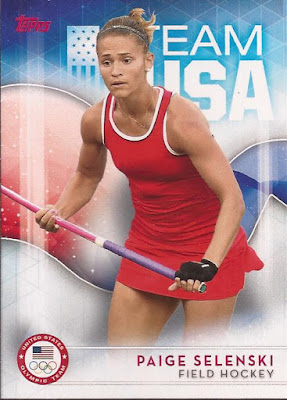 Very simple design. One nice thing about the base - no foil. At all! A simple image of the athlete shopped in front of some basic background with "Team USA" in the back. Paige is an alternate for the field hockey team in Rio. 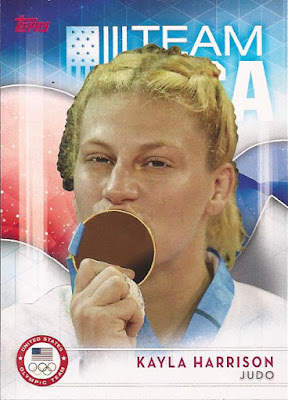 Lot of medal kissing. Kayla won gold in London, the first judo gold the US has ever won. She is defending her title in Rio at the 78kg class. 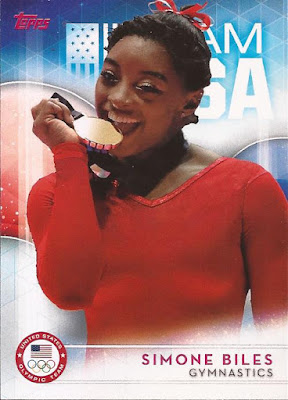 Medal biting too. Simone Biles was part of the women's gymnastics that won team gold in Rio yesterday. She will be going for the woman's individual all around in the coming days. Good chance she will bring that home as she is a 3 time world all-around champion. 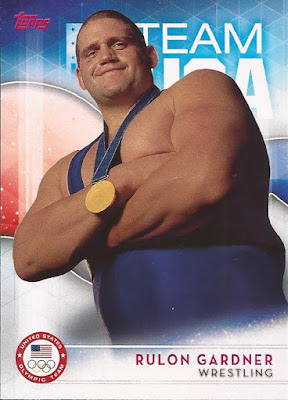 Rulon won gold in Sydney beating Russian Karelin. If anyone recalls, Karelin was undefeated for 13 years in competition. He also won a bronze in Athens in 2004. 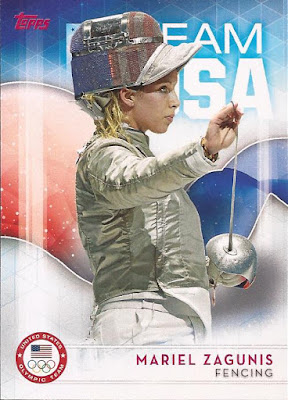 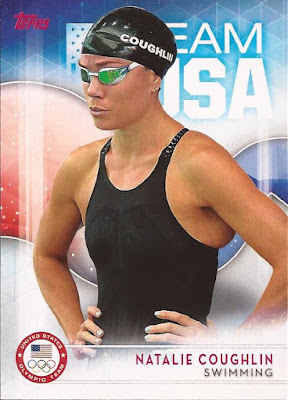 Natalie has won 12 medals in Olympic competition and is tied for the most medals won by an American woman at the Olympics. She was the first woman to swim the 100m backstroke in under a minute. 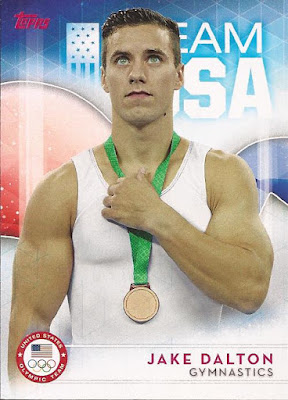 Jake was a member of the 2012 men's team that finished 5th, and is back on the team in Rio hoping to medal in the team and individual events. 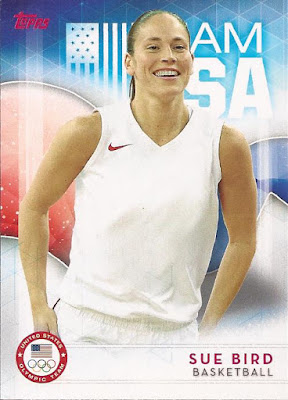 Sue is a three time gold medal winner with Team USA at Athens, Beijing and London. She is in Rio hoping the make it 6 straight golds for the US women's team. 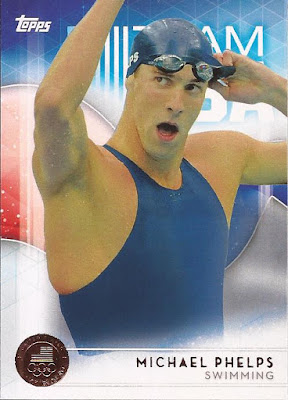 Two things you will notice. First, the Topps logo is now white instead of red. That's because the US Olympic logo at the lower left is bronze foil. This is one of the three parallels you can pull. Big shock - one is bronze, one is silver and one is gold. You are guaranteed a bronze in each pack. The silver fall 1:2 and the gold 1:3. There is also a 1/1 gold rainbow. 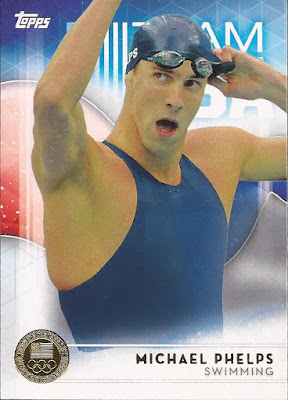 No - that is not a mistake. I received two Phelps parallels. The bronze above and this gold. I am the silver and a base short of the rainbow. One thing I also forgot to point out - the athlete's name is also foiled in the same color. Turning it over. 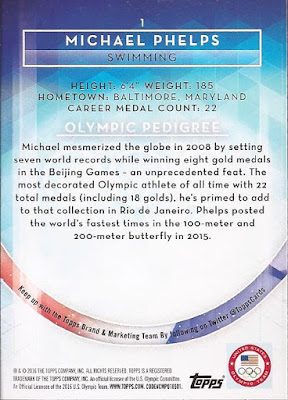 Some personal info and a write up about the athlete. I can tell you the backs of the Phelps were both the same, so you do not get any different kind of card with a parallel.