Written by JediJeff at 6:14 PM
A while back I mentioned of the plethora of early 2000s cards I found. And you factor in other recent packs and I have a good 70 packs or so never before seen here. Now is a good a day as any to get one going.

Here is a pack of 2002 Fleer Showcase. Technically, I do not have the wrapper for this pack. I found all five of these cards together in a box, so I can assume it was a stuff job by my wife who dumped the foil. so the best I can give you is an image of the box I found online. 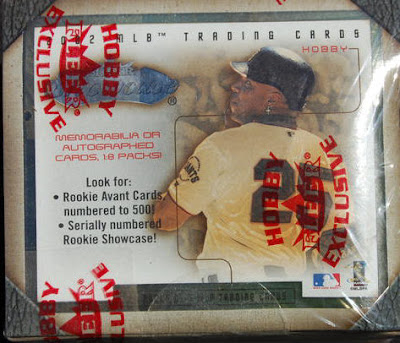 Not really a great image either, but usually you can get the idea of the wrapper from the box layout. We can assume Bonds was on the pack in a pose like we see. And hey - if you want a box it's supposedly under $60 here. Not sure if that site is even still selling, as they have nothing newer than 2013, but the shopping cart still works. But you get 5 cards in a pack. 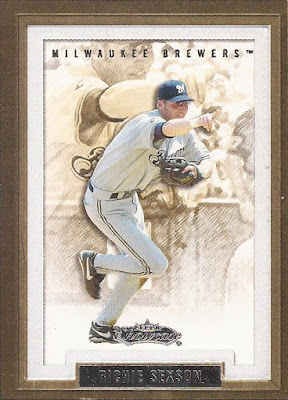 The word of the day is "embossed". It's not "miscut" - that's just a crappy scan. The cards have a colored frame and the images starting at the beige is recessed slightly. Foil team name you can read, but player name and branding that you cannot read. Also, the player themselves have a gloss finish over their image. You can see the single toned duplicate picture of Sexton in the upper left over his right shoulder. 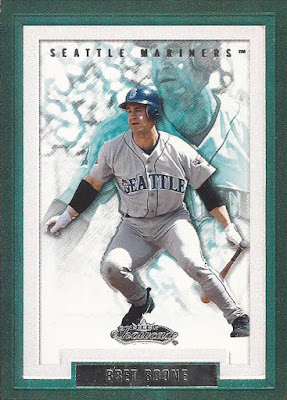 And yes - different team means different border colors. With a photo selection like this, the 2nd larger image behind Brett Boone is kinda creepy. 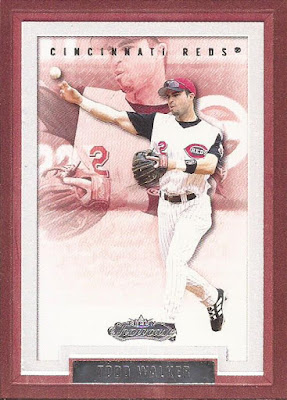 Looks like Todd Walker is painted on the outfield wall. Good framing, though. 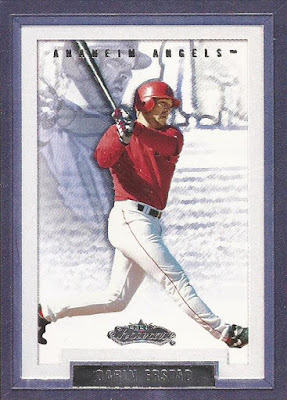 Not sure why the Angels got a blue-ish/gray border. Sure, that was the prominent color for them in 2001. But the uniform is red, and the Angels went through a uni change in 2002. Fleer must have missed the memo. 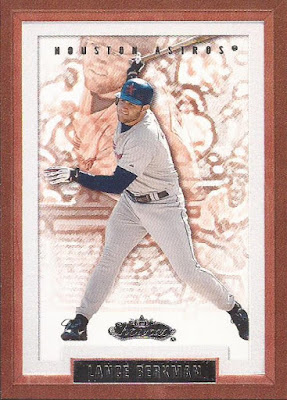 Killer B being killer. Flipside? 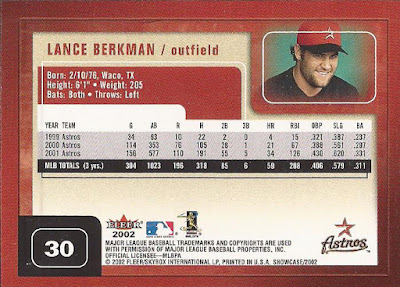 Glossy back on the card. At least we got a new image. Lance was only in his 4th season come 2002. The most a player got was 5 years of stats and then a career total. Also, you can pick up the embossed front on back. It almost works in framing the back design, but looks weird in spots. Fleer also wanted to be sure you could read the number.

You have 70 packs of stuff not posted before on APTBNL? Wow... super jealous. As for this product... I always liked the design. If I found a box on the cheap, I'd buy it and crack it.