Written by Community Gum at 8:30 PM
I'm in clean-up mode around here.  Sometime in 2011 I held an all-Topps group break.  Since then, I've been holding on to the scans from the first pack of each box to post here at some point.  This is that point.  After all, what good is it to open a pack without contributing to the cause? 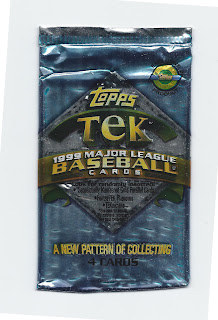 Okay, this actually wasn't part of the break.  It would have been a bonus box if all the spots filled up, but they didn't, so it became all mine.  Here's a small sample of what you missed out on. 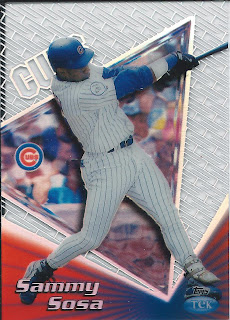 #6A/P-07 - Sammy Sosa - If you don't know, each player has an A & B picture and there are something like 30 different patterns in the background.  This is a weird brick with the team name. 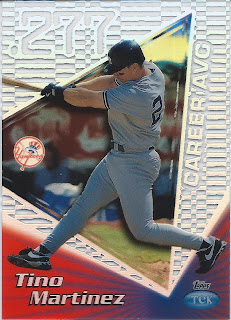 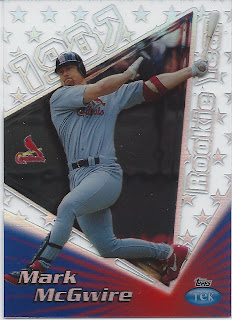 #7B/P-11 - Mark McGwire - The good side of things is the cards are sturdy acetate instead of dingable cardboard.  If you need to get 60 versions of a card, you don't want to worry about corners. 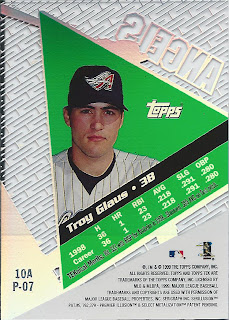 #10A/P-07 - Troy Glaus - Here's the back so you can see they're see-through on the pattern and how the numbering system works.

This won't be the last you see of Tek on this blog.  Oh no.  I have a box of 2000.  Yup, there were a few years of this stuff.  People bought anything back then.  Although, I can't really talk if I bought it myself 11 years later.

I'll take that Tino off your hands, if you're looking to get rid of it.

Sorry, I traded the Tino, along with most of my box to someone trying to collect the entire set with all variations. I had to support that cause!