Written by Community Gum at 9:12 PM
I'm in clean-up mode around here.  Sometime in 2011 I held an all-Topps group break.  Since then, I've been holding on to the scans from the first pack of each box to post here at some point.  This is that point.  After all, what good is it to open a pack without contributing to the cause? 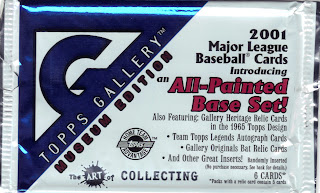 The hunt for the Pujols Rookie.  It's short printed. Ichiro is in here too, but his is a redemption, so beware before you buy sealed wax.  Other than those two, there's not a whole lot to draw home about. 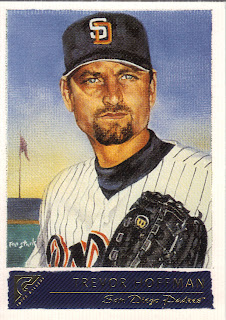 #99 - Trevor Hoffman - As you saw on the pack, it's an All-Painted set, and you can see right away that the artists picked know what they're doing. 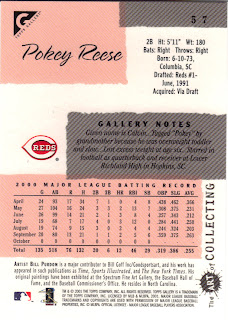 #57 - Pokey Reese - I like the artist blurb at the bottom of the cards.  Too many artistic sets miss that mark. 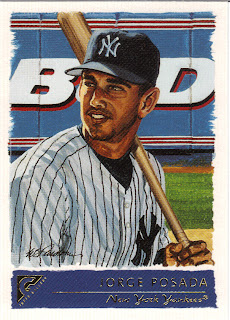 #71 - Jorge Posada - That's one way to hide some un-family-friendly product placement.  Another way would be to not paint the beer sign in the first place. 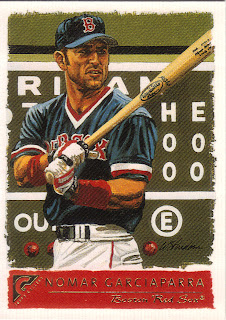 #3 - Nomar Garciaparra - One of the best things about an art set is the background can be virtually whatever.  This may have been taken directly from the photo, but maybe the artist chose to feature the historic Green Monster. 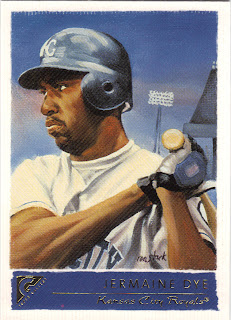 #28 - Jermaine Dye - This might be the least photo-realistic painting in the pack.  That's alright with me.  The bold, thick brush strokes still capture Dye's enthusiasm for playing with the Royals. 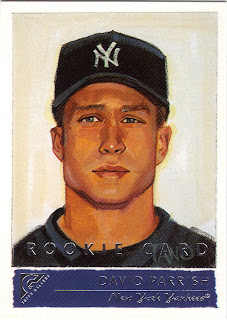 #122 - David Parrish - The rookie cards are SP'd in the set.  David is the son of Lance Parrish.  Can you see the resemblance?

The art is rock solid, but the set as a whole is still very bland and lifeless for whatever reason.  The dull Parrish card is a great example of that.  Blank canvas literally left blank.

It may be pretty boring but I can use the Parrish if you don't want it!

Sorry, but the Yankees were claimed in the break, so it's been gone for a while now.