Written by Community Gum at 9:25 PM
I'm in clean-up mode around here.  Sometime in 2011 I held an all-Topps group break.  Since then, I've been holding on to the scans from the first pack of each box to post here at some point.  This is that point.  After all, what good is it to open a pack without contributing to the cause? 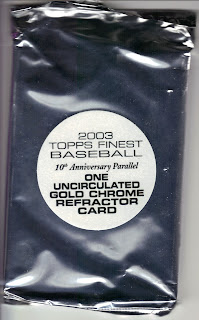 Each master box of Finest came with a Gold Uncirculated X-Fractor numbered to 199 and slabbed.  It's a full parallel of the set, so who'd we get? 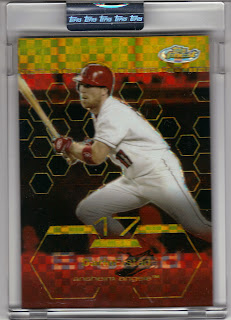 I like slabbed cards as long as they're pre-slabbed.  I'm not a fan of grading.  I know it's more "dangerous" and less "valuable," but if the card is meant to be touched, I want to be able to touch it.  I'm okay not touching this card.  It's nice enough to just look at.