Written by Community Gum at 8:44 PM
I'm in clean-up mode around here.  Sometime in 2011 I held an all-Topps group break.  Since then, I've been holding on to the scans from the first pack of each box to post here at some point.  This is that point.  After all, what good is it to open a pack without contributing to the cause? 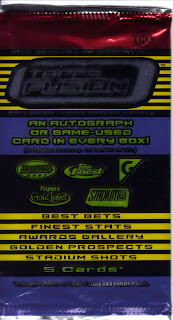 Everyone likes Gallery.  Everyone likes Stadium Club.  Everyone likes Finest.  Everyone likes etc.  Why not throw them all in a big deck, shuffle them up and pack 'em out?  That's what Topps Fusion does.  5 different brands combined in a new set.  The 5 subgroups you see in the yellow lines aren't inserts.  That's simply what they call the different cards using the various brands. 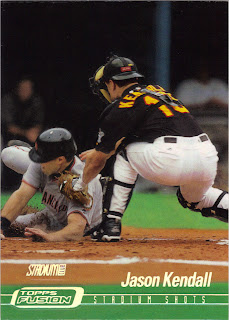 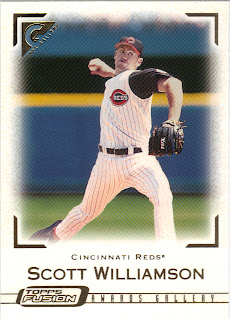 #233 - Scott Williamson - There are loose themes to go with the brands. For instance, Gallery is for award winners.  Scott won ROY in 1999 if you believe the back. 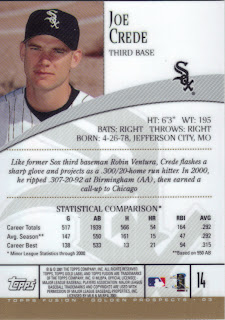 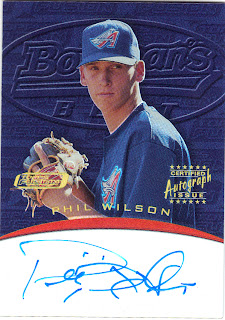 #FA14 - Phil Wilson - Autograph - The first pack delivered the one per box auto or relic.  Phil's signature is all over the place.  My guess is his pitches were too, because he never made it past AA ball, where he posted a 7.31 ERA over 3 seasons at that level.  I'm pretty sure I still have this if someone's interested. 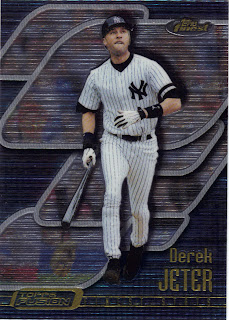 #57 - Derek Jeter - To round it out, we have Jeets standing in front of a digital fart cloud they're calling Finest.

Some players have multiple cards, which honestly is a little annoying.  If all players had 5 cards, that would be one thing, but some have 1, some have 2, and so in.  It's very inconsistent.  Weird set and evidently kind of tough to find.  My guess is it didn't fare too well on store shelves.