Written by deal at 4:59 PM
Team Phungo signing on once again to open another pack here at A Pack to be Named Later.

I picked up a couple of packs of 04 Heritage at a recent card show. The packs were going for $4 a piece and I selected the five packs the vendor had remaining.

Like most folks I generally look forward to each years Topps Heritage release. Since I found myself a little down following the Phillies World Series demise at the hands of the mighty Yankees, I decided opening up some Heritage cards would be the perfect remedy for my unhappiness.

2004 Topps Heritage consists of 475 cards. All the cards numbered 398 and above are short prints as well as selected (starrish) cards throughout the lower numbers. There are several Heritage Inserts in the set including New Age Performers, Then and Now, and Flashbacks. There are also Relics, Autos, and Relic Auto Combos. Hobby Packs of 04 Heritage contain 8 cards and a stick of bubble gum.

I would also like to note that I am opening this Heritage pack as part of the Phungo Spot the Sig! contest. Each week the contest consists of two components. The first is to guess a mystery autograph, the 2nd part is to answer a random bonus question. This weeks Bonus involves this pack of 04 Topps Heritage.

Specifically this weeks challenge for Spot the Sig! participants is to figure out how many of the cards within the pack are of players who were active during the 2009 season. 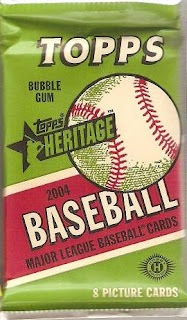 Before we get to checking out the actual cards lets take a look at the pack wrapper. If you click on the 1955 link above you will see an actual wrapper from 1955 topps. We can see that Topps has done a pretty nice job of recreating the wrapper from the original release. 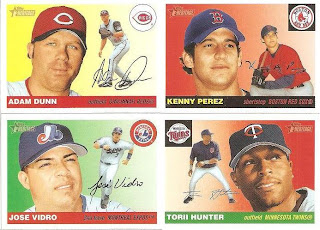 
The cards were pulled in the order I have them listed. For purposes of the STS! contest 2 out of the 4 were in the Major League last year, Dunn and Hunter. Vidro's last year was in 08, while Kenny Perez is yet to make the Major Leagues. He had a decent year (.292 BA) playing for the Rockies AAA affiliate in Colorado Springs in 2009, but he also found himself playing in the Independent Atlantic League in 2008.

There is a Short Printed variation of the Adam Dunn card, unfortunately this is the base version. 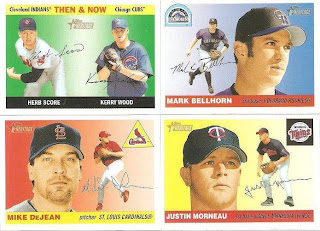 The Morneau card is an early one, but it is not a rookie card.

Interesting anomaly with the Then and Now card - He we are in 2009 and we find Kerry Wood playing on the same team which Herb Score played for in 1955.

As far as STS! is concerned once again 2 of the 4 were active in 09 (Wood and Morneau) giving us a grand total of 4 for the active players from this pack of 04 Heritage.

I wanted to post he B-Sides of these cards so folks good get a look at them. As with the rest of the Topps Heritage brand they are pretty faithful to the originals.

Here is the B-side of the insert card. 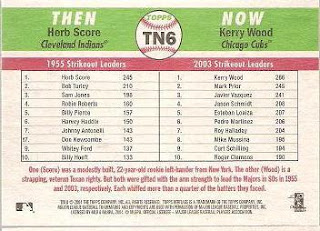 Let me know if you're willing to part with any of the '04 Heritage cards... especially the Cardinals.

These are some nice cards. They started doing these cards during my break from collecting. I need to at least get a hold of the Giants cards.