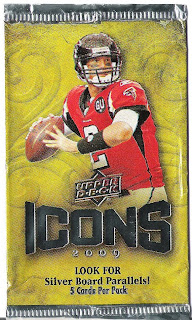 Now for some of that replenished $1.59 pack bin goodness. This was the only Icons pack they had. Not something that ever interested me much in any sport, but what the heck? 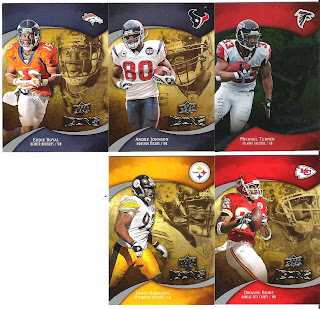 Eddie Royal- I'd forgotten they made the football way nicer than the baseball version with the photo overlayed on the background too. This may have actually been my first pack of the '09 football version I've ever opened. Probably last too. Really does kick the stuffing out of the baseball version though.
Andre Johnson- Soft puncher, judging by the fight. Finnegan was totally unphased. Maybe he just has a really hard head though.
Michael Turner Silver Board(?) parallel #'ed 73/125- Looks okay, but Upper Deck has really lost their touch with foil since their mid-late 1990s/early-mid 2000s heyday.
James Harrison
Dwayne Bowe 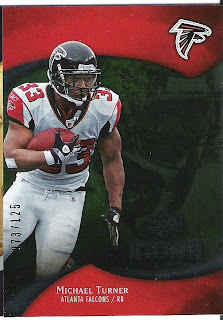 There's The Burner in all his foil card scan failure glory. Proving why he was the best understudy in the game in his four years backing up the best running back of the 2000s, he rushed for 1699 yards (4.5 ypc) and 17 TDs in his first season in Atlanta, and has remained productive ever since, though not quite duplicating those ridiculous numbers yet. Hopefully being a backup his first four seasons will let him be productive well into his 30s ala Thomas Jones though.

That's all for this one. All cards available for sale or trade. Have at thee, matey.