Written by Jafronius at 8:09 PM
Greetings!

At this moment, Game 7 of the 2011 World Series rages on. Most are saying this goes down in history as a classic Series. I guess any championship that gets to the seventh game can be considered to be a classic.

In honor of tonight's Game 7, here's a pack from the last year there was no World Series. From the shoebox of unfiled packs, here comes some 1994 Topps Series 2!!! 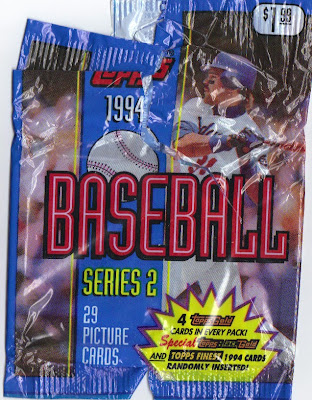 I checked the collection and this appears to be the only pack of Series 2 I purchased / received. Looks like a jumbo pack of some sort since there's 29 cards to go through:

I vaguely remember Darling with the A's. The back of the Coming Attractions lists the scout who signed the player. Per Baseball-Reference.com, O'Donoghue went 0-1 with a 4.58 ERA in his only season with the O's (and the majors). Oquist lasted a little longer, going 25-31 with a 5.46 ERA over 7 years and 3 clubs (O's, Padres, and A's). 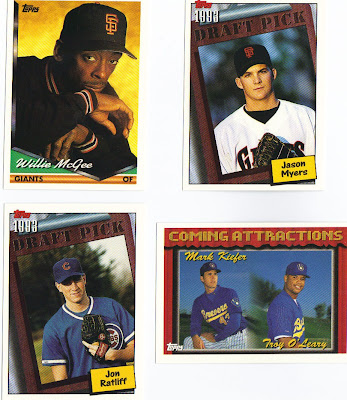 Odd to see Willie in a non-Cardinals uniform. Ratliff was a big Cubs prospect but then disappeared. Going back to Baseball-Reference.com, Kiefer pitched for 4 years with the Brewers, going 5-1 with a 4.29 ERA and 1 Save. Troy O'Leary is the clear winner of the Coming Attractions sweepstakes, playing from 1993 through 2003, peaking with the BoSox and finishing with the Cubs.

It's a Valle sandwich! The card back meets with my approval, with the picture and full stats. ToppsGold was not impressive in this set since only the name and the Topps logo gets the gold treatment. Then again, I don't remember ToppsGold being all that anyway. 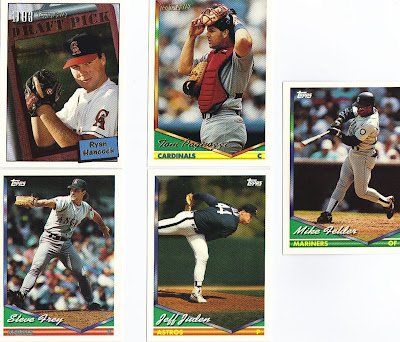 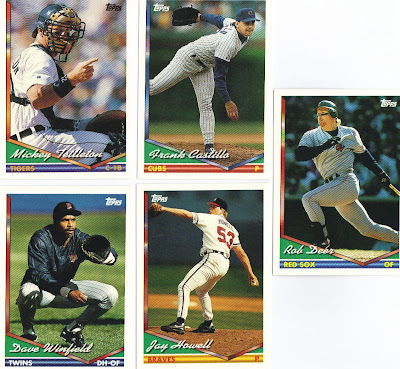 The back of Deer's card showed he led the league in strikeouts 4 times, including 2003. He was traded from the Tigers to the Red Sox that year, so the card shows he stuck out 120 times for Detroit and whiffed 49 times for Boston. If you don't look closely, you'd think 49 strikeouts lead the league that year. 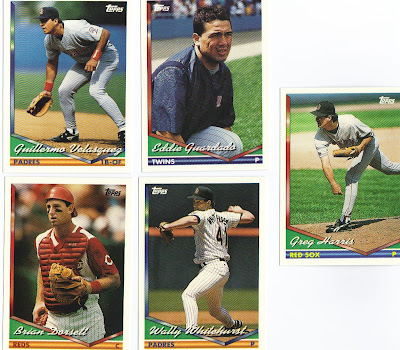 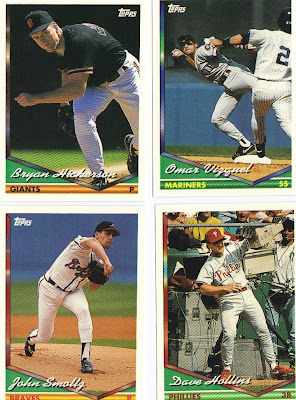 Well, that's all she wrote. Time to see if the Rangers can make it interesting again. Thanks for reading!