Written by jacobmrley at 10:12 AM
I was in the supermarket buying Valentine's dinner for one when the second most depressing thing hit me - we are 2 weeks removed from football and 2 weeks away from even spring training baseball - that's absolutely smack dab in the middle of the darkest sports time of the year (unless you like relentless basketball).  So I did the only thing I knew would (briefly) cheer me up, I headed for the silly sports card vending machine at the front of the store.  Like an 8-year old, I pulled all the change out of my pocket and found I had $1.41 and quickly did the math of what would be the most economic use of this pile of coins.  There is always a few old junk wax packs in the machine for a buck or less, but I saw something this time I hadn't seen before: 1995 Topps football packs.  Seeing they were only $1.25, it was clear that this would be a fine way to kill a few minutes before I ate my tuna steak and roast potatoes while watching bad TV on the most "romantic" night of the year. 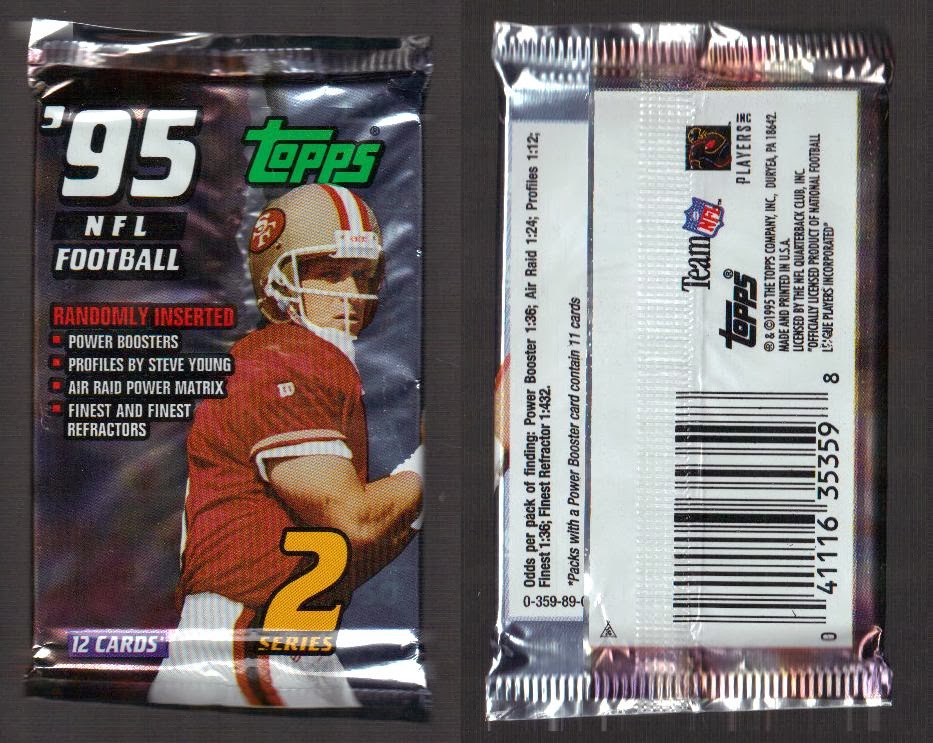 The pack itself is both modern and yet also seems so old fashioned.  Look at how brief the odds are for inserts - just five listed and a little blurb about the Power Booster cards.  That's it.  These days, it is listed in the tiniest font possible, quoting an endless array of parallels and impossible autographs, not to mention the disclaimers about the odds being averages and the fact that these cards might not be real, don't mean shit, might not exist, and have no value, etc. etc. etc. ad infinitum ad nauseum.  One more thing, on the front, shouldn't the word "series" be above the 2 and not under it?

Enough about the sad state of current cards, let's look at these beauties: 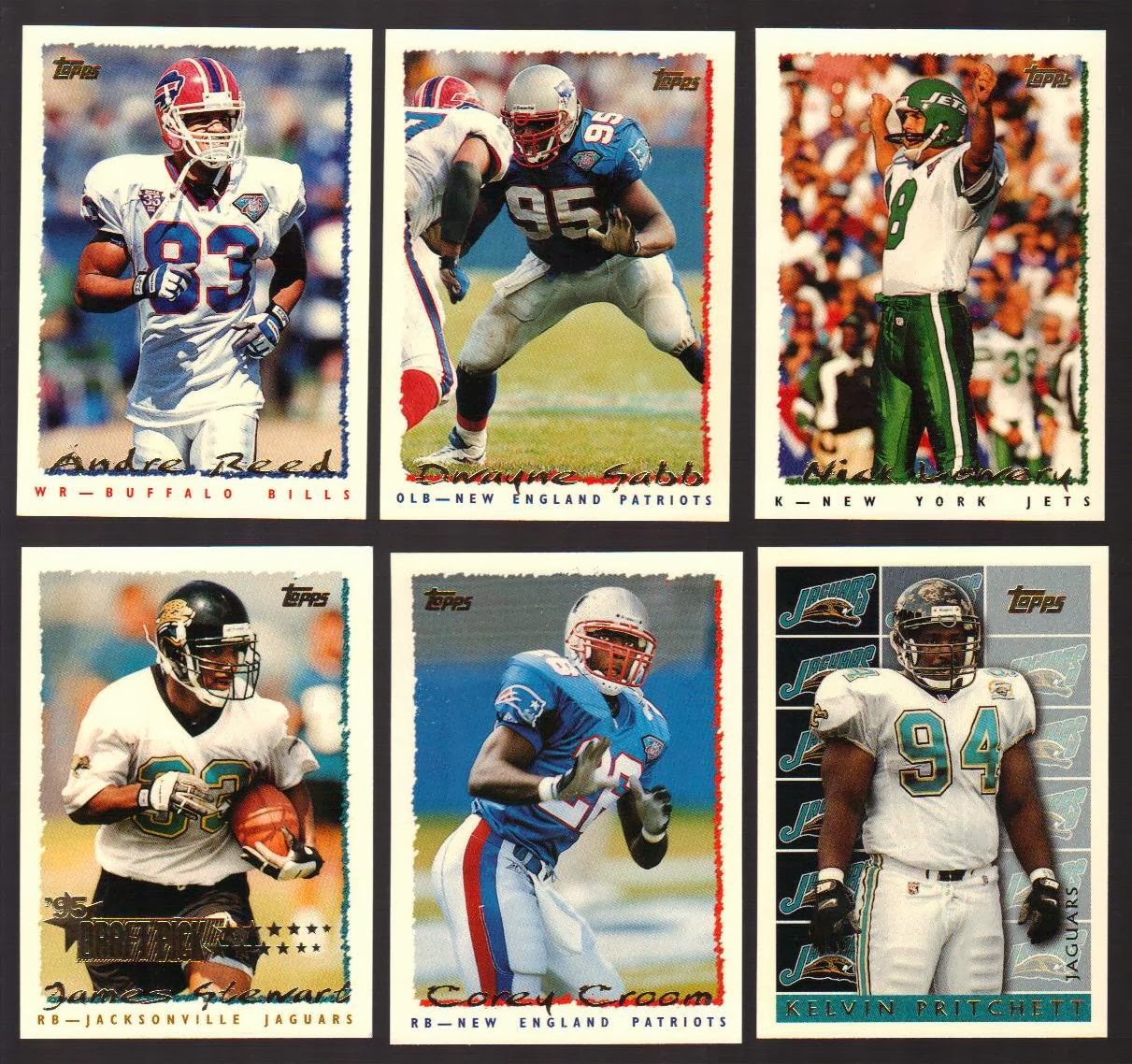 Andre Reed just made the hall of fame so that is a nice start and if you are a Patriots or Jaguars fan, the beginning of this pack is right up your alley.  I honestly have never heard of either of those Pats players and I lived in Boston in 1995.  I wonder if James Stewart had a Jimmy Stewart impression down for the occasions that required it?

The design of the 1995 Topps football follows the baseball design (as the basketball cards did as well), something Topps did a lot in the 1990's.  I also liked when they customized the design elements for the sport while keeping the overall design in tact.  Alas, this design does not require that.

The football backs are also almost identical to the baseball backs, though they don't make the direct reference to Diamond Vision for obvious reasons.  Plus, Nick Lowery and I have the same birthday.  Lovely.

Let's take a look of the rest of the pack: 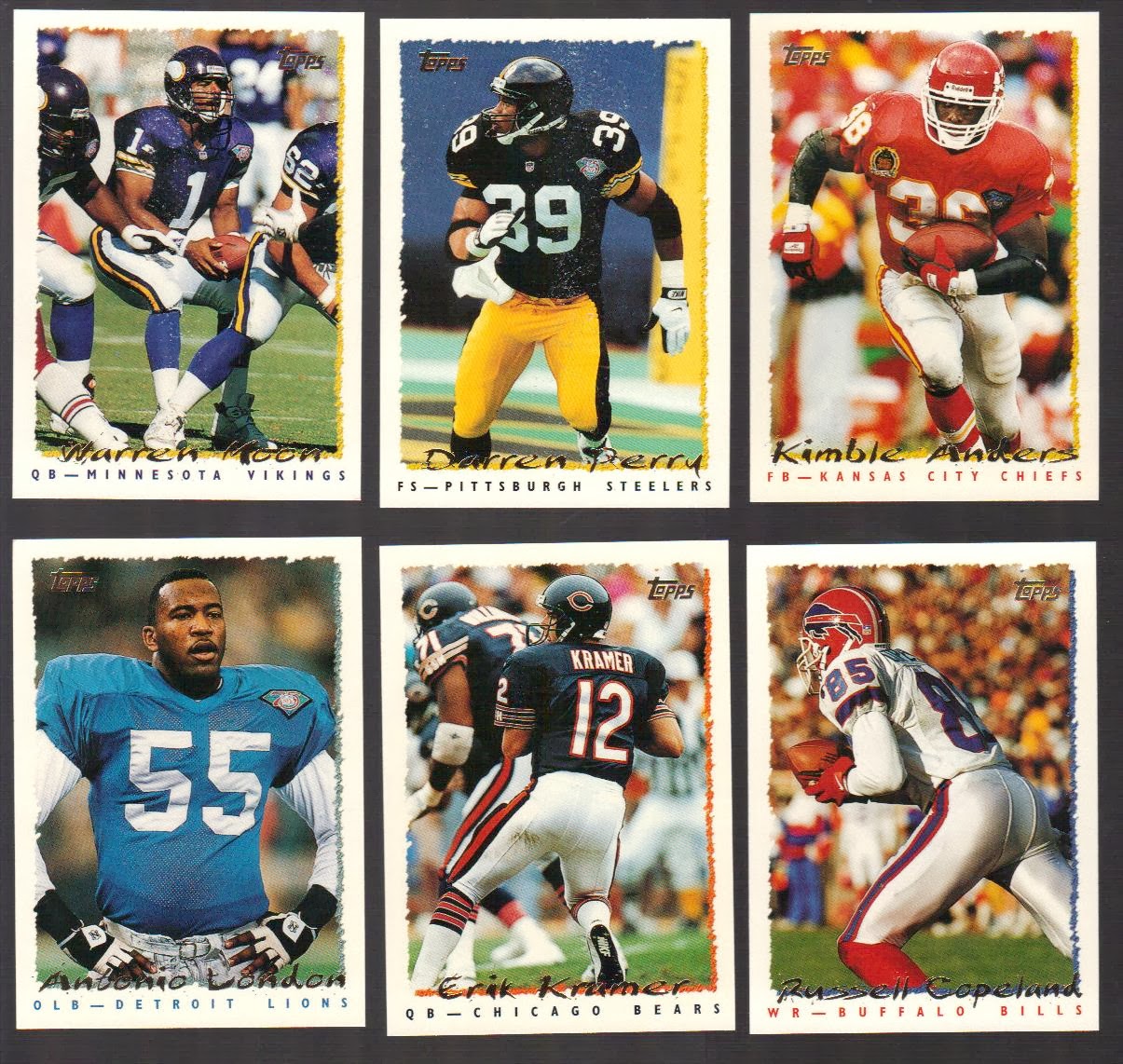 The back of that Warren Moon looks a lot better than the front because thanks to time and pressure, it was stuck to the front of the Darren Reed and they had to be physically separated, thus wrecking the front of both cards.  Pity, since I am a huge Warren Moon fan (no, really) and even have a Moon Vikings jersey from back in the day.  The rest of this pack was downhill from there, with Chiefs fullbacks and failed Bears quarterbacks (is that an oxymoron?) being the lowlights.  We end the same way we began, with a Buffalo wide receiver, though I seriously doubt Russell Copeland will make the hall of fame.

I have never seen a sportscard vending machine. It looks glorious and I probably wouldn't be able to stop myself from going to that store every week.

The Shoprite by me has had this same one for years. Most of the stuff in it is junk, but every once in a while there is some new(ish) packs or some local team related lot in there. It is definitely designed for the impulse buyer and for small children to beg their parents.

Oh my goodness I wish I one of those machines around here.

Erik Kramer wasnt that failed, as he did have at least one good year for the Bears... cant be mad about that.. hehe..yes, im a Bears fan..

I would probably use this machine every day if it was near me. And hate myself.

I almost got into that business several years ago. I didn't think it could be very profitable.