Written by JediJeff at 6:16 PM
Hey all. It's been WAY TOO long since I have posted here. Which is wrong on my part, because I have about a half dozen scanned packs ready to post. I wish I had a good excuse, but I don't. I can only blame the Dutch (looking at you, Jeroen).

Yesterday I had some free time to hit my LCS. I was looking for cards for my Fox project, but nothing fit my budget. Bought a box of 92 UD baseball junk wax for fun ($12) along with a couple packs. Let's post the UD SPx cuz 1) I don't feel like scanning a jumbo pack of 2014 Topps, 2) it needs to be on this blog and 3) HOLY COW! You'll see why. 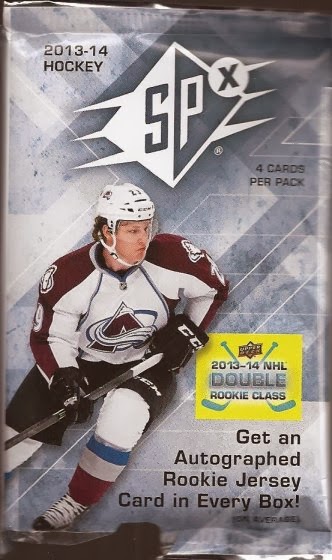 The box I believe is 12 packs with 4 autos or relics. I always buy at least one pack of each Upper Deck hockey release a year just because. I am glad Jeff behind the counter made this the day to purchase SPx. New rookie heart throb Nathan MacKinnon on the cover. Double rookie class logo as is on all the 13/14 releases. Just 4 cards in the pack. I got 5. And the dummy card. 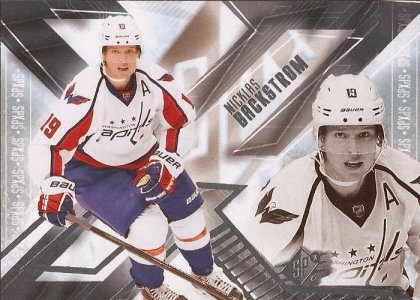 Decent start with a Backstrom, though the guy will never get a Cup if he stays on the Capitals. Pretty busy design going on. The name is actually in a light blue-gray foil, as is the logo. Doesn't show up so well on my scanner. If you see the blueish hue off on the edges, there's the color. The B&W photo is not bad in this design, if it wasn't a copy of the color image. 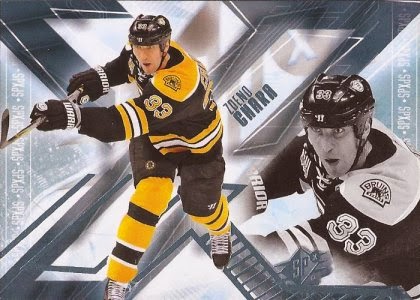 Chara next. You can see the blue foil a little better here. Bit of a derp face on Zdeno. 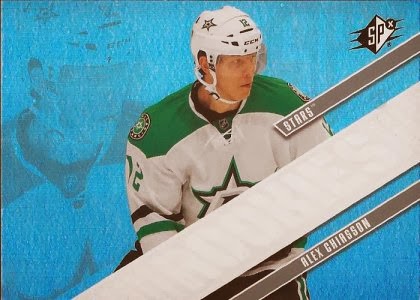 Now why my scanner cannot pick up the blue foil, but makes this foil-ish card nothing BUT blue is a mystery. Here's a rookie insert. Look r-e-a-l-l-y close as that white sash and you can see "ROOKIES". And it's as hard to see in person, so no blame to my HP scanner on that. Yes, that is a very faint image of the same guy on the left. 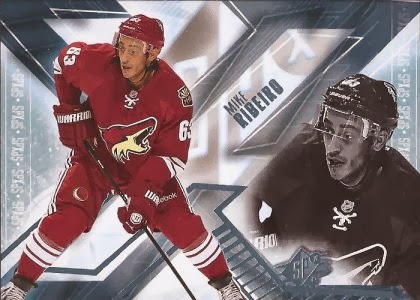 Mike Ribero. Well, each set has it's filler. I just noticed the team name is not on the front of the card. 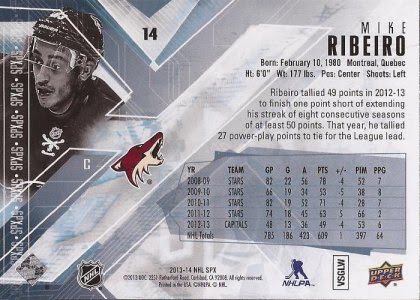 Here's the back. Oh boy - the same image a 3rd time. Only 5 years of stats, which seems to be the norm now on hockey releases. Only the team logo and the name in the stat lines. No mention of the city. Weird.

Ok - so that's the four. Technically, the Ribero was the last card of the pack. In place four was a card that was already in a penny sleeve. That was kind of strange. But considering what it was, I will give Upper Deck some slack. 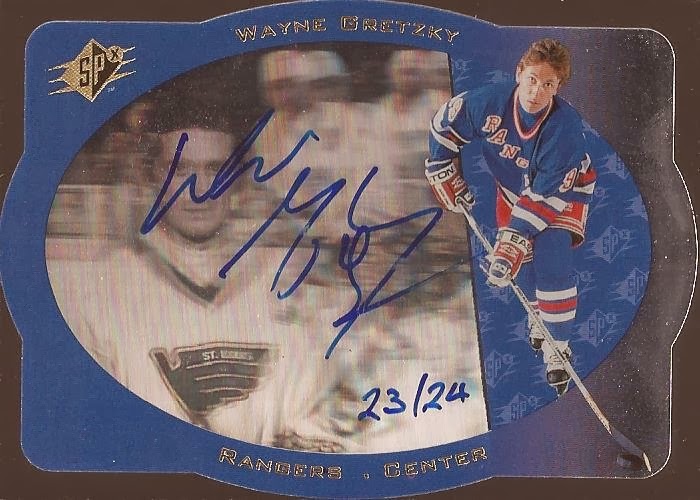 Are you kidding me?!?!?! This is a 1996 SPx buy back that was hard signed by the Great One. You can see the hologram in the middle with Wayne in those sad Blues sweaters. However, we get 99 in the Rangers to the right. This, by far, is the greatest pull of my life. And to think I was commenting to the LCS clerk Jeff before I picked this pack that I would probably pull a Clutterbuck relic or something. It turns out the penny sleeve held the COA that goes along with this card/autograph. Great finish for a $10 pack.

Great pull if you ever want to get rid of it let me know! lol Thanks,Dion